Could our Homo sapiens sapiens protruding chin have been culturally genetically selected to resemble a valued egg form, as evidenced by its exaggerated depictions and possible cosmic symbolism in some examples of portable rock art? Find and photo by Mark Jones, at Piney Point, Maryland
A sculpted human stone head with an exaggerated, egg-like chin.

This is a polymorphic sculpture with a combined animal (horse) and human depiction. Mark is a fossil and artifact collector who does some underwater artifact collection at Piney Point. Mark independently identified the "one eye open, one eye closed/missing" Middle Paleolithic-based motif in his locale and has appreciated the subtlety of art finds, which he is able to distinguish from natural forms because of his rock and fossil knowledge. He identified this as an intentionally sculpted artifact. I was able to travel to Piney Point to visit and examine Mark Jones' collection of figure stones and I agree. This artifact is about 8cm tall. 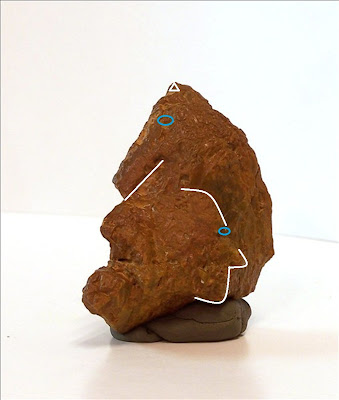 Art scholars sometimes refer to these as "nested images" because they are interwoven into another, larger, image form. They are like the "Hidden Pictures" exercise in the magazine "Highlights for Children"- they are not immediately obvious because one is struck by the overall image of the grotesque face- but they are meant to be found by the observer. This probably happened relatively quickly for humans contemporaneous to this sculpture as they had cultural iconographic context to inform them. For me, I did not notice the horse until it was pointed it out. The horse image on this sculpture form implies a likely Pleistocene age for the piece because horses became extinct in North America at the Pleistocene/Holocene transition, excepting some isolated Holocene stragglers. 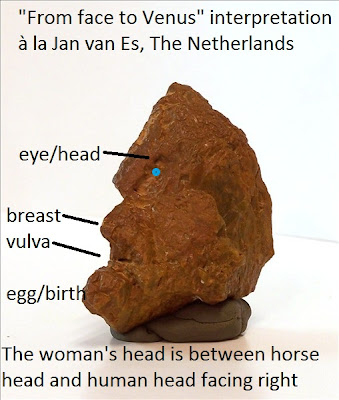 Archaeologist Jan van Es of The Netherlands, with 40 years figurative rock art investigation experience, writes "... During all those years of research I noticed that, besides all forms nature offers in rocks, trees, fruit, animals etc., the egg-shaped rocks were considered as the most ideal kind. The big cosmic egg, the germinal force and origin of life, seems to have been a very important notion and turns out to be a main line in the images..." van Es has described the egg-like chin as dropping from the mouth, which also sometimes serves as a woman's vulva in an alternate view of certain sculptures he has identified. Please note how the woman's 'eye' location (little blue circle) also serves as the eye for the grotesque face depiction. This 'shared component' aspect is seen commonly in portable rock art. 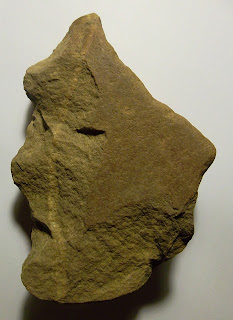 This was found in situ by archaeologist Jimmy Groen of Maastrict, The Netherlands. It is from the Belgian Kempen region and was recovered in soils dated 450,000 to 300,000 years before present. Ken Johnston interpreted this as a polymorphic sculpture with the 'chin as egg' motif.


Could our Homo sapiens sapiens protruding chin have been culturally genetically selected to resemble a valued egg form, as evidenced by its exaggerated depictions and possible cosmic symbolism in some examples of portable rock art?

We have examples of portable rock art which seem to invoke important cosmic egg symbolism in representations of the human chin, and an example such as this one which has a skull/mask with an egg-chin nested into a bird figure's head.

These examples and many more raise the possibility the "forward moving chin" seen in the development of anatomically modern humans, and also in the Neanderthals' fade to black, was the result of culturally mediated genetic selection* favoring this symbolic egg form and it being changed through time over our entire surviving genus by advantaged reproductive input from people with a lineage of this mating preference.  [*or our "self-domestication," a process described by Robert G. Bednarik in The Human Condition, Springer, 2011]. 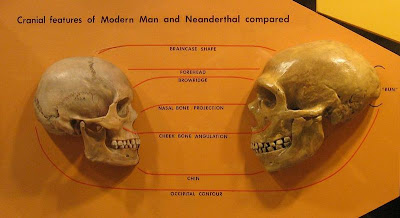 "Anatomically modern humans are distinguished from their immediate ancestors, archaic Homo sapiens, by a number of anatomical features. Archaic Homo sapiens had robust skeletons, indicating that they lived a physically demanding life; this may mean that anatomically modern humans, with their more gracile frames, had become more dependent on technology than on raw physical power to meet the challenges of their environment.

Archaic Homo sapiens also had very prominent brow ridges (protruding layers of bone above the eye socket). With the emergence of anatomically modern humans, the brow ridges had significantly reduced, and in modern humans they are, on average, barely visible. Another distinguishing feature of AMH is a prominent chin, something which is lacking in archaic Homo sapiens." (emphasis added).

AMH commonly have a vertical forehead whereas their predecessors had foreheads that sloped backwards. According to Desmond Morris, the vertical forehead in humans not only houses larger brains, but the prominent forehead plays an important role in human communication through eyebrow movements and forehead skin wrinkling." - Wikipedia

The human chin has long been an enigma to Physical Anthropology: Journal of Human Evolution, Jeffrey H. Schwartz and Ian Tattersall, The human chin revisited: what is it and who has it? (1999)

Maybe the answer lies in the realm of Cultural Anthropology, where its morphology was desired by certain peoples for ideological purposes. Perhaps the egg-like chin was perceived as a hierophany, a manifestation of the sacred. 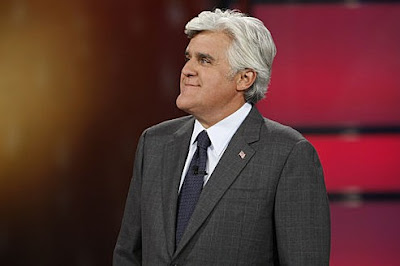 (left) This is identified by Mr. Dodd as a large chinned human face sculpture looking right

(right and below) Depicting the human image upside down, one may see a perched bird image according to Dodd. Here, the chin is not just the egg, but the bird itself, as if a "time lapse" snapshot view into the 'egg/chin hatching into a bird' motif. 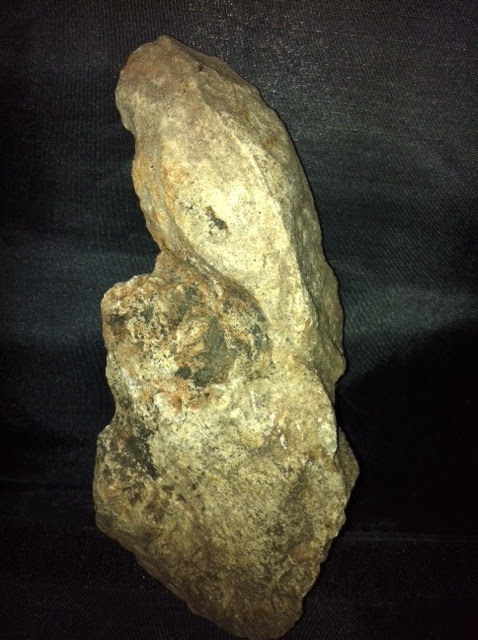 "Perched bird"
Sexual dimorphism in chins demonstrated by anthropologists in 2010 indicates sexual selection operators were indeed at work. However, the question remains. Why, not how, do humans have chins?

Possibly, some of our ancestors had a sexual affinity
for a symbolic cosmic egg form
in their mates' facial structures.