Roll back the Iron Age: A metal and slag mammoth sculpture and a metal spearpoint with a facial profile from the Arkfeld site 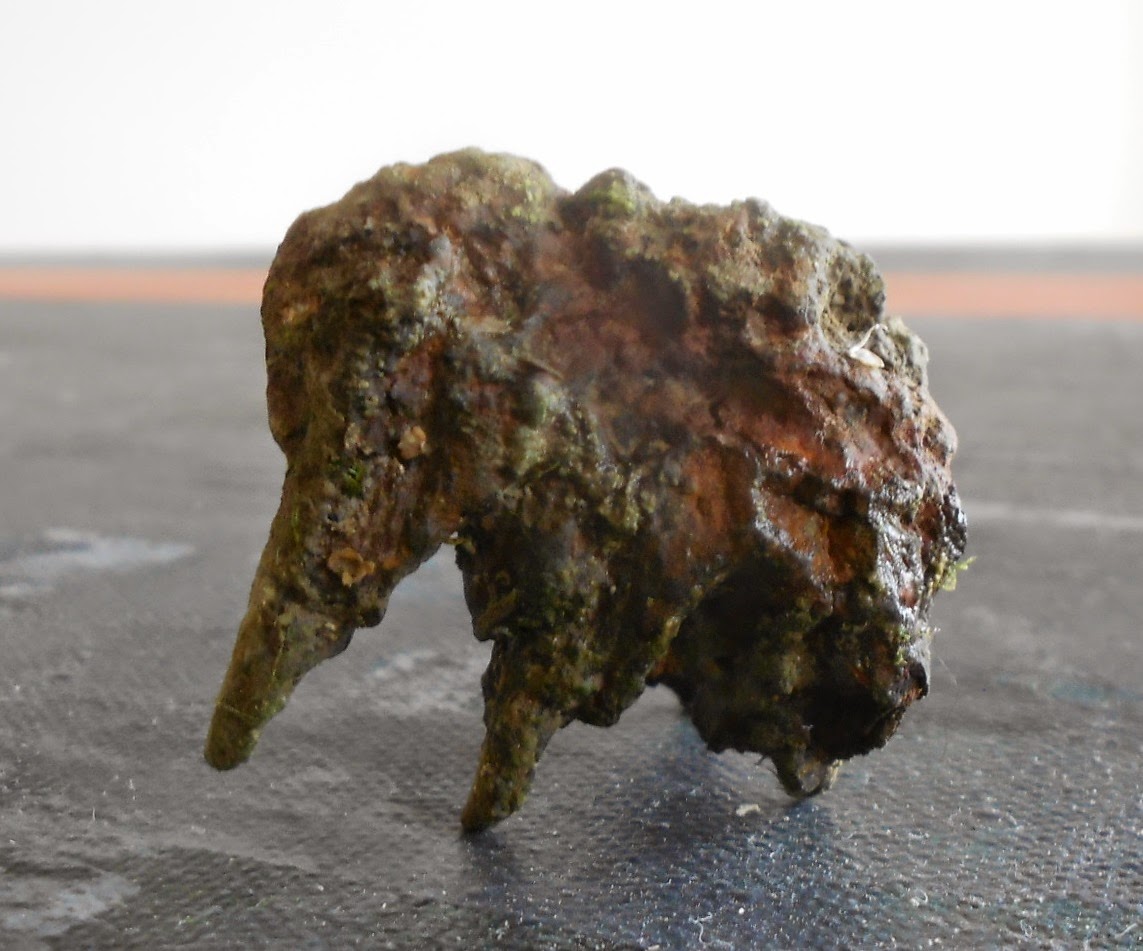 The mammoth sculpture was found in the context of many portable rock art mammoth figures from the Arkfeld site, #44FK732. 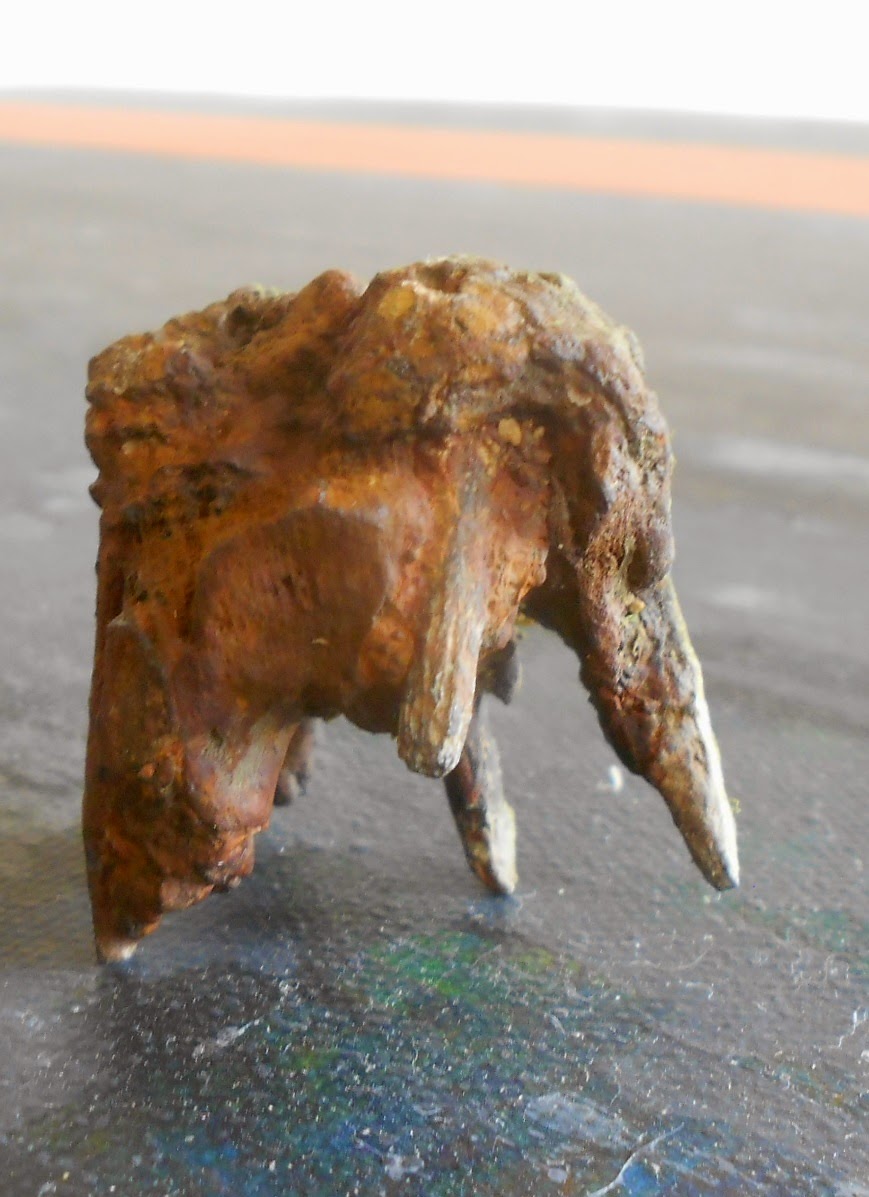 The mammoth stands on three legs. The 4th leg has disintegrated but a stub remains. The legs and stub are metal according to Mr. Arkfeld. The mammoth's trunk is the projection at far right. 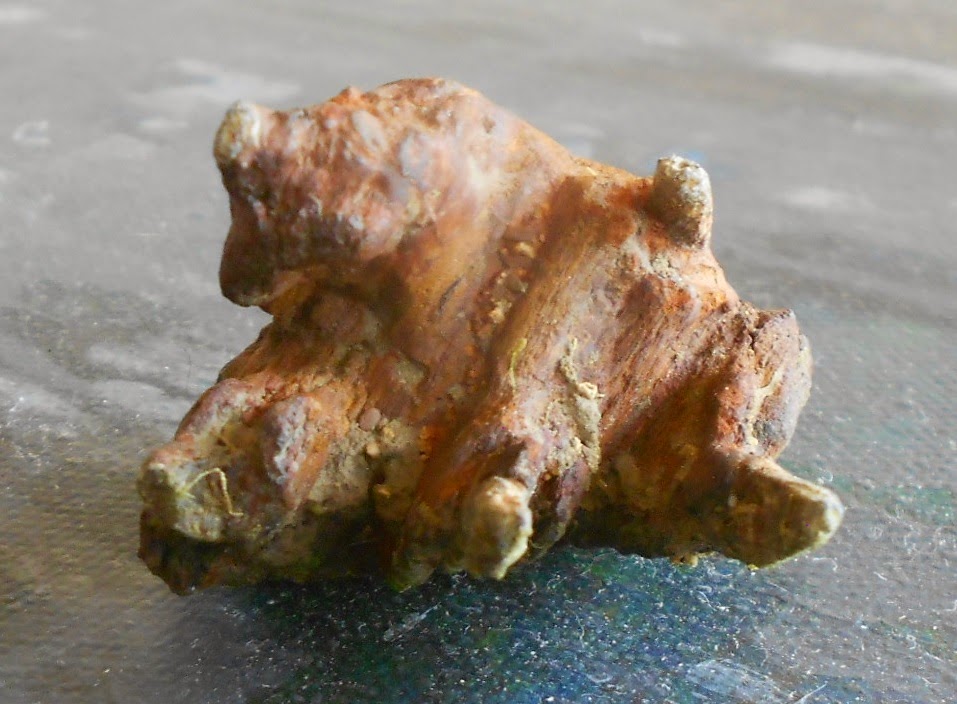 View of the bottom of the mammoth figure. The mammoth's trunk is the projection at far right. 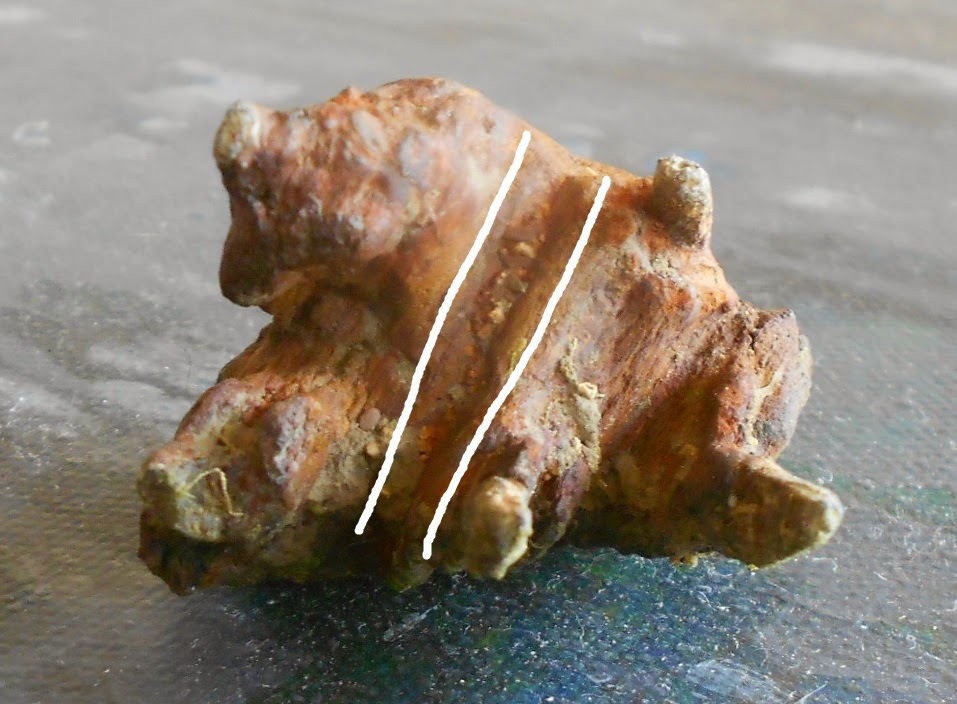 There may be some evidence of human work to shape the mammoth sculpture while the material was still molten. It looks as if a straight object was pressed into the belly of the mammoth to define the areas which separate the front legs from the back legs. 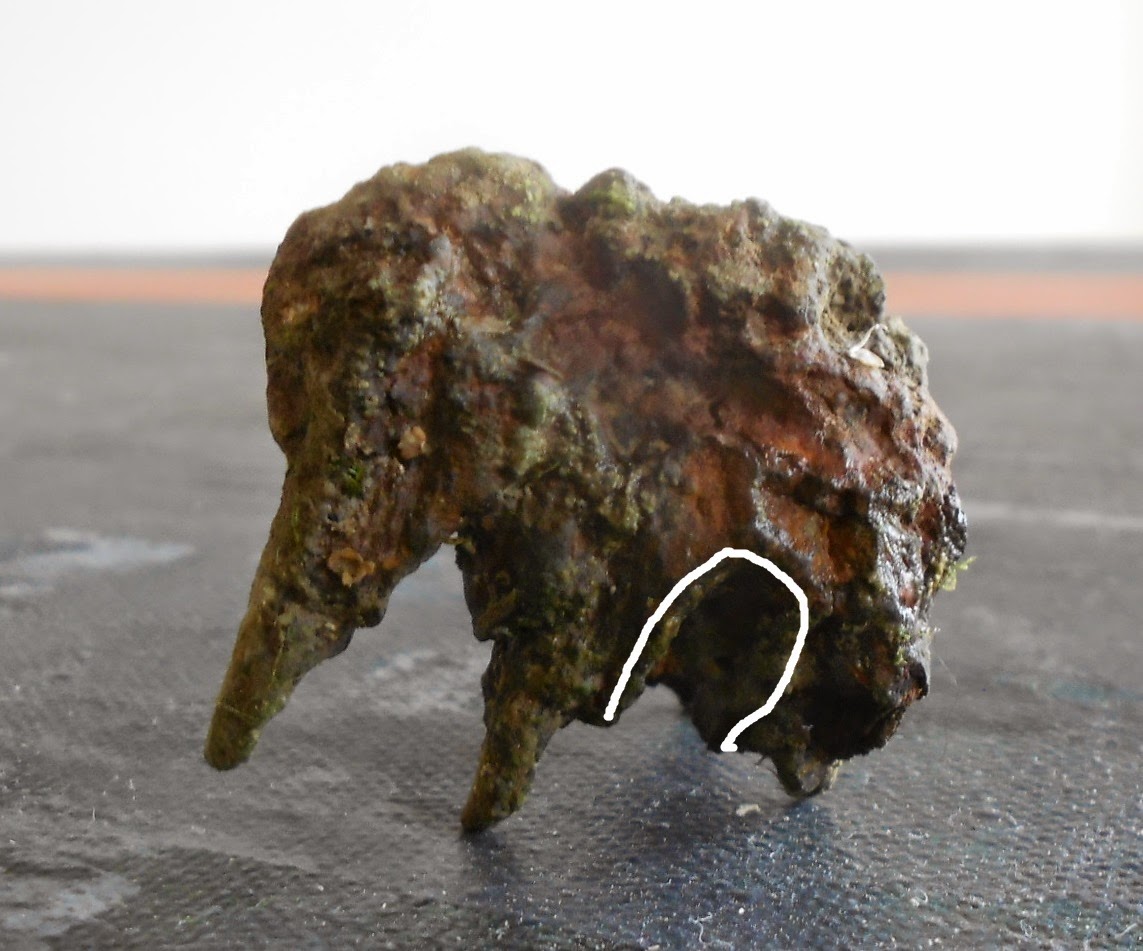 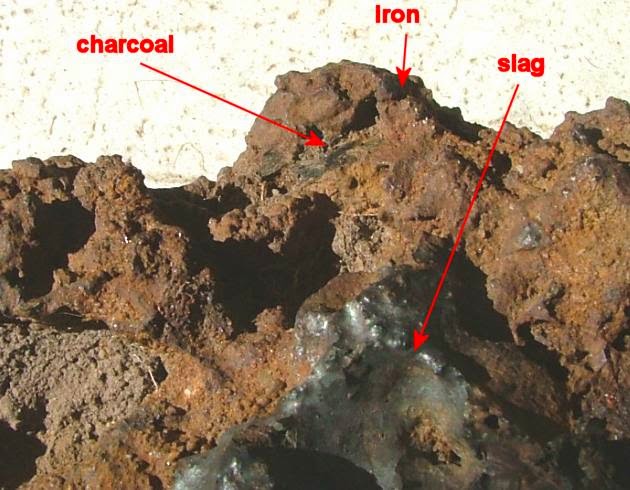 Site owner and amateur archaeologist Adam Arkfeld submitted an organic-bearing sample of slag from the site for AMS radiocarbon dating and has received a date of >43,500 years before present from Beta Analytic Labs. He is planning further dating tests. The presence of charcoal in some slag as illustrated above can allow the time frame for the creation of the object to be determined.

Recent comments made to this post by Alan Day refer to this information from the Beta Analytic Lab web site which have become part of this post as of 9/9/2014:  "Beta Analytic has set a real and conservative limit of greater than 43500 BP when the activity of the material is statistically the same as the background. This is a credible number based on the lab's own internal AMS limits. As such, Beta Analytic does not quote finite ages in excess of 43500 BP. Samples that yield an activity at or below this are reported as "greater than" 43500 BP."

Update 10/08/2014: personal communication from Adam Arkfeld "Jack (the archaeologist willing to help Mr. Arkfeld) had a conversation with one of the techs at Beta and was told that the date provided on the last sample is a reliable minimum age. He ensured Jack that the date is conclusive in that it is at least 43,500. The guy is confident that the sample is ancient. Jack is announcing the date at his upcoming presentation in Richmond this weekend."  The tech is essentially saying it is not just "background noise" from the infinite past. 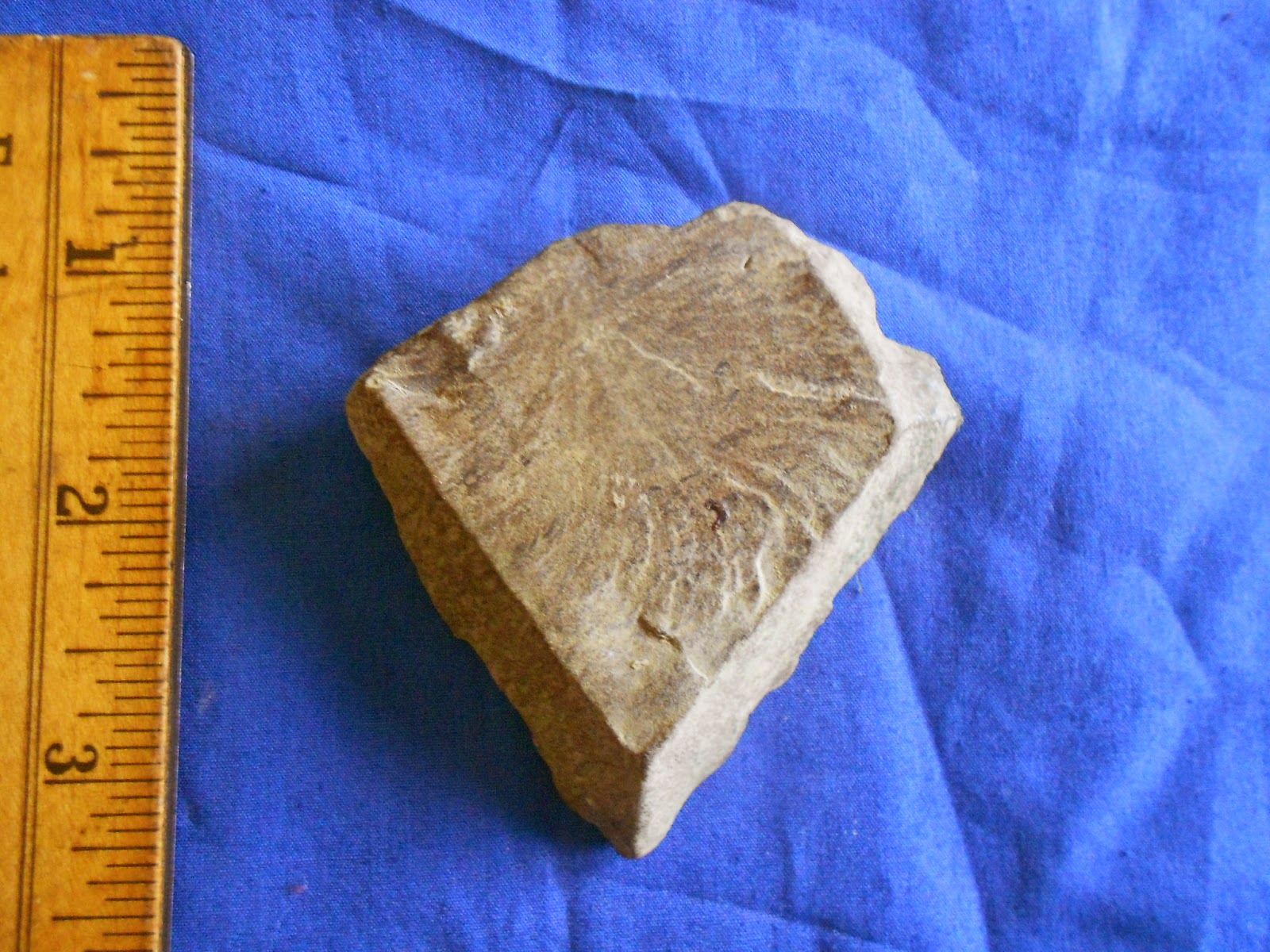 A Levallois technology tool from the site identified by Mr. Arkfeld

In stereotypical artistic convention as seen on this blog and documented by scholars such as James Harrod, Ph.D., a human face left profile image has been worked into this metal spear point or dagger when it was hammered out. Remnants of it can still be seen after all this time. The markups highlight the eye, nose and mouth which were likely intended to animate or "confirm the life of" the artifact. It has two distinct nostrils.

For this author, the presence of the face configuration is an indicator the spear point was not produced in historical times.

It is indeed smiling.
Posted by Ken Johnston at 6:02 AM