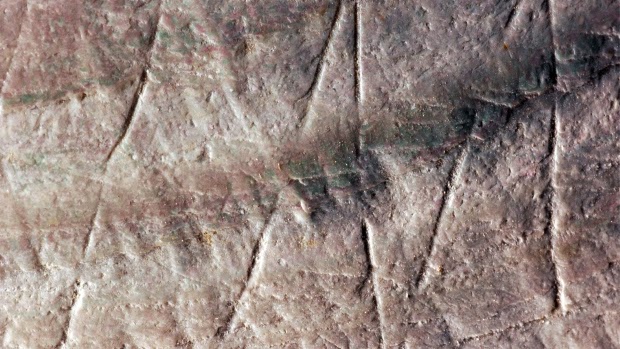 From nature.com: A zigzag engraving on a shell from Indonesia is the oldest abstract marking ever found. But what is most surprising about the half-a-million-year-old doodle is its likely creator — the human ancestor Homo erectus.


The manufacture of geometric engravings is generally interpreted as indicative of modern cognition and behavior. Key questions in the debate on the origin of such behavior whether this innovation is restricted to Homo sapiens, and whether it has a uniquely African origin. Here we report on a fossil freshwater shell assemblage from the Hauptknochenschicht (‘main bone layer’) of Trinil (Java, Indonesia), the type locality of Homo erectus discovered by Eugène Dubois in 1891 (refs 2 and 3). In the Dubois collection (in the Naturalis museum, Leiden, The Netherlands) we found evidence for freshwater shellfish consumption by hominins, one unambiguous shell tool, and a shell with a geometric engraving. We dated sediment contained in the shells with 40Ar/39Ar and luminescence dating methods, obtaining a maximum age of 0.54 ± 0.10 million years and a minimum age of 0.43 ± 0.05 million years. This implies that the Trinil Hauptknochenschicht is younger than previously estimated. Together, our data indicate that the engraving was made by Homo erectus, and that it is considerably older than the oldest geometric engravings described so far. Although it is at present not possible to assess the function or meaning of the engraved shell, this discovery suggests that engraving abstract patterns was in the realm of Asian Homo erectus cognition and neuromotor control.

The Bilzingsleben, Germany, engravings seem to be missing from the archaeological context described by Joordens et al. (2014) so more information on this is presented below.

THE GRAPHICS OF BILZINGSLEBEN: SOPHISTICATION AND SUBTLETY IN THE MIND OF HOMO ERECTUS, John Feliks
Abstract:


In 1988, Dietrich and Ursula Mania published images of unmistakably deliberate engravings on bone artifacts dated between 320,000-412,000 years BP, found near the village of Bilzingsleben in central Germany. Contrary to traditional notions of early peoples, Mania and Manias’ preliminary interpretations suggested that these markings implied the existence of advanced human traits, which included abstract thinking, language, and a “concept of the world.” In this presentation, I will demonstrate that the Bilzingsleben markings go well beyond these already stunning assertions, and document a very large number of graphic innovations and highly advanced intellectual traits in Homo erectus, innovations and traits that have long been regarded the exclusive domain of Homo sapiens. In fact, the artifacts contain so much information that, collectively, they constitute nothing less than a detailed and expansive map directly into the extraordinary mind of this early ancestor. I will demonstrate that the markings reflect graphic skills far more advanced than those of the average modern Homo sapiens. A new list of qualities, abilities, and innovations which must now be credited to Homo erectus, and which are directly indicated by the markings includes: abstract and numeric thinking; rhythmic thinking; ability to duplicate not only complex, but also, subtle motifs; iconic and abstract representation; exactly duplicated subtle angles; exactly duplicated measured lines; innovative artistic variation of motifs including compound construction, doubling, diminution, and augmentation; understanding of radial and fractal symmetries; impeccably referenced multiple adjacent angles; and absolute graphic precision by high standard and, practically, without error. Each of these will be demonstrated visually. Hence, the following advanced cognitive qualities may be quite easily assumed for the species Homo erectus by way of geometric analogy: interrelationship sensitivity and complex organizational skill; language; use of metaphor and hidden meaning; philosophy; mysticism or other “spiritual” perspectives; and a general ability to discern, appreciate, and create the most subtle nuance within any area of intellectual endeavor.

Joordens et al. 2014 also make the claim for the Java shell engraving being the oldest known abstract marking in the world which needs to be seen in the greater ancient art context described by James Harrod, Ph. D., at originsnet.org and with more information presented in the paper below.

Palaeoart at Two Million Years Ago? A Review of the Evidence
Abstract:


Current archaeological evidence supports the claim that symbolic behavior, including palaeoart, first emerged in human evolution around 1 million years ago. The purpose of this article is to review archaeological studies that might support the hypothesis that the earliest palaeoart actually is evident around 2 million years ago. This review identifies nine Oldowan artifacts that have been proposed as possible non-utilitarian and possibly symbolic behavior. Among seven stone tools, the three strongest candidates are the Olduvai Gorge, the FLK North grooved and pecked cobble, ~1.80 million years ago, and MNK Main subspheroid with hexagon shape framing an apparent natural dot-and-undulating-line motif, ~1.5–1.6 million years ago, both initially reported and described by Mary Leakey; and the curated Koobi Fora FxJj1 “broken core” with inner rhomboid shape, ~1.87 million years ago. All six stone tools from Olduvai Gorge need scientific re-examination to determine their chaîne opératoire and assess non-utilitarian features. If even one of the Olduvai Gorge artifacts were validated as symbolic behavior this would indicate the emergence of palaeoart one million years earlier than current proposals. It would also suggest that Homo habilis/rudolfensis or a very early Homo erectus had substantially more advanced cognitive, design and symbolic competencies than inferred in current theories. It would constitute a challenge to develop more advanced cognitive semiotic and art-theoretic analytical tools for illuminating the role of such palaeoart in hominin cultural evolution.

This famous piece of red ocher from Blombos Cave, South Africa, dated to about 100,000 BP has a somewhat similar engraved pattern to the one on the shell from Java despite being separated by 400,000 years of supposed cognitive evolution. It seems more likely the capacity for symbol and art behavior dates to the origins of the genus Homo or even earlier as Feliks and Harrod have each postulated.
Posted by Ken Johnston at 9:24 AM