At two centimeters, simple pecked face on a pebble is microart from the Arkfeld site, #44FK731, Clear Brook, Virginia 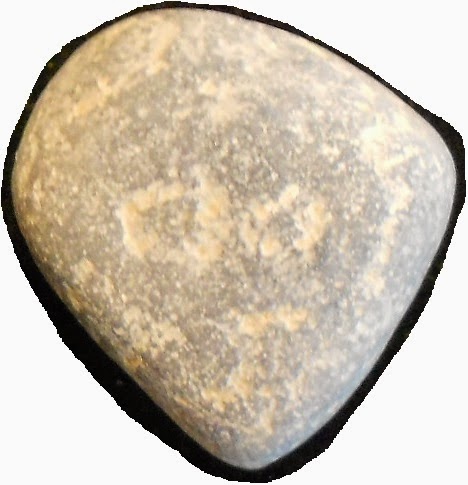 At two centimeters, simple pecked face on a pebble is microart from the Arkfeld site, #44FK731, Clear Brook, Virginia


Archaeologist Jan van Es of Roermond, The Netherlands, has described portable rock art under 2cm as "microart" and this pebble from Arkfeld qualifies as such. This piece could also be described as a portable petroglyph.

The eyes are completed pecked circles in the 4 to 5mm size range. Freehand pecking of the very small circular forms does not seem possible so it seems more likely there was an intermediate tool like a stone punch that could have been more precisely directed with greater control of the result. When the punch was in the correct position it was struck with a stone hammer to remove that spot of the stone's surface.
Posted by Ken Johnston at 9:11 AM