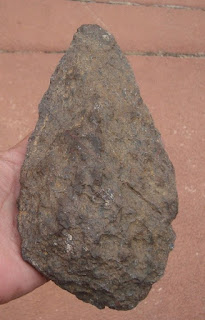 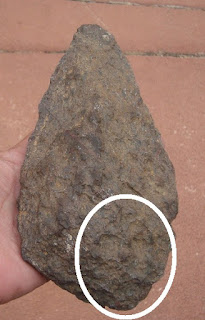 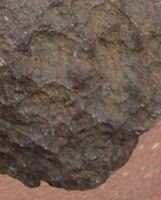 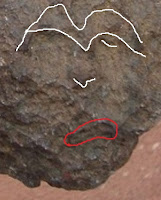 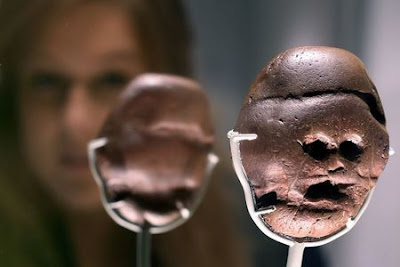 Posted by Ken Johnston at 12:36 PM No comments: 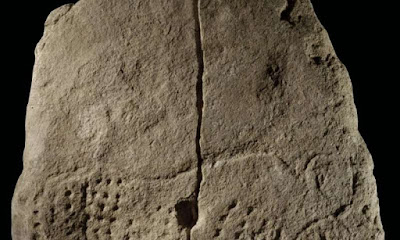 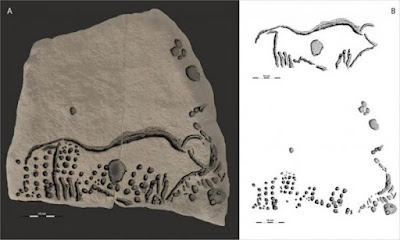 Scientists in France have discovered ancient pointillist engravings representing both a wild cow and a wooly mammoth. The engravings were made more than 35,000 years ago. Photo by R. Bourrillon 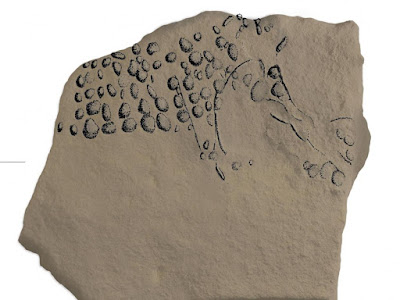 A drawing of the engraved stone highlights the individual pixels that make up a mammoth, or aurochs, facing right (R Bourrillon)

What could be the oldest images in the world have been discovered in France.

And the engravings of mammoths and wild cows known as aurochs were made from individual pixels – essentially the same technique used to produce images on computers and televisions.

The pictures are also being compared to the pointillism technique supposedly pioneered in the 1880s by artists like Vincent van Gogh and Georges Seurat.

They were radiocarbon dated to 38,000 years old, which could mean they are the oldest pictures ever created.

A painted hand silhouette found in Spain could be about 5,000 years older but its dating has been contested. An ivory sculpture of a female figure from about the same period as the French engravings was also found in southern Germany.

Professor Randall White, a New York University anthropologist, told The Independent the images were certainly “among the very earliest images of things we can actually recognise in the entire archaeological record”.

“It’s not so much the final effect that we found interesting, it’s the conception of it – the use of individual points to form the body or the outline of a figure,” he said.

“If you look carefully at the aurochs, there’s really a significant control of the line.

“And this is very early when people are really just beginning to grapple with the production of images."

“They have mastered some of the fundamental aspects of line and shape, but there’s clearly a long way to go in terms of precise reproductions.”

It is unclear why prehistoric artists decided to use a pointillist or pixel-based technique.

“It’s almost digital in its nature … why this fixation on dots, I’ll admit it’s a puzzle,” Professor White said.

“It’s not exactly pointillism but the principle is there, the construction of a form out of pixels.

“We’re quite familiar with the techniques of these modern artists. But now we can confirm this form of image-making was already being practiced by Europe’s earliest human culture, the Aurignacian.”

He said they had been excavating the site for 18 months before they found the images.

“The engraving was face down and we knew within these sites such things are possible, so we were taking great care,” Professor White said.

“After a year and a half of excavating, we finally extracted the object … it is one of the great moments of my career, that’s for sure.”
The discovery was reported in the journal Quarternary International. 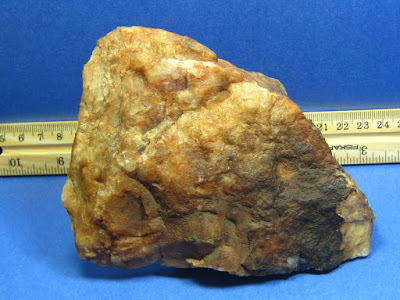 Buzzy Boles find, mammoth profile facing left with bison head profile looking right. The white stone at the far right is the 'muzzle' of the bovid. I think this may a representation of the Woodland Musk Ox because of what appears to be a symbolic 'downturned horn' visible in the middle lower edge as a curved and pointed feature of the stone.

North America has a similar sculptural tradition of making a combination of mammoth and bison as is also observed in several well known early European art pieces.
Posted by Ken Johnston at 9:32 PM No comments: