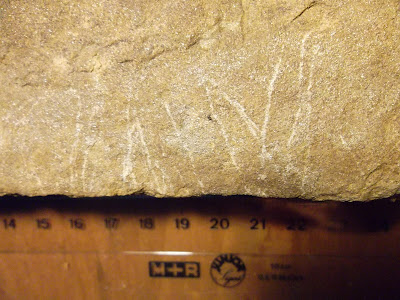 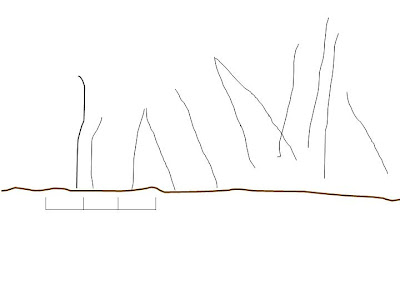 Jimmy Groen reports his discovery: "Yesterday I found a part of a large shale rock, that was found in the context of various types of pebble tools, estimated to be from the former Maas/ Meuse channel edge, from an estimated pre-Saalian date, (indicated by tool technology and horizon context (= dark yellow loamy fluvial sand deposition containing angular pebbles).

The (broken) part of this more rather large and very thick shows small lines, intentionally made on the edge. (see a drawing and a photo of the object). The object is only partially visible, the big part is covered in sand. I found an article on the subject.  The article is called: 100,000 year old rock star. The carvings look a bit the same..." -Jimmy Groen, March 14, 2012

As Jimmy found, scholars and researchers give attention to incised lines on rocks found in an archaeological context. When they are found and identified, they need to be documented and described and inventoried with other site artifacts. Jimmy's tracing of his lines on the rock is a perfect way to record and communicate to others the nature of the lines.

John Feliks, a founder of the Pleistocene Coalition, has written a series of four articles on incised line rocks from the Bilzengsleben site in Germany. His work demonstrates beyond any doubt the highest levels of cognition, creativity and intelligence among Homo erectus peoples around 350,000 years ago- like our own today. He does this using a series of falsifiable mathmatical and geometric proofs so hard science has been brought to bear on the topic of incised lines. Links to the article series follow:

Part 1: Proof of straight edge use by Homoerectus

Part 3: Base grids of a suppressed Homo erectus knowledge system

In America, some of the very few confirmed pieces of portable rock art with incised lines are from the Gault site in Texas. Of 135 or so pieces, only about a dozen are confirmed from Clovis culture levels and others are earlier or later or undetermined. 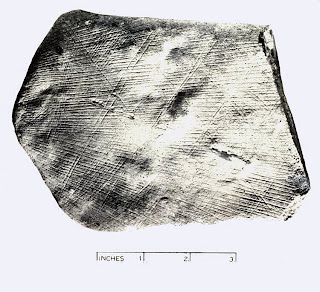 This piece (from Gault, TX) demonstrates radial lines originating from the point on the left side to cross the entire plaque. There are parallel lines in a diamond pattern laid over the radial lines. 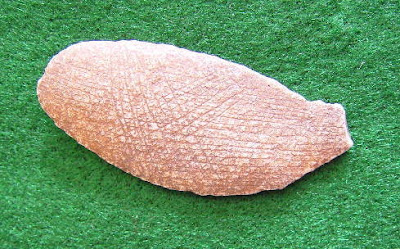 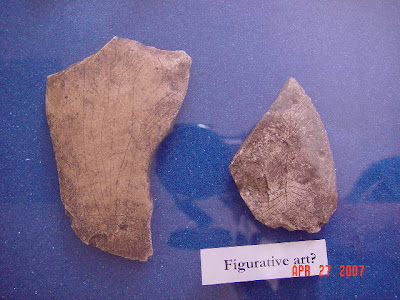 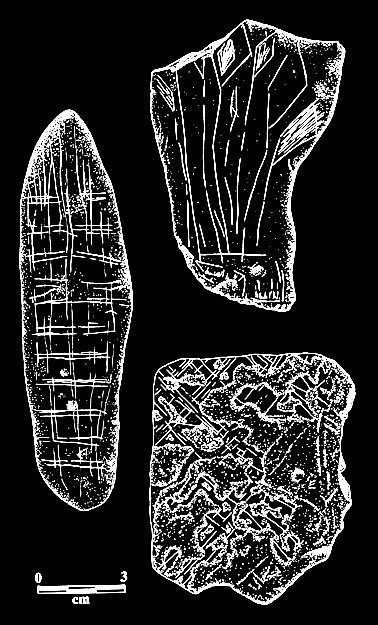 Illustration of some of the Gault art objects. 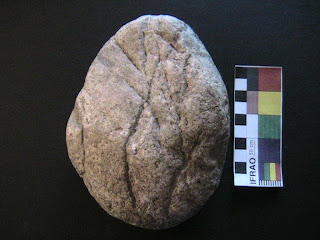 An Oregon find, near Columbia River at Irrigon. 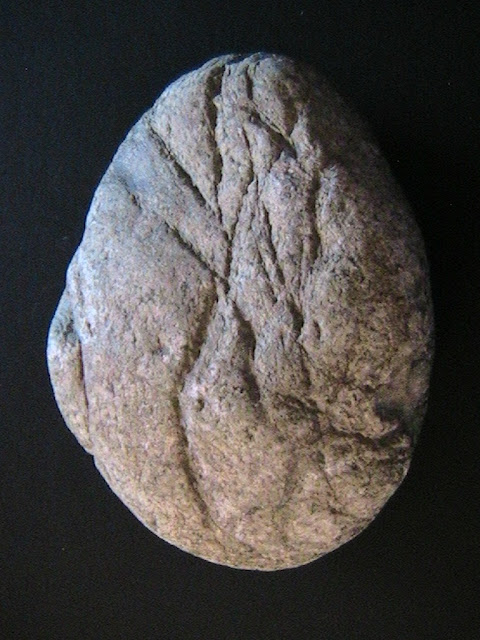 Blog publisher Ken Johnston studied this golden composite ellipse shaped rock with branching incised lines and discovered a pictograph of a bird emerging from an egg while being fed by mother's beak and while being leered at by a feline.  So, a seemingly unimportant rock with some lines on it may contain valuable information for study by archaeological science.