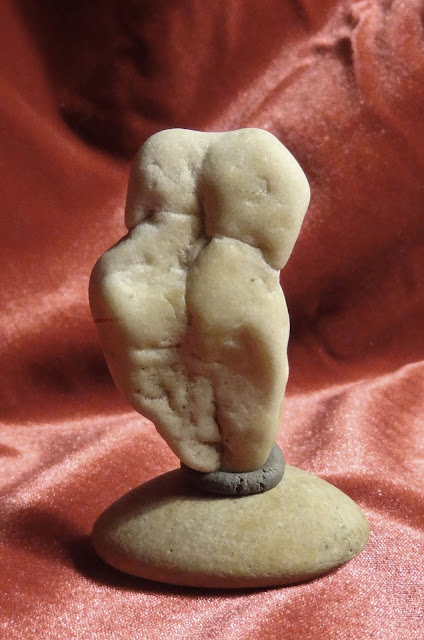 "Pissy Birds"
Found and interpreted by Mark Jones of the Washington, D.C., area 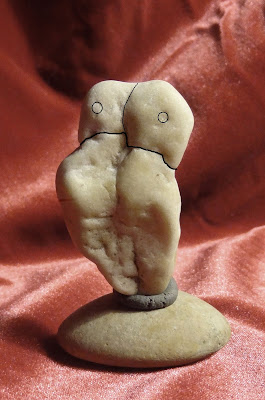 Mark Jones is a fossil hunter who accesses many of his collection sites by boat at Piney Point, Maryland, at the confluence of the Potomac River and the Chesapeake Bay. Mark also became an avocational archaeologist because he often finds Native American artifacts while looking for fossils. Because they look very closely at the rock material they are investigating, Mark and his wife began to notice patterns in many of the rocks which they could not attribute to natural processes due the large numbers of them in concentrated areas. In addition to the "one eye open, one eye closed" motif seen in European portable paleoart, they noticed a motif of paired birds, courting birds or "love birds." The area today remains the most significant flyway for birds to migrate and nest along the eastern coast of the United States. (click photos to expand)

One is immediately struck by the female figure. The natural rock lent itself perfectly to the artist who made incisions to better define the rump transition into the lower back. That same line also creates two bird heads which have protruding beaks and one eye each in their profile view, quite distinctly facing away from each other. Contrary to the normative theme of love birds, which Mark and his wife call "Kissy Birds," this figure stone seems to depict the birds in a human-like position of being "back to back" while angry. So, they call this figure stone "Pissy Birds."

In the first of the three photos in this series, Mark Jones provides a view of the pissy birds.

In the middle photo, when the stone is viewed upside-down, a female figure of a torso from the front may be seen. At what would be nape of the neck of the full-busted woman, two elements come together at the top center of the figure in a "kissy birds" form. Jan van Es has described the importance of the "cosmic egg" in paleoart and one may interpret the buttocks and breasts as somewhat egg-like, perhaps symbolic of the fertility implied by the figure.

In the last photo is a view of a buzzard or vulture from the left rear where the rounded part at the very top is the head of the bird with its beak visible to the left.  Finally, on the posterior of the vulture, double incised lines define the hairline of an anthropomorphic face with two manufactured eyes and a slightly grinning mouth which may be a natural stone feature.

Alan Day of Day's Knob uses the term "janiform" to describe figure stones with two creatures facing away each other like Janus of mythology. So, this may be thought of as a kind of "double janiform" with the pissy birds and the vulture and the face.

A special thanks to Mark Jones for sharing his figure stone and for providing such excellent photographs. Here is a link to the original posting of a "Kissy Birds" figurine identified by Mark.