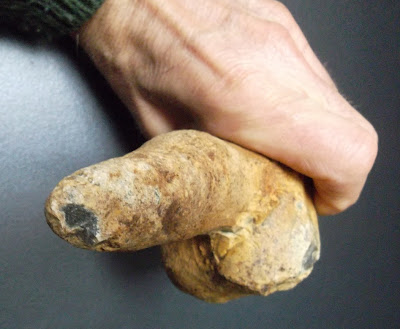 Exclusively for portablerockart.com, archaeologist Jimmy Groen writes of his find: "At a site at the plateau in the Belgian Kempen, where some drain channels were made, I find many pebble tool artifacts. Some of the artifacts were found in situ, in a reworked early- Saalian horizon, which means they were made before the Saalian period, most probably before 300.000 BP. This is also, because I found small tools, like micro choppers. Tomorrow I go to France to see the French archaeologist H. Beaudouin, and I will show him tools and debitage waste- to discuss them. In this pebble tool assemblage I found this remarkable object, I believe everybody has the same imagination about it: like a 'phallus symbol"- another form of iconicity?

When I look for artifacts, I see many, many pebbles. This type of pebble, fluvial flint is rare in the Kempen area, I even cannot remember having found and seen it in the Kempen before. But, the site where it was found is unique, as it is the last final Cromerian Period (ca. 600.000 BP- 500.000 BP) area in the Kempen. Flint (in the form of small tools) were found in the context. 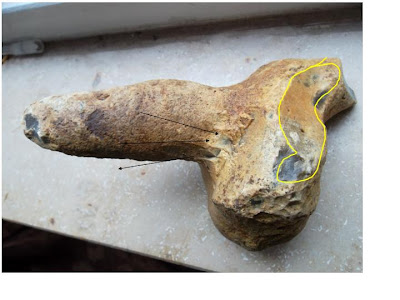 It is realistic, so maybe it was used for some fertility dance/ritual, or whatever symbolic. About the object, there might be some little retouch (marked with the black little arrows). Another remarkable thing is, the whole object is coarse, except the handle: exact two places at the side of the handle are patinated ( smooth, shining) maybe from handling the object(on the photos, marked with the yellow line)." -Jimmy Groen, Vaals, The Netherlands 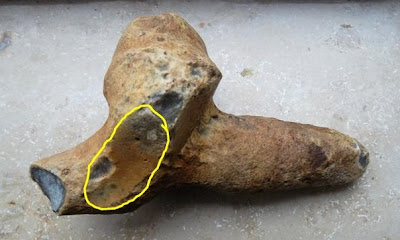 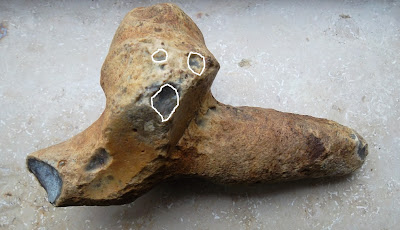 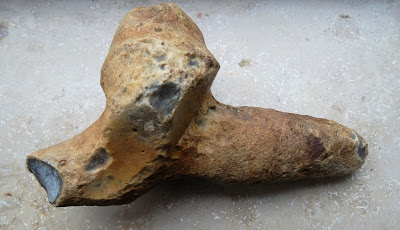 In a separate analysis by Ken Johnston, in this view, the object from Belgium, the "Kempen stone phallus," takes on a zoomorphic appearance where the rounded portion depicts the head, two eyes and mouth of a creature.  It could be taken as a lion in left profile lying down while stretched out and turning toward the viewer and letting out a "roar."  The stem at left is the front legs, and the stem at right is the back and body of the animal.

A cuttlefish fossil cast resembling a flaccid penis was recovered from a former dwelling floor in Morocco's Sahara desert and determined to be completely natural.  As a "manuport," not modified by humans other than being recognized, moved and likely curated, it was dated to the Final Acheulean at around 200,000 years old.  Thanks to originsnet.org for the link to information about the Erfoud manuport object.

The Belgian "Kempen Stone Phallus" discovered and identified by archaeologist Jimmy Groen is significant for the following reasons:

It was found in an older archaeological context than the Erfoud, Morocco, cuttlefish example, among tools from a unique industry.

It is a highly exotic lithic material compared to other materials from the same site, clearly at least a manuport.

It appears to have evidence of patination of the correct surfaces which would have contacted a human hand while the object is optimally held using its handle-like feature.

It may indicate retouch by the artist to enhance the phallus-like appearance of the rock.

It may be a polymorophic sculpture, with a zoomorphic creature, possibly a feline, depicted when the object sits upright.

Plausibly, it may have been used as a functional item, icon also as tool.
Posted by Ken Johnston at 3:58 PM