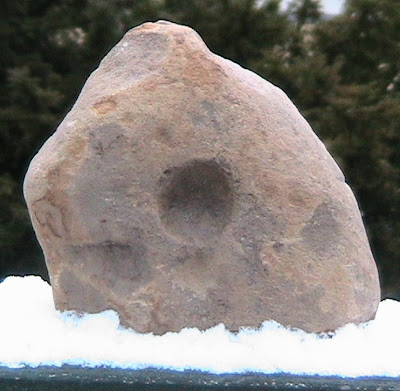 Pitted artifact found by Ken Johnston in Perry County, Ohio
This artifact may include imagery of the Columbian mammoth, species identifiable by the "bump" depicted at the top of the head. 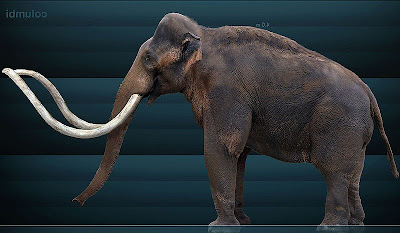 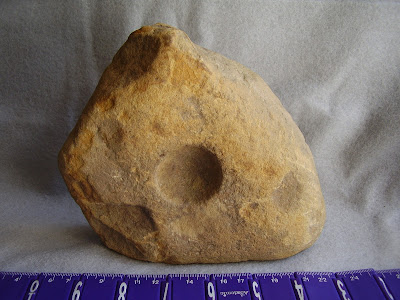 Buckeye Lake mammoth cupule stone #1 (of 2) was found in the disturbed soil of new subdivision road construction activities, on the south shore of Buckeye Lake, Perry County, Ohio.  Cupules, often identified by mid-west American archaeologists and collectors as "nutting stones," or "paint cups," or "grinding hollows," often appear to have had very limited or no evidence of use as tools.  The Buckeye Lake, Ohio, examples have discernible peck marks lining the cups, seemingly untouched by human action since the time they were created.  The 3 cups on the 2 stones seem to have been created under a preconceived idealistic form within definable size and shape parameters. This raises the possibility they are in fact symbolic cupules and were never used to crack nuts open.

To date, only a few proboscidian images have been documented in North America.  Examples are the Old Vero Beach Mammoth/mastodon (Purdy at. al. 2010), the Utah petroglyph recently described by Malotki and Wallace (2011), and Juan Armenta's 1959 find in Mexico.  Please see Pleistocene Coalition News, several issues, link is on right screen panel for free newsletter.  These images are all similar in that they are glyphic representations by use of incisions or organized pecking ("A line is a dot that went for a walk" -Paul Klee) made on stone or bone.  They are essentially "line drawings" of proboscideans.  Archaeological investigators would do well to consider the possibility of such imagery expressed in portable rock sculpture form, often "almost invisible" (A. Day), subtle to our visual-media-saturated brains, invoking only the most essential visual elements to allow one to "assemble a picture," often incorporating natural stone forms, which can signal recognition and signification of these awsome animals by America's earliest human inhabitants.  All art requires some level of participation on the part of the receiver.  My opinion is archaeologists need to participate a little more in order to begin to understand what art so far removed in time from us is all about.  As Ohio figure stone investigator Alan Day of the Day's Knob site has taught, "Know what you see, don't just see what you know." 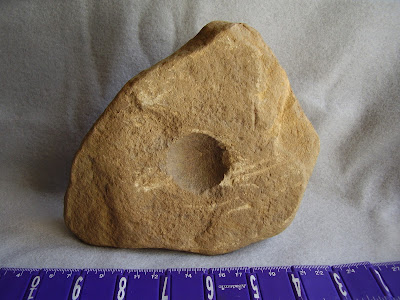 This is the reverse side of cupule stone #1.  It has a second cupule, exactly opposing the cupule on the other side, so the cupules almost touch at the center of the stone.  Human agency on this rock is not an issue and gauging the probability of intent to create mammoth imagery was given support by the recent find of a second cupule stone (photos below), which has significant agricultural plow damage.  It has the overall mammoth silhouette shape, remnants of diagnostic "bump" on top of the head, stands upright in correct ground orientation on the only edge which allows it to stand, and has evidence of the very bottom of a cupule on the reverse side which may have been destroyed by plow action in historical times. 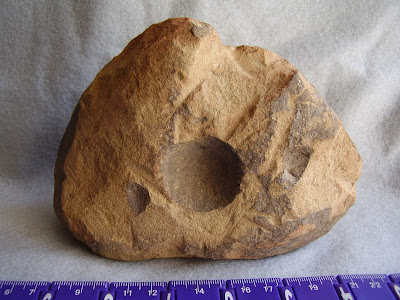 This cupule stone #2 was discovered 3 weeks ago in a display case at the Buckeye Lake Historical Society Museum.  A special thanks to museum director J-me Braig for arranging to loan me the artifact for photography and examination. A second cupule on the reverse side, like stone #1 has, may have been removed by plow action.  Just a tiny bit of the absolute bottom of a possible second cupule is found on the reverse side, exactly opposite the cupule seen in photo above.

Both Ohio cupule stones were found along the modern day shoreline of Buckeye Lake, a former Ice Age glacial terminus swamp/lowland, ephemeral lake area.  The cupules were found about 5km distance from each other.  Buckeye Lake is about 8km from the Burning Tree (golf course) mastodon find site.  So, there is record of human/proboscidean contact very close to the find sites of these possible mammoth sculptures. 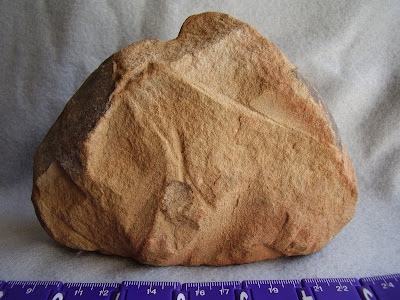 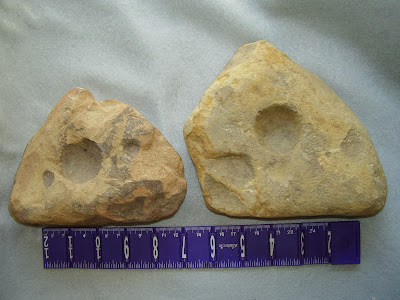 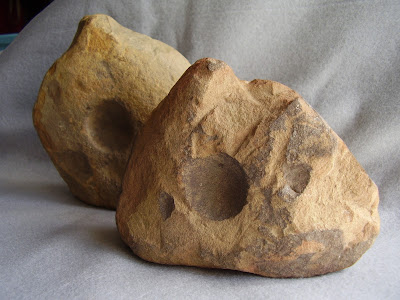 Mammoth cupule stone #2 at left, #1 at right, seen side by side for similarities in raw materials, cupules and "mammoth form" perhaps as intended as the cupules themselves.

To establish precedent creation of single cupule, portable, zoomorphic sculptures, from Neolithic age in Europe please see Don's Maps site for photos of "Altar from house No. 45, Lepenski Vir Ib, carved in the likeness of a fish, possibly a carp. Photo: "Lepenski Vir" by Dragoslav Srejović 1972." The site is located in modern day Serbia. 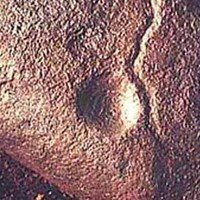 A cupule with touching meandering groove, from Auditorium Cave, Bhimbetka, Madhya Pradesh, India.  It dates from 290,000 to 700,000 BCE.  It seems so interesting that the behavior of creating cupules dates back so far in the "old world" and may have persisted into, or re-emerged, in North America. 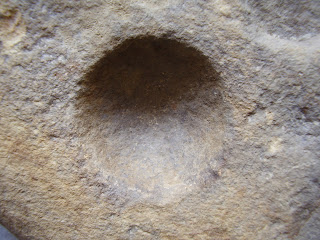 Perry County, Ohio
Posted by Ken Johnston at 11:01 AM