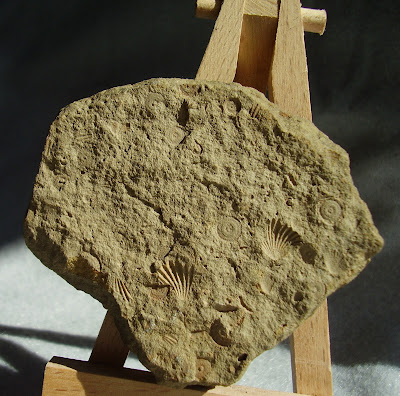 A worked, scallop-shaped, stone provides both "canvas and frame" for the artist to highlight round and scallop-shaped limestone fossils.  The plaquette seems to have had a number of discrete breaks around its edges, 11 by informal count, made to form the ultimate shell-like shape of the object.  The entire profile appears worked. 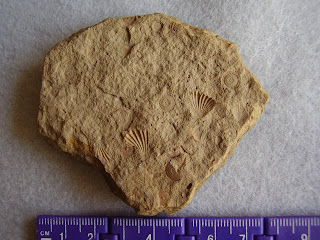 By virtue of her young age, Brennah T. has a good eye for anomalous and sometimes humanly worked stones, not being as weighed down by the culturally derived baggage which inevitably biases the older investigator.  This was a surface find from a prehistoric cultural site producing tools and lithic debris which she brought to my attention because "It's like a shell with fossils."  She picked it up as a possible artifact based on her familiarity with the appearance of them, its unique shape, and then noticed the little fossil inclusions 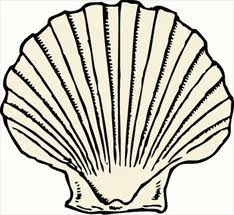 A scallop shell line drawing to compare to the outline shape of Brennah's find.  John Feliks, Pd.D., of the University of Michigan, has written on the subject of fossils inspiring early visual arts as evidenced by the archaeological record and his geometric analyses.  Dr. Feliks is a founder of the Pleistocene Coalition, a link found to that organization's web site is located in the right side screen panel.  Here is a link to his web site on the fossil art subject:

Impact of Fossils on the Development of Visual Representation by John Feliks, Ph.D. 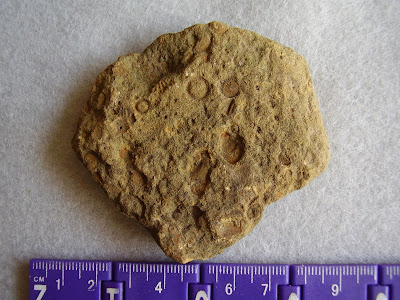 Reverse side of the artifact
(click photos to expand views)
Could this iconic sculpture be somewhat similar to the famous West Tofts, U.K., handaxe, where it appears the tool maker centered the design of the tool to feature a natural scallop shell fossil in the dead center as if to add an aesthetic, decorative, or even symbolic touch to the tool?  The shell shape does not appear to have a functional purpose but it is battered and marked as if it could have served various minor purposes on the reverse side.  Interesting circular incision marks, like those created from reed drills, could be located on this side 2.  It looks like prehistoric drilling could have been done to facilitate removal of the circular fossils from the stone, or that these fossils leave holes that look like reed-drilled ones when they fall out naturally.
West Tofts, U.K., example of Acheulean handaxe centered on fossil in raw material

Related to fossils, I made a blog posting in March regarding fossil-featuring to make a black fossil or stone inclusion the center of a "pressure flaked flower" on the top of a crude grinding flint tool.  It may be found at this link:

http://portablerockart.blogspot.com/2011/03/fossil-featuring-by-artist-at-center-of.html
Posted by Ken Johnston at 10:57 AM