Handaxes as handsculptures: Iconographic tools of the Acheulean may demonstrate figurative art dates into early humanity 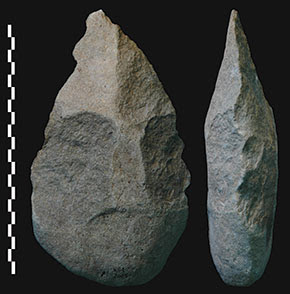 I noticed that just following the introduction to figure stones in Pleistocene Coalition News issue 13, http://pleistocenecoalition.com/newsletter/september-october2011.pdf, each of the three photos of the Mousterian bi-face artifact in KOD's artifact photography article may display separate examples of intended imagery.  Richard Wilson’s (U.K.) web site outlines “the problem” so well:  “Herein lies the rub, the bandwagon effect has exasperated the tendency for archaeologists to summarily dismiss potential palaeoart incorporated into lithics, often quoting the tendency for pareidolia. But it is exactly the same processes involved in pareidolia which were arguably at play when hominins began to appreciate visual-ambiguity, the earliest record of which is the Makapansgat pebble between 2 and 3 million years ago.” Wilson is author of the 2010 paper “Cultural cobbles or a load of cobblers? Identifying artefactuality and the detection of iconography” available at his web site http://www.palaeoart.co.uk/

I like to think I bring, at least then, a kind of “informed pareidolia” to the subject.  Herewith, referring to the photos in Pleistocene Coalition News link above:

Photo 1) a linier semi-circle, “mouth,” has been ground and/or etched into to place along an arc.  A deeper flake has been removed in the place for a right eye, so as differentiate the eye facets in a “one eye open, one eye closed” motif.  The affect results in something I will call a “winking smiley face” for descriptive purpose.  Lighter etching at the left eye, with dot in center, may have been made by the maker or someone later who recognized the smiley face.

Photo 2) a possible right facial profile is on the lower right corner of the artifact.  It is “in place” and “in-line” with multiple examples (some, but not all, with solid provenance) recently under email discussion by a group of figure stone students.  The discussion was prompted by my having noticed a quasi-anthropomorphic appearance on a face of the recently identified “oldest Acheulean handaxe” in the world (see Nature cover photos above).  It could be interpreted as a “frowney face,” mouth upside down from KOD's example.   It shows, whether intended or not, the first Acheulean tools by their fundamental morphology could perhaps have stimulated similar facial recognition on stone artifacts in prehistory or been the result of such cognitive facilities.  In addition to our own finds, we have seen several examples which I found with very little effort looking at artifacts on the internet.  I found an example somewhat similar to KOD’s, with what looks to me like a possible “robust-type” looking human face, available to see at the about.com Acheulean tradition page.  This speaks to what may be the relative ubiquity of iconography in the earliest of our designed tools.:
http://archaeology.about.com/od/aterms/g/acheulean2.htm

Photo 3) in this photo anyway, even with the scale, the base of the artifact could be interpreted as an “eye.”  The creation of the bi-face centered around the empty fossil space may have been well intended by the maker to create an icon, somewhat like the fossil-featuring on the famous West Toft’s handaxe described by John Feliks, knowing in planned advance an eye would result on the final base of KOD's artifact, with a very unique relief feature (the fossil depression).

Contrary to a “late emergence” for figurative art around 50,000 BCE, these images are quite figurative and should be found by scholars and researchers on supposed “tools” in drawers and display cases yet to be identified, which are also, or perhaps quite entirely, intended works of art.  They may be found to date deep into the Acheulean.  Many combined “hand axe/sculpture” artifacts have similar, subtle to our contemporary eyes, facial profiles incorporated into the right center, or below, space of an edge like KOD's.  He may even have, then, an example of a more describable class of artifacts. 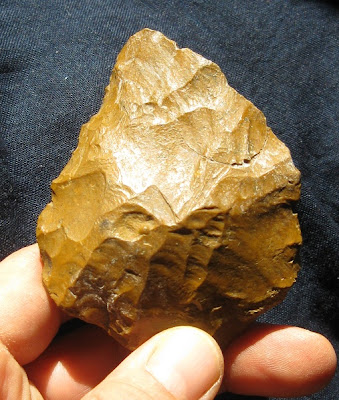 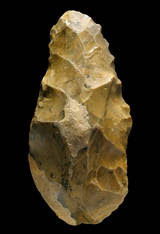 Face on right edge like KOD's example from PCN
Artifact from the about.com Acheulean tradition page. 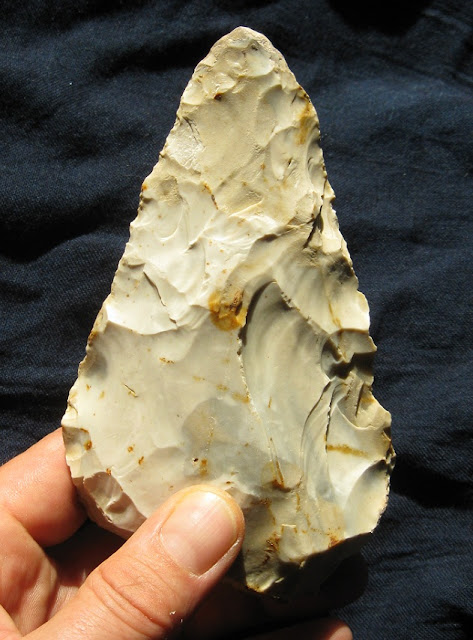 Face on right edge like KOD's example from PCN 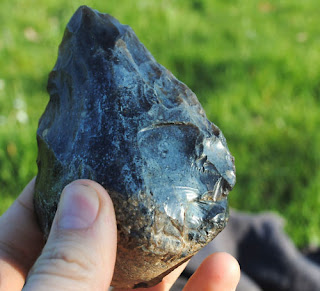 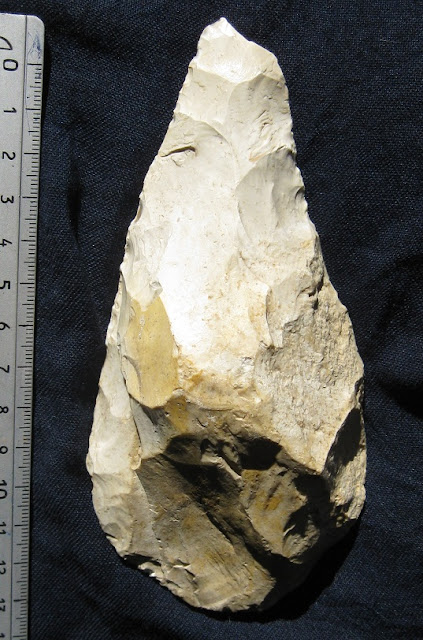 In the lower right of the Acheulean artifact here, is a worked, face looking off to the lower right corner of the frame.  It has two eyes, pointed nose, and an agape mouth.
originsnet.org Handaxe Sculpture Gallery


Ursel Benekendorff of Germany has been in the vanguard of Stone Age art study and research for 25 years. She well-documents examples of early imagery and iconography, with standardization apparent from the number of types she has identified and has among 2000 photographs at her website:

KOD's example from PCN may be yet another example of the type of artifact Ursel has described for over two decades and which continues to be forsaken by the archaeology establishment despite its common occurrence and seeming importance to understanding our full human heritage.