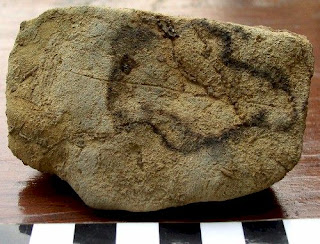 Engineer and archaeologist Alan Day, of Cambridge, Ohio, brought the concept of mid-19th century Frenchman Jacques Boucher de Perthes' "pierres-figures," translated as "figure stones," to North America with his popular daysknob.com web site nearly ten years ago.  The real estate he purchased for his aerial radio antenna turned out to be high ground which was producing stone tools and as Alan deduced after researching the topic, stone art.
His web site home page is:
Day's Knob (Ohio) - Alan Day
Alan writes on the subject of pigmentation at the Day's Knob  site:  "The above piece was taken to the laboratories of NSL Analytical Services in Cleveland, Ohio for compositional analysis by x-ray fluorescence spectroscopy.  It was determined that the dark material is a superficial layer of red ochre (iron-oxide-based pigment) quite distinct from the limestone.  The table below shows the elemental compositions of the lime- stone and the pigmentation: 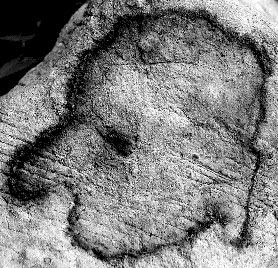 "A painting on limestone, a more or less anthropomorphic figure.  Note the typical artificial incisions on the rock." 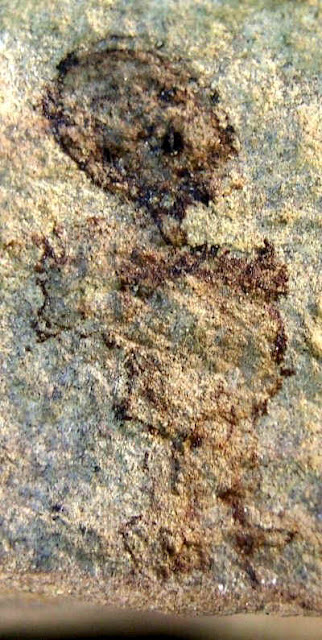 "An anthropomorphic painting (height 18 mm - 0.7") apparently in iron oxide on the edge of a sandstone rock .  Until recently, markings like these at this site have not been presented as paintings because of the insistence of some archaeologists that they must be the result of natural dripping onto a rock's horizontal surface.  This recently discovered figure, quite aside from its compelling appearance of artific- iality, is strong evidence to the contrary (confirmed by a professional geologist) since the image is on the vertical broken edge of the rock, perpendicular to its horizontal strata." 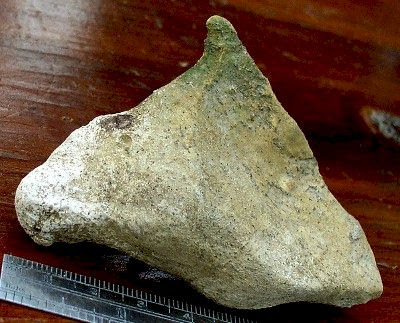 "The eye on this limestone horse-like carving was painted with the same material."

Please find more artifacts and more of the work of Alan Day, whose detection, description and presentation of archaeological anomalies must be given serious consideration and evaluation by archaeological science.

A special thanks to Alan for use of his material and for kindly helping me understand my own anomalous artifacts and prehistoric art.
Posted by Ken Johnston at 11:31 AM