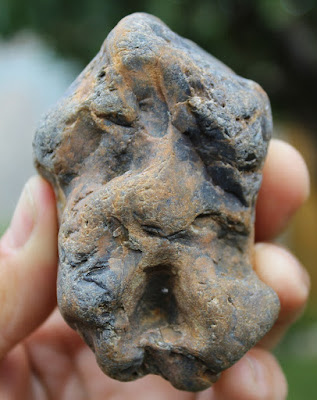 "Hello, This human illustration shows a man screaming or a dead man (mouth open). If you turn the piece an animal head is observed. Dimensions : 7 / 5.5 / 4 cm. Piece collected on the island of Oléron on a Lower Paleolithic site. Cordially, Henri" 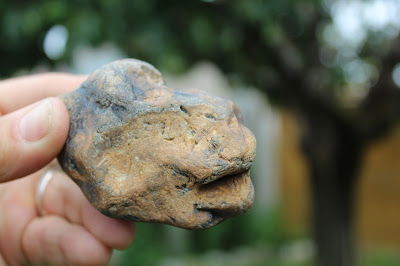 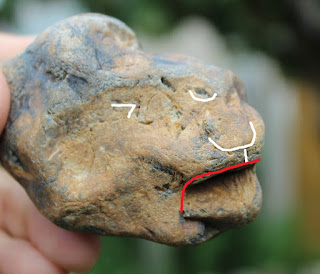 Ken Johnston illustration of the animal head. The right eye is distinctly incised as two lines which terminate at their meeting point. I think this is a depiction of a feline head with an 'open mouth.' 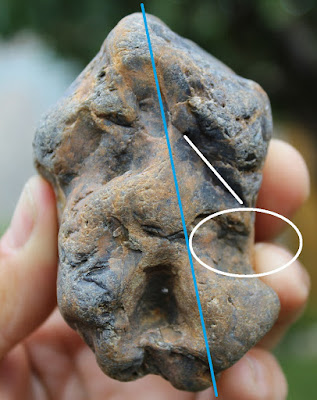 Ken Johnston illustration of a general distortion to the left side of the sculpted face mask on this figure stone which is affected by the harsh "gash" treatment of the left eye and a "gash" removal of part of the face under the eye (in the circle above). This kind of face mask with 'missing left eye' and distortion to the left side of the face in seen in many examples by finders in Europe and North America on this blog.

Because of a compound sculpture (lion head and human head pieces which 'interlock') I found together on my property on a former glacial terminus swamp at Buckeye Lake, Ohio and other examples like this one, I think the feline icons are related to the distorted face by implying a 'lion bite to the head' in a moment of horror. 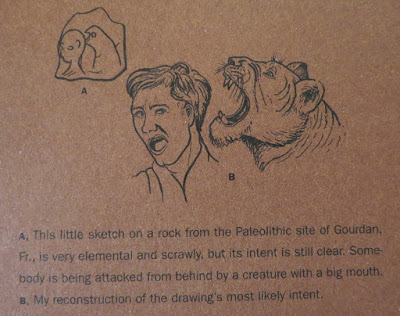 Paleolithic art author Guthrie illustrates an engraving from a rock at the site at Gourdan, France, which is a variation of the "lion bite to the head" memes found at Isle de Oleron by Mr. Valentie here and seen in the Ohio example of the ball-in-socket interlocking human and lion heads which stand upright together. Image from page 175, The Nature of Paleolithic Art, R. Dale Guthrie.
Posted by Ken Johnston at 10:17 AM