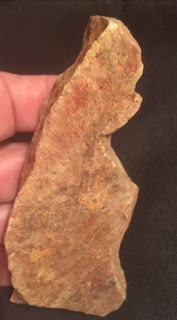 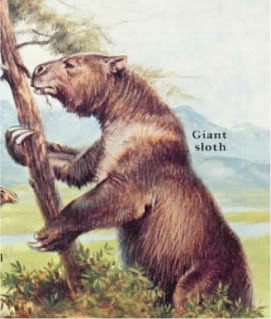 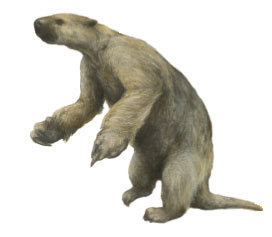 Initially suggestive of a standing bear, I recognize this zoomorphic stone as "slothy" and then consider the tail-like projection on the sculpture as a likely depiction of this animal's very substantial tail which it used for balance and support while stripping trees of foliage. A couple of other sloth sculptures have been featured on this blog. The sitting/standing upright posture is more normal for a sloth than a bear.

In the context of the scores of sculptures from the Old Route 66 Zoo Site near Joplin, Missouri, some depicting Ice Age animals, this stone may be reasonably interpreted as a manufactured or recognized giant ground sloth representation.

Dr. Brian Redmond, curator of archaeology at The Cleveland Museum of Natural History, was lead author on research published in the Feb. 22, 2012 online issue of the journal World Archaeology. Redmond and researchers analyzed 10 animal bones found in 1998 in the collections of the Firelands Historical Society Museum in Norwalk, Ohio. The bones were from a Jefferson's Ground Sloth. This large plant-eating animal became extinct at the end of the Ice Age around 10,000 years ago. Here, Redmond discusses the research.
Posted by Ken Johnston at 9:55 AM