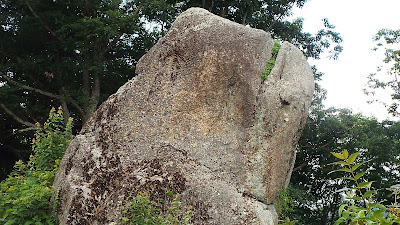 Anonymous sent this photo of a rock outcrop in Virginia which may have been modified to further resemble a mammoth profile facing right. The mammoth's eye and the lines in the rock defining the trunk look to be areas which could be checked for human agency and inspected for dating by rock art experts. 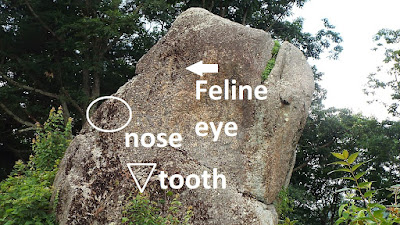 My own interpretation of this sculpted outcrop detects a faint feline face profile looking left on the posterior of the mammoth with remnants of an oval shaped eye and a two-nostril nose. The shape of the cat's head and a possible triangle-shaped fang tooth suggests it may represent a scimitar cat. This could be a recognition of the predator-prey relationship of these two animals. 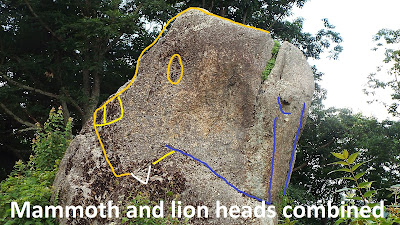 At its peak the rock is about 20 feet (6m) off the ground. The Shenandoah and Appalachian Mountain ranges present endless opportunities for early American peoples to seek shelter and to reflect their lives in the permanence of the stone outcrop material around them.

With a strong bias in favor of petroglyphs over sculpture, archaeology seems to have completely missed rock art in the American southeast which was made by exploiting natural stone features like is done in portable rock art. This sculptural landscape rock art is also covered by this blog because it further develops the context for the portable materials and is related to it with differences only in scale. 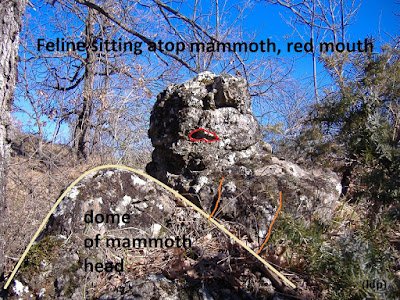 Landscape sculpture find by Luigi Chiapparoli at Piacenza, Italy, interpreted here as a depiction of feline sitting atop a mammoth with the dome of the mammoth's head. 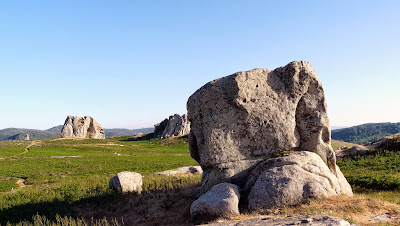 This rock outcrop on Sicily, Italy, is among others there which have iconic properties. A human form has been recognized in the right side of this rock. Maybe it should also be considered as a candidate for a rock art depiction of a mammoth or similar creature. 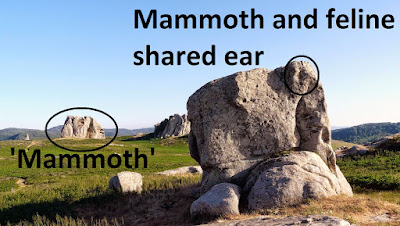 This one may also be considered a mammoth combination with a feline form where the cat shares the ear with the mammoth and is facing us with outstretched paws like a sphinx. The cat's head is turned and it is looking at the lower left of the frame, perhaps looking at the 'mammoth' moving across the landscape.
Posted by Ken Johnston at 10:24 AM