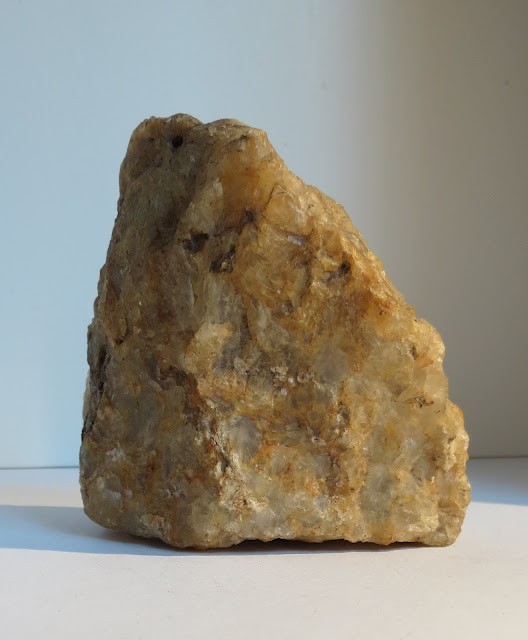 The mammoth is often represented in this form, depicting its imposing height and the "domed head" as prominent defining features. The sculpture stands upright on a perfectly flat base. It was found in the context of cobble and pebble tools from a trench at a depth of about two feet. It was found about 100 feet from the "Buckeye Lake paleolithic flint sculpture hoard" of 7 sculptures found in immediate proximity in another trench on my 1/2 acre property.

Quartz is an exotic lithic material to the mostly drab native Ohio bedrock of limestones and sandstones. It is imported as glacial till to central Ohio in the Illinoian and Wisconsinin ages, with terminal moraines and outwash flows from both episodes being found within a few miles of each other in this locale. The Appalacial Plateau slowed or stopped the glaciers in this area. Much of this exotic material can probably be traced to the mountains of Canada to the north. 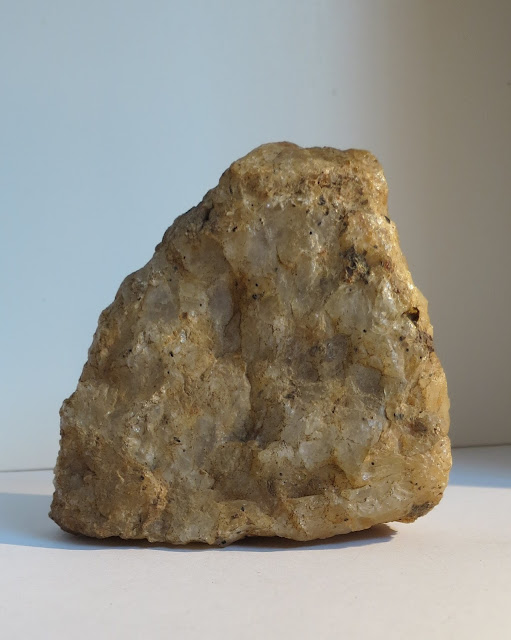 Side 2 depicts a 2nd mammoth form in profile, facing right 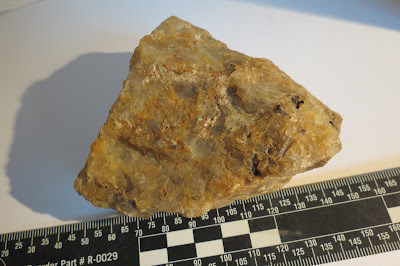 Artifact shown with scale. The flat edge at left is the base of the sculpture which presents it in correct viewing orientation 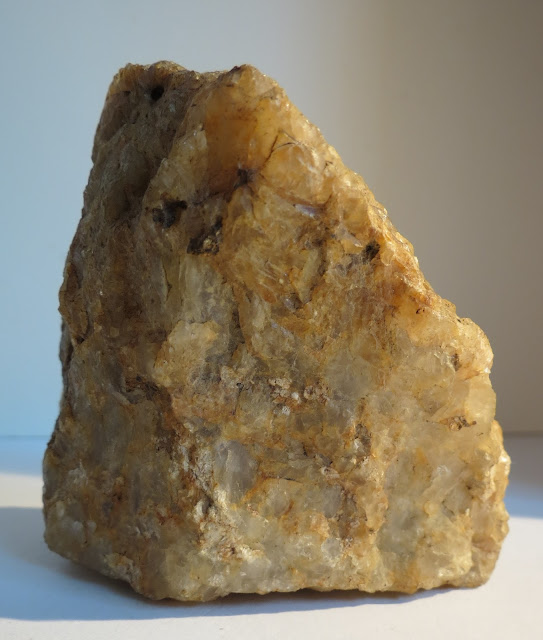 In addition to the overall stone shape as a whole representing a mammoth on the figure's two sides, there is a third, smaller, mammoth figure facing left here and a human face profile facing right nested in the sculptural image.

The the mammoth form with a human depiction at its posterior is a North American palaeoart motif established on this blog and first documented by Ursel Benekendorff from the Lower Paleolithic site of Gross Pampau, Germany, dated approx. 475,000 years before present. Like the Acheulean handaxe and other tool traditions, this art tradition has persisted for many tens of thousands of years. 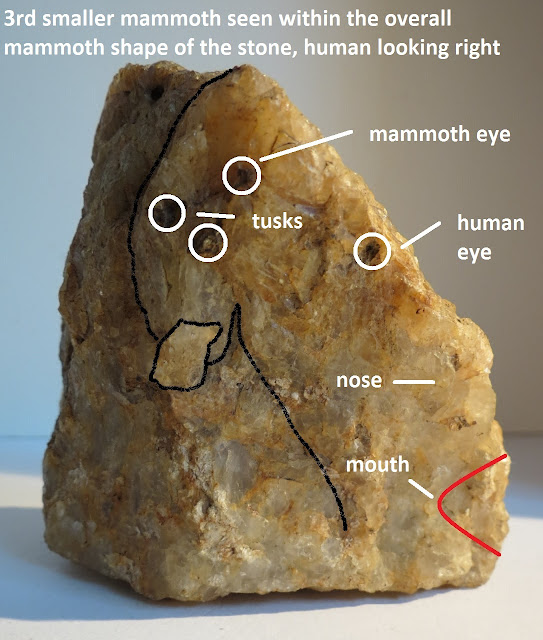 My markup of the photo illustrating my interpretations. Chris Smith find, San Sabo County, Texas, also depicts a human face on the back of a mammoth sculpture, as do several others featured on this blog. 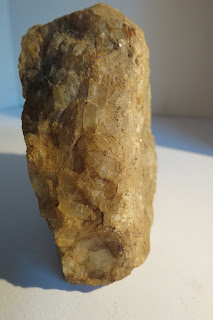 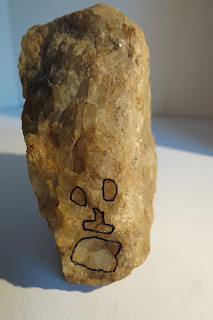 On the lower back side of the sculpture, is a worked human face figure on what is the posterior of the mammoth. The normal natural fractal pattern of the quartz crystals has been disturbed to create the facial elements and is evident under 10x lighted magnification.

Artifacts like this are confirmable by qualified archaeological and petrological scientists but no one in an official capacity sees a reason to do so. This ignores a large portion of the available stone traces of our human past and distorts it significantly. Art is much more likely to inform us of the lives of our ancestors than "tool sets," which have been falsely defined as "cultures" by orthodox archaeologists. 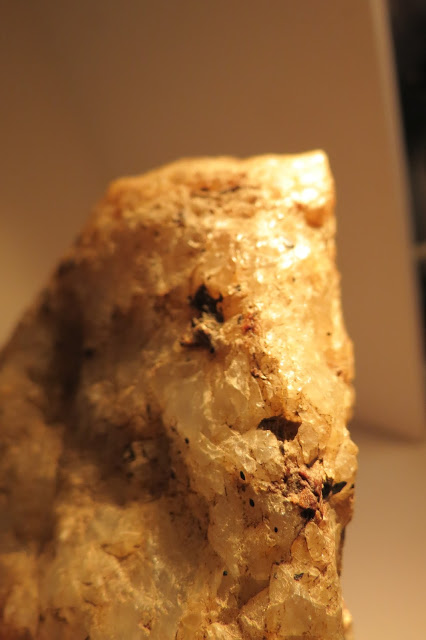 The mammoth's eye from the right profile view of the whole stone (as in 2nd photo from top) is also the shiney right eye of a one-eyed feline head depicted on the front of the sculpture. Perhaps this stone lion is depicted atop its prey, much like real large cats will sit on top of their prey feasting until sunrise. 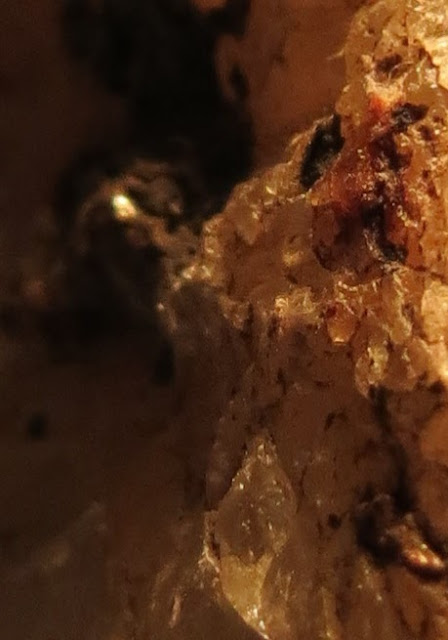 Close up of mammoth and lion eye shared element. It becomes light reflective only from a single perspective when rotating the stone. This is a close up view of the eye at the moment it catches the light. 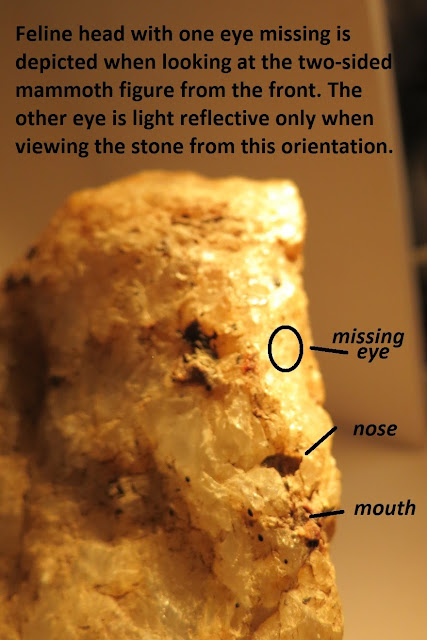 The one-eyed lion is a motif in Paleolithic portable rock art also found on a flint sculpture 10 miles from the Buckeye Lake quartz example, as well as a ceramic art piece from the European Dolni Vestonice archaeological site. It has also been identified on a figure found by Luigi Ciapparroli in northern Italy.