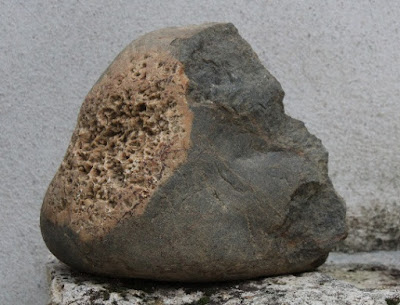 The right edge in this view has several flake removals to affect the appearance of a human face profile. From a Lower Paleolithic site in the French Pyrenees producing art and tools.

Henri Valentie writes "I found this on the same site as the piece already published in the blog November 7, 2014. I find a resemblance with 2 heads. The first photo shows part which is dotted. Perhaps have they attempted to create a hairstyle? The stone is 23/20/15 cm." 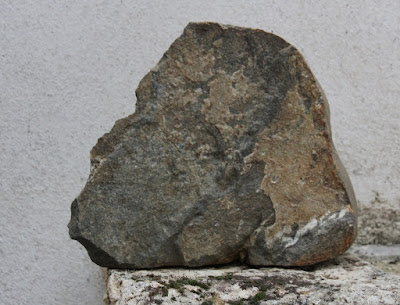 When the sculpture is rotated the opposite side expresses the Paleolithic art motif 'human head two-faced' described by Pietro Gaietto. The two faces are in profile looking right and left.

The face looking right is composed entirely of a bird figure with a bulging belly. The belly of the bird is in an egg form and also serves as the chin of the human. 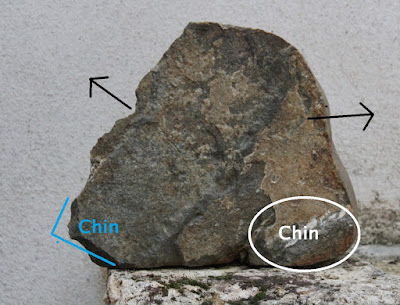 Arrows depict approximate lines of sight from the two face profiles. Illustration of a recessive, squared off chin at left and a rounded protruding chin on the face at right. Gaietto has written that the two faced sculptures may sometimes be depicting two kinds of people, more robust, archaic humans and more gracile anatomically modern humans (AMH) for example. I think that is the case in this example with the archaic human face at left and the more AMH face at right. 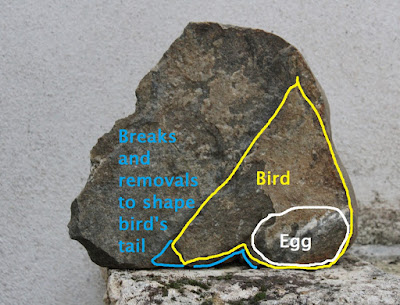 Ken Johnston interpretation of the bird and egg forms composing the face looking right. Two breaks have been made to make the bird's 'tail feathers' and two incised lines converge to form the point of the bird's 'beak.'

This sculpture is displaying the previously described motif of a 'human face with a symbolic egg-chin.' I have hypothesized that the rounded, protruding egg-like chin seen in anatomically modern humans but no other hominins has resulted from genetic influence from a long-running cultural imperative to selectively favor mates with chins resembling a "cosmic bird egg."

The human chin has long been an enigma to Physical Anthropology: Journal of Human Evolution, Jeffrey H. Schwartz and Ian Tattersall, The human chin revisited: what is it and who has it? (1999)

Paper: Facial prognathism in the hominid and human species
Posted by Ken Johnston at 8:35 AM