A mammoth sculpture emerges from the snow at Site #44FK731, may illustrate a proto-Polyphemus tale 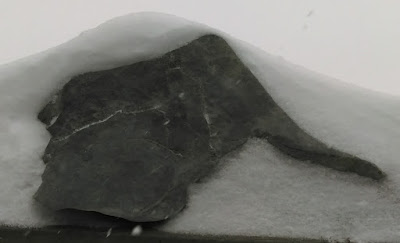 The Pleistocene Arkfeld site has produced more mammoth art objects than any other site in the world and several in this same motif. This is an example of a mammoth and human combination sculpture with a person's face profile on the back side of the mammoth figure. The artifact is not in situ in this photo but is surrounded by snow from today's East Coast blizzard.

A number of portable rock art mammoth sculptures which include human imagery have been identified by North American amateur archaeologists and described on this blog. A prominent motif is one of a mammoth with a human face profile incorporated onto its posterior.

Julien d’Huy has suggested there is evidence for a Paleolithic origin for a proto-Polyphemus tale (international tale type ATU 1137). He thinks it likely made it from the Old World into the Americas when the Bearing Land Bridge was open, prior to 10,500 years ago. There is also evidence for versions of it persisting in Amerindian Algonquin and Ojibwa cultures.

According to d’Huy, North American versions are compatible with some European cave art depictions:


“The peculiar image of the animal with a human thigh and prominent rear orifice is equally obscure, but can be compared to the Amerindian versions of the Polyphemus tale, in which the hero often hides inside an animal itself by entering through its anus. This enables the hero to escape the monster who controls the beasts from his dwelling. A motif of the hero hiding in this way would account for the prominence of the anus / vulva on the depicted animal and the co-occurrence of this with the peculiar feature of a human thigh on the animal.”

I think it is possible these sculptures are illustrating the human’s escape from the Lord of Animals in this tale by hiding in/at the mammoth’s anus.