Mini-tablet with incised lines forming a grid pattern along with a fan motif from the Arkfeld site, #44FK731, Clear Brook, Virginia 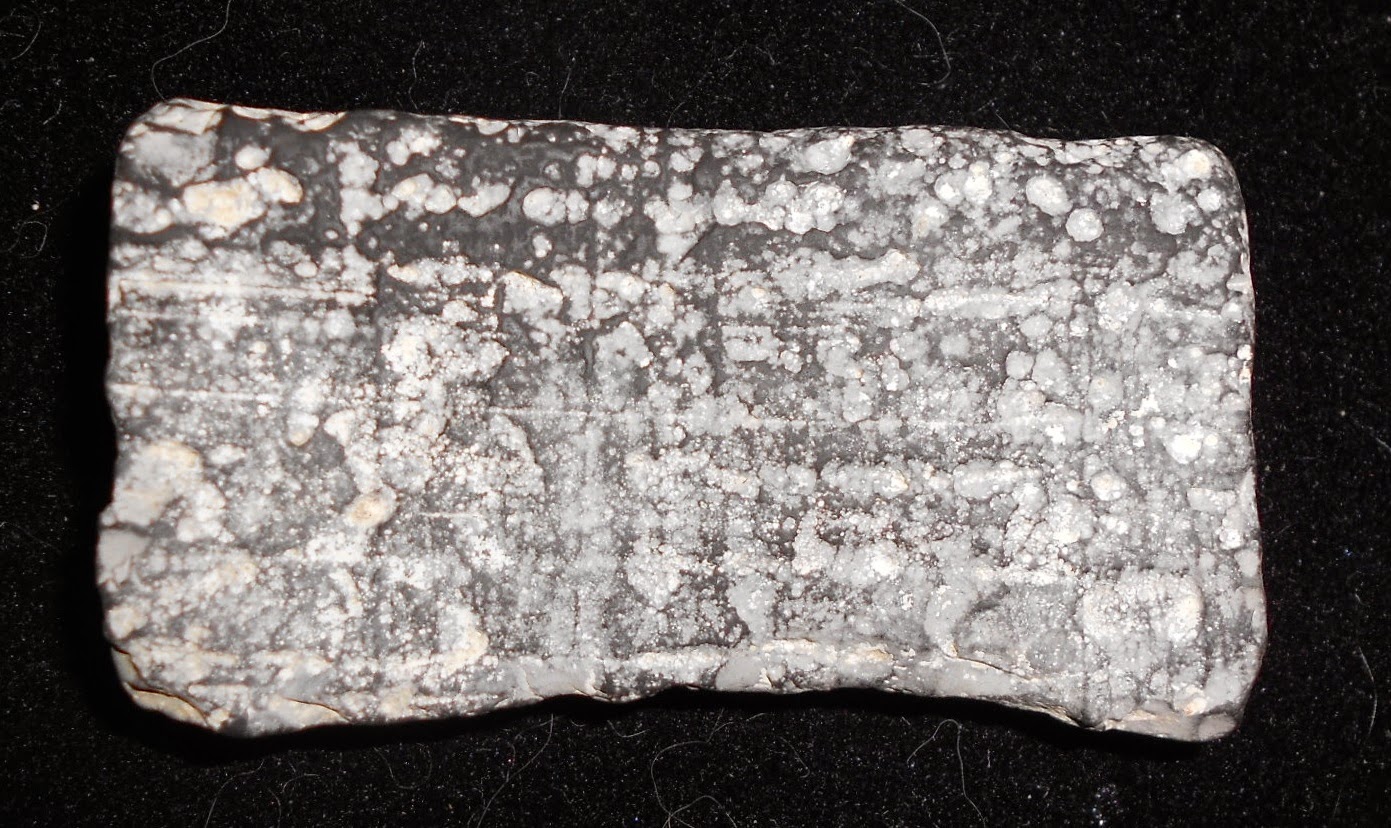 Arkfeld site, Clear Brook, Virginia, site #44FK731
Mini-tablet with incised lines made by use of a straight edge which form a grid pattern, 7cm. Found in context with other portable rock art incised grids by Adam Arkfeld. 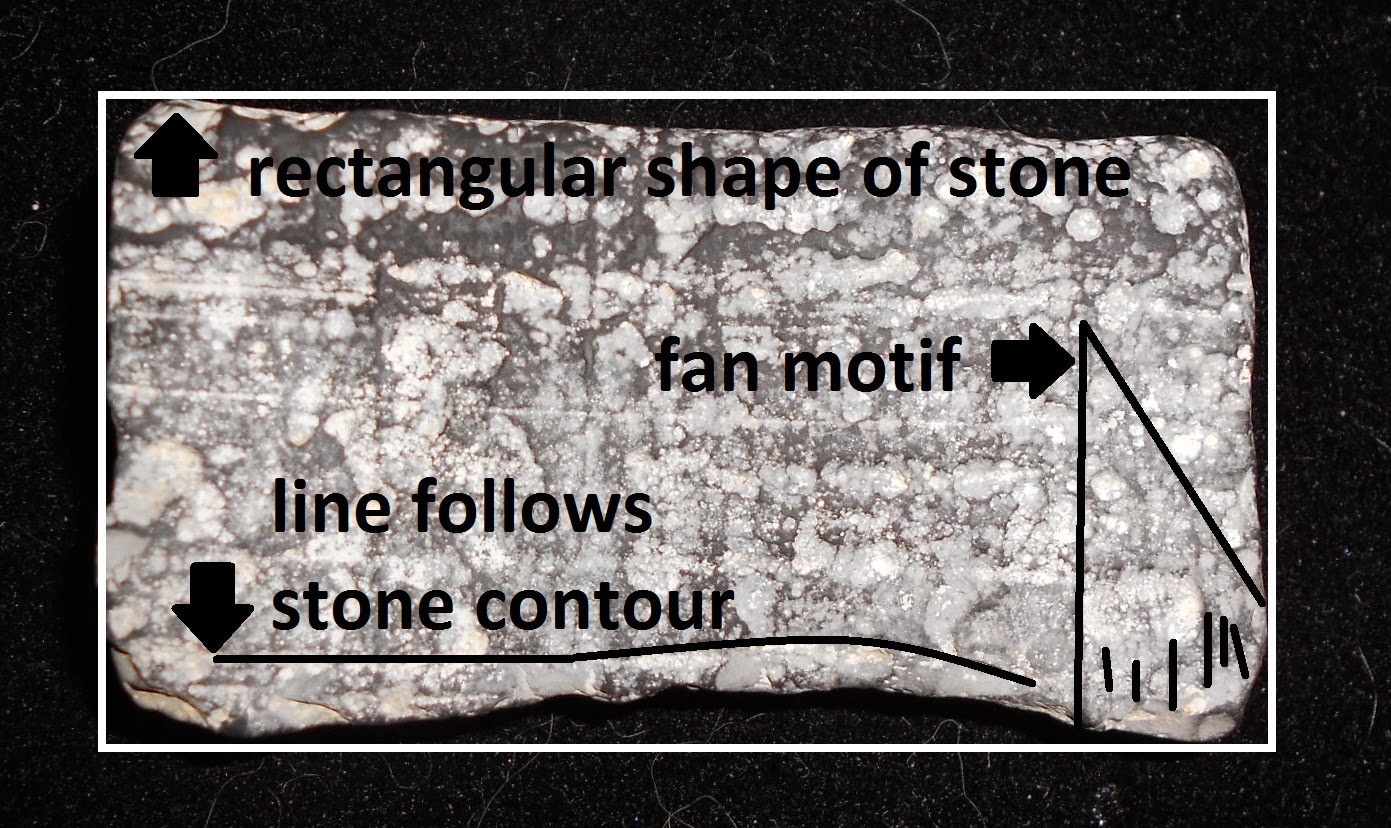 In addition to the incised grid pattern the rectangular shape of the stone is noteworthy. There also appears to be a fan motif of generally radial lines. A line starts as straight but then curves along with the contour of the edge of the stone indicating a likely human judgment.

Close up of the fan motif which is still detectable on the stone. 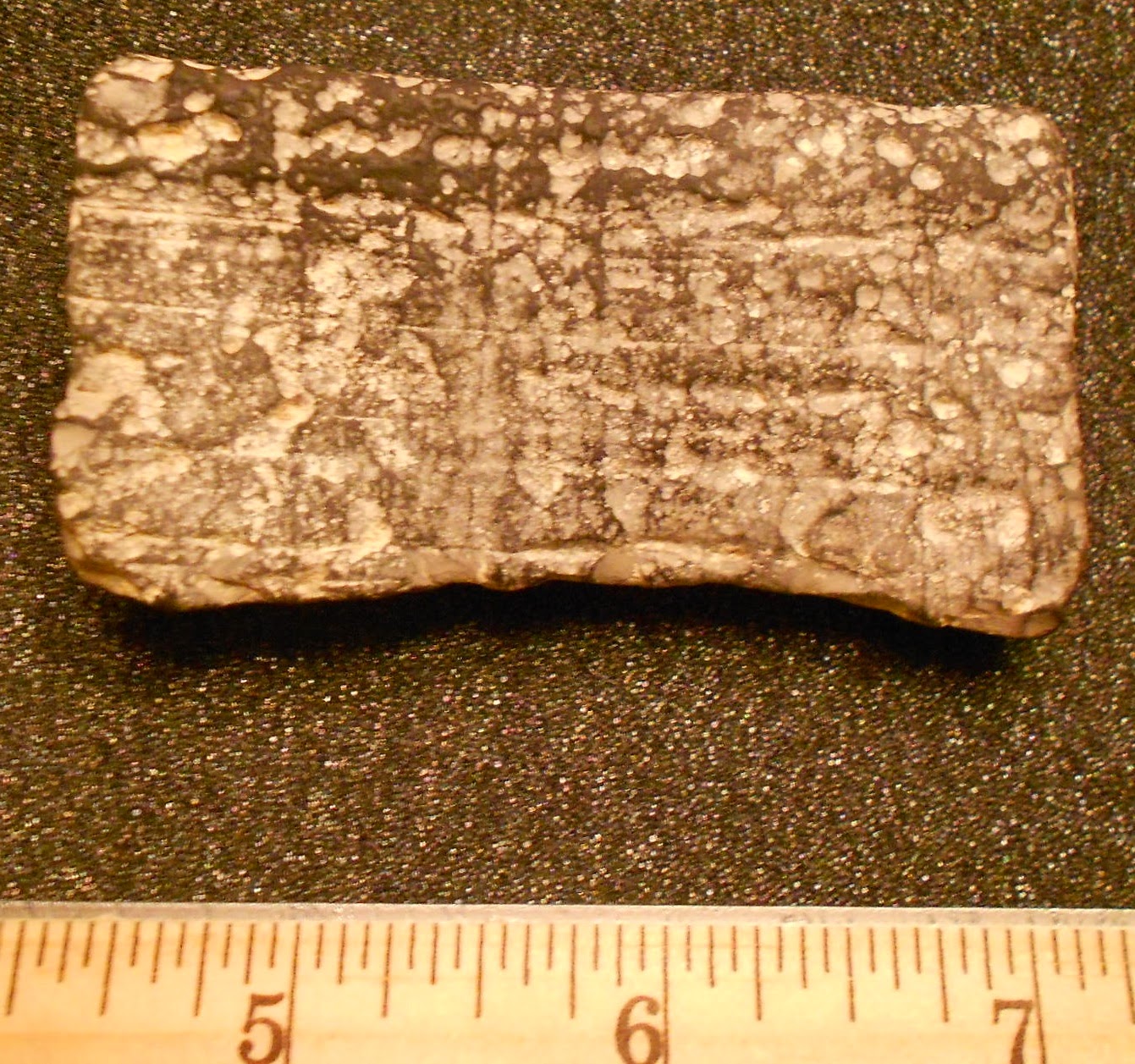 Regarding his analysis of engraved stones in the Acheulean, John Feliks writes in his paper THE GRAPHICS OF BILZINGSLEBEN: SOPHISTICATION AND SUBTLETY IN THE MIND OF HOMO ERECTUS

"The groundwork for straight edge theory was laid out in a prior publication (Feliks 2006). The visual data offered in the original paper and this new paper is straightforward, confirmable by direct observation, and testable on the page by anyone. It clearly indicates that the engravers of the Bilzingsleben artifacts used a straight edge to facilitate creation of the many subtle radial patterns and parallels featuring perfectly straight lines. The proposal is demonstrated in this paper by direct comparison of the Bilzingsleben engraved motifs with modern standard-increment rulers, the proposed Bilzingsleben rib-bone “ratio ruler,” and by superimpositions of duplicated radial motifs.

The idea that Homo erectus could have used a straight edge had never been considered in science for one simple reason: the necessity of retaining in the evolutionary paradigm an assumed ‘cognitive half-way-there zone’ between early ape-like creatures such as Ardipithecus and modern Homo sapiens. Accepting this assumption as a central axiom, the scientific community in general has long been pre-convinced that Homo erectus was unable even to speak let alone create engravings of a quality level suggesting the work of modern draftspersons or technical designers. Prior to publication of Mania and Mania’s 1988 paper, Deliberate engravings on bone artifacts of Homo erectus, it was considered by most in archaeology that markings on Lower and Middle Palaeolithic bone artifacts were likely a by-product of nothing more intentional than scraping the bones for meat. Not surprisingly, and due to universal acceptance of the paradigm, publication of the images did not result in an immediate reversal of opinion, either. In fact, so ingrained has the “ape-man” perspective of Homo erectus been that the idea has budged very little even two decades after Mania and Mania published the engravings. The most profound effect seems to be that of a debated name change for the Bilzingsleben hominids from Homo erectus to Homo heidelbergensis. H. heidelbergensis serves as a mere buffer-zone species between H. erectus and H. sapiens and is regarded arbitrary by some researchers. Still, even if the name heidelbergensis were adopted, the switch would be a moot choice of association as the straight edge studies point to a level of technology not even attributed to Homo sapiens until 350,000 years later.

Significance of Straight edge theory: Employing a straight edge to make either single straight lines or radial motifs is unmistakably clear evidence not only for language but for highly-evolved language and mathematical abilities. The link is the concept of analogy at two levels. At the basic level, the straight edge in and of itself is a profoundly simple analogical invention easily associated with language because a line engraved with the aid of a straight edge is directly symbolic of the straight edge itself, being a “representation” of the edge. This clearly indicates that Homo erectus understood the association between a physical object and a graphic representation of a particular quality of that object, i.e. its straightness. It is analogous in language to a spoken word or graphic symbol being used to represent an object, a person, or an idea.

On a more complex and genuinely unlimited level both philosophically and mathematically, a central thesis of this paper is that multiple straight edge-engraved lines forming “radial motifs” is a confirmation that the people of Bilzingsleben fully understood the concept of analogy or that one idea can be compared with another. Any analogy based on radial symmetry can be instantly applied to philosophical or mathematical ideas; e.g., Fig. 7.4a & b, “The Realm of Ideas,” where one portion of a radial motif can be readily compared with another portion because angles remain the same at any magnification or distance; Fig. 7.9, “Fractal Angle Symmetry,” where duplicated angles may branch off of base angles; and Figs. 7.11–7.14, where small motifs can be used to imply association with larger or even infinite motifs.

Regardless of how unlikely these claims may seem under the old paradigm view of Homo erectus, use of a straight edge to create radial motifs demonstrates that Homo erectus people not only fully understood what they were doing but were also fully determined and committed to the process of engraving similar motifs at a very high level of quality. The focus is on analogy because attainment of analogy was crucial in the development of modern human cognition as it is the means by which any knowledge may be applied to any other knowledge. This development was not a biological or evolutionary effect brought about by simple expansion or reconfiguration of the physical brain as is commonly taught in anthropology but was the result of what is better described as a “discovery” or “cognitive realization.” (These ideas are not the least bit esoteric because discovery and realization are two ways the brain functions in all creatures that possess a brain.)." (Feliks, page 74-78). 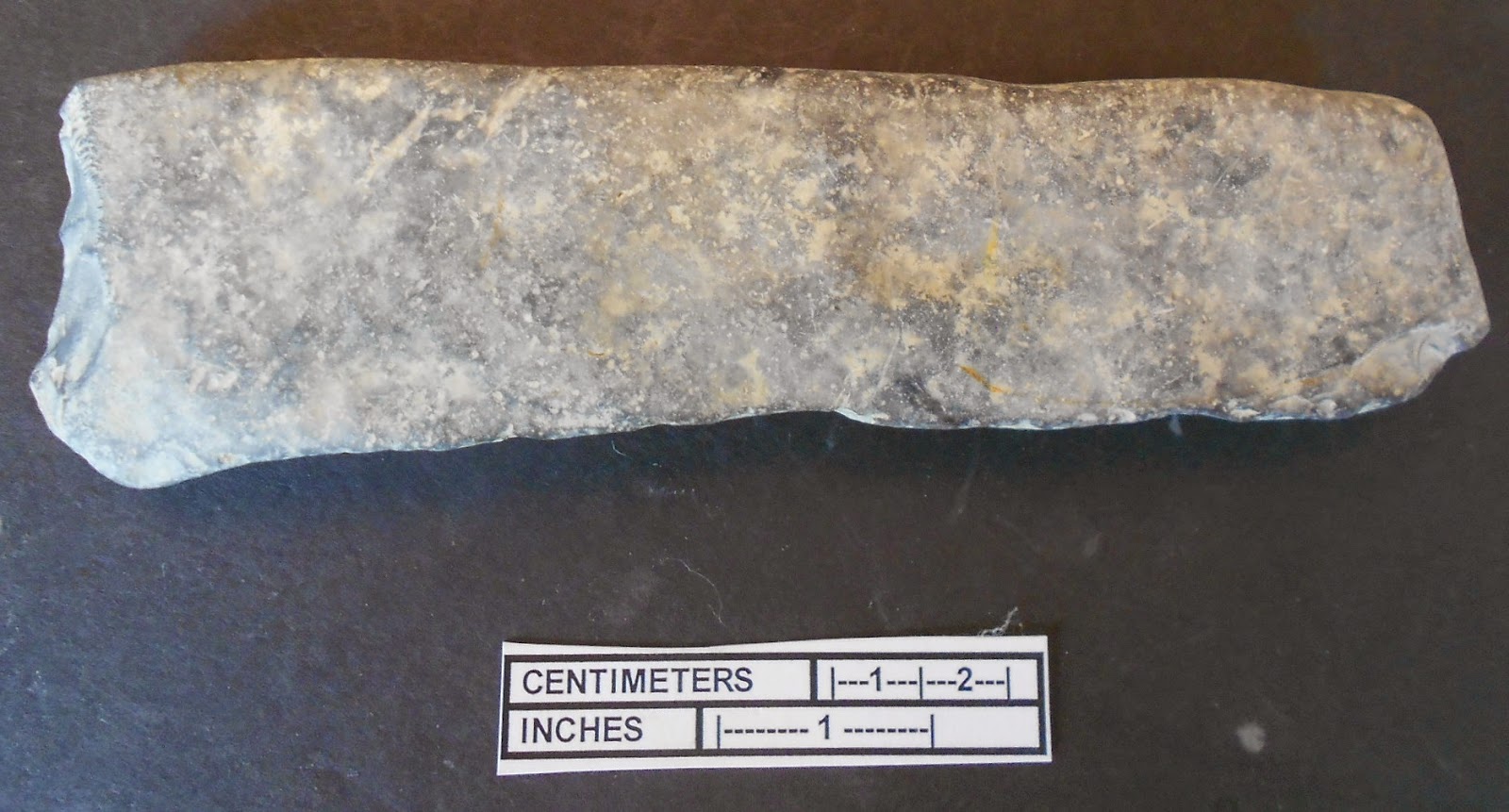 A wedge or axe identified by Adam Arkfeld with a flaked bit at the tip at left.
Posted by Ken Johnston at 11:12 AM