In light of Paleoamerican "back migration" hypothesis, one-eyed lion head figures could have originated in North America 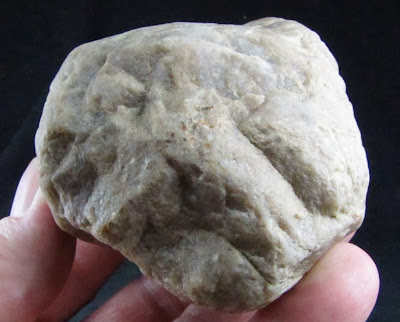 One-eyed lion head, found in context of dozens of feline figures from the Mahoning River valley, Canfield, Ohio. Find and interpretation by Allen Deibel, part of his "Stone cat collection." Canfield is just 54 miles from the famous Meadowcroft Rock Shelter, with human presence dated to 19,000 to 16,000 years ago. 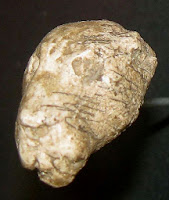 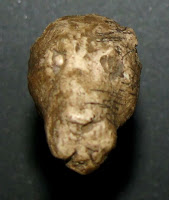 This ceramic lion head from Dolní Věstonice, Czech Republic, was interpreted by Ken Johnston as depicted with a missing left eye. The right eye on the figure is a circle with the eye element in slight relief, the left eye is depicted as an empty space.

With the possibility of "back migrations" from North America to Eurasia, we do not know where motifs common to both continents originated, or if they originated together when the Beringia land bridge was open. Beringia has been open to migration of animals and people for 200,000 of the last 500,000 years. 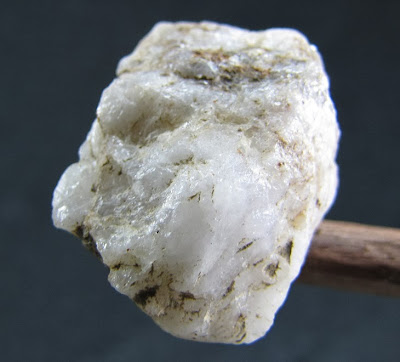 Quartzite figure of human head in left profile found by Allen Deibel, Canfield, Ohio, was featured in an earlier posting on this blog. This head has a "Neanderthal-like" appearance with no chin.

AUTHOR NOTE ON FIELD FINDS: Amateur archaeologists and artifact hunters like Allen Deibel and myself cannot go just anywhere and find "rocks that look like things (mimetoliths)." Having been presented with many opportunities to search stone, cobble and pebble rock material which was not likely associated with any prior human context yields zero suspected portable rock art finds. If a reader is of the mind that these are just rocks that people could find anywhere, anytime, with just a little imagination, I challenge you to go find one, better one that looks like it might have been worked, better two similar iconic stones which have been worked, then two in immediate proximity, then a third from a nearby site. The chances of these objects being a function of natural chaos dissipates when reason, common sense and statistical analysis are applied to the archaeological interpretations. The key is the ability to access the old soils which contain the lithic remains of the peoples who practiced these art traditions. Remember conversely, the art may used to identify the places which could contain other evidence of early human activity, including tool forms which have not been recognized to date.
Posted by Ken Johnston at 10:22 AM