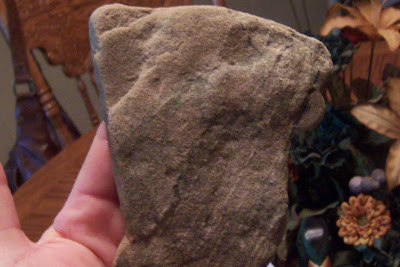 Sherry Hill, an amateur archaeologist in Ritterstown, Tennessee, reports finding several anthropomorphic and zoomorphic stones in a relatively small area, which she cannot attribute to coincidence.  They are found near the Doe River, in Carter County.  This is with scale. 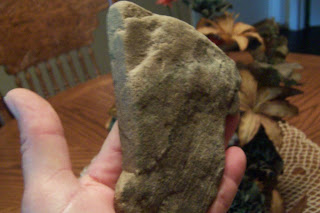 Artifact viewed from an angle as if from "behind the cat"

Finding multiple pieces like this in close proximity, as Sherry has done, lends support to 'artistic intent' in the "human agency vs. nature-fact" question.  More of Sherry's finds to be featured in the future.  Thanks, Sherry!
Posted by Ken Johnston at 5:14 PM