More icons, further interpretation made, of Peter Cottontail Has Left the Building 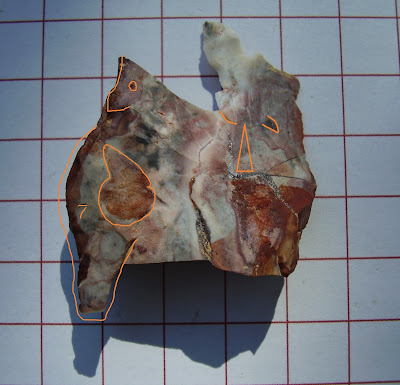 After the first posting of this artifact a few days ago, a bird icon was detected at the crest of the rabbit's back.  Thanks to visitor Lyn Niday of Marion, Ohio, for reporting the bird she saw.  The bird has a beak and an eye and shares its crested head with the rabbit's pointed back.  It could be taken as a "cardinal" because of the crested head and red color.  The "bird overseer" motif is also seen in the posting "Giant Cosmic Egg."  It is not marked up in the posting but may be seen on top of the man's head/woman's head.  It is strikingly similar to the one here, being separated by 2000 miles and an unknown period of time.  One must look carefully to see the bird.
A proboscidean representation is seen on the rabbit's hind quarter, the rabbit leg is also the trunk of the mammoth or mastodon.  An elephant eye is also worked into the flint and is marked up on the photo above.

On the right side of the artifact is yet another rabbit, looking straight on at the viewer.  The sparkling silver, lightning bolt-like, inclusion in the stone appears to have been integrated a "blade of grass" the rabbit is munching on.  The orange triangle is what would be the nose area of this rabbit face eating grass. 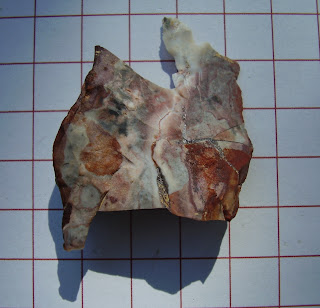 The red rabbit head profile inclusion of the grey background stone material is also highlighted in the top photo.  The entire piece seems centered around this iconic inclusion.  It is likely what inspired the artist to work the flint to further represent a rabbit.  This rabbit head in profile also serves as the ear of the elephant.  Click this photo to expand size.  Photos taken on a CM grid. 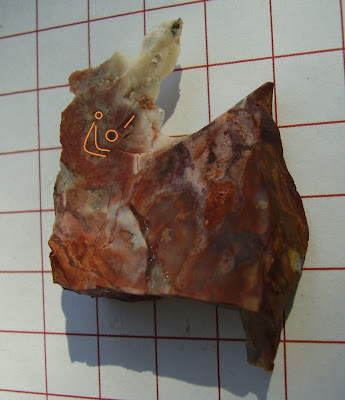 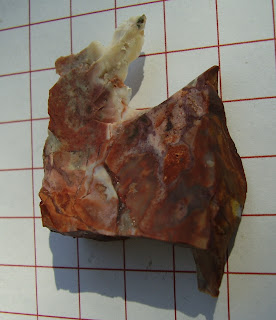 For those who could not see the smiling rabbit's face in the original post, I have made the markup above to compare to the original unmarked photo as seen at left.  Click photo to expand. 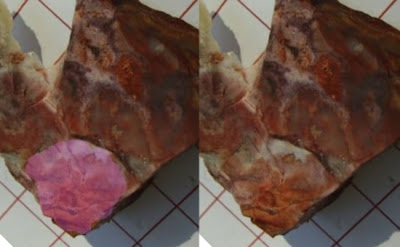 Dennis Boggs of Oregon detected this face on the artifact as he highlighted in the photo here.  Thanks for reporting this Dennis and for rotating the photo and marking it up so a nice comparison may be made.

Rabbits, birds and elephants are thought to be major maternal and fertility icons in Paleolithic art.