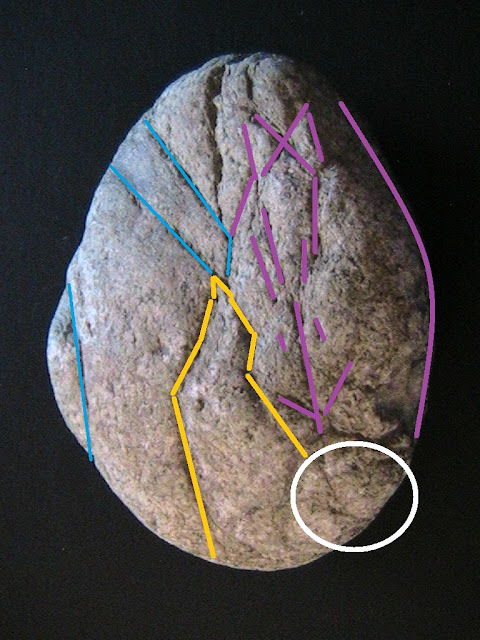 Allen Deibel of Canfied, Ohio, archaeologist and naturalist, has "The stone cat collection,"  a large number of mostly quartz feline themed figure stones from the Mahoning River Valley in north east Ohio.  Al informed me of a cat visage on the right side of this stone "from about one to seven O'clock."  I had noticed a cat and a bird figure but Al's cat did not square up with mine.

I interpreted the bird icon as being depicted as emerging from the egg shaped feature marked in white above.  If one incorporates the yellow bird, the white egg and the blue cat, it is a bulging cats mouth (the one Al reported to me) as if the cat has consumed the bird and the egg (which it did if one is able to visually combine the three colors into another cat face).  It looks like Sylvester with Tweetie Pie stuffed into his mouth, without the yellow feather sticking out.  The lines to the left, highlighted in blue, are interpreted to be a standing water bird mother feeding her chick, the two beaks making contact  to transfer food.

This art piece depicts the theme of the cycle of life/death, predator/prey, iconography on a composite golden ellipse. 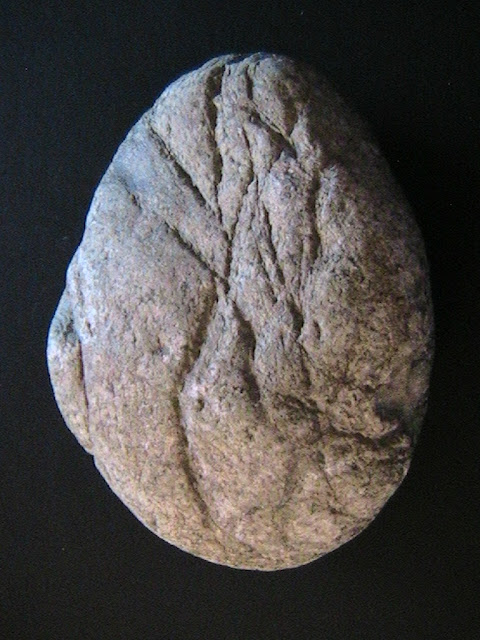 What is suspected to be residue of a manganese oxide based pigment, blueish, is seen on the left side of this artifact.  This is what leads to the interpretation of the standing water bird as a "blue heron."

From this link you go right to the original posting of this sculpture: