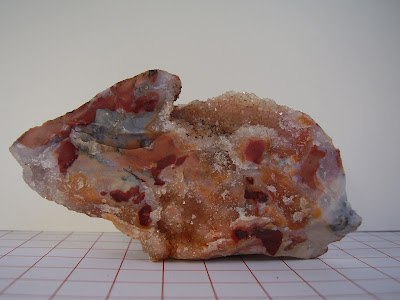 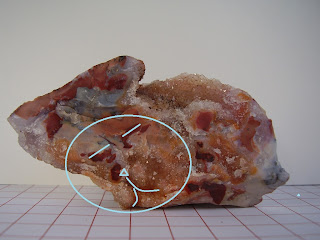 This photo is an aide to refer back to the above to see a feline visage as highlighted here in blue.  Relax your focus, "look through your eyelashes," or stand at a distance from the screen to best see the big cat. 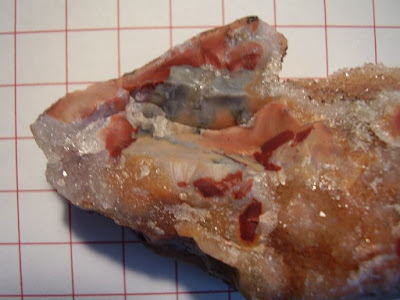 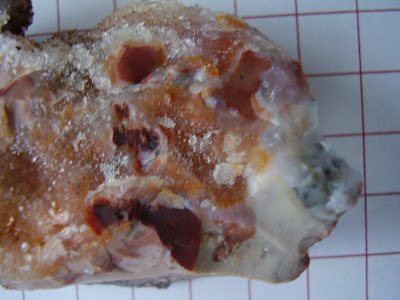 This is back half of the rabbit.  Back of the ear tip is seen in black material in upper left corner.  Two animal head images are seen here, taken to be a lion face and bear head in right profle.  Because they share common features in the stone, it may be difficult to percieve. 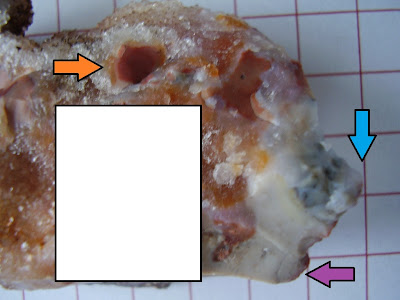 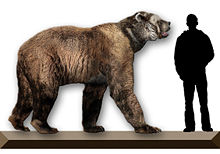 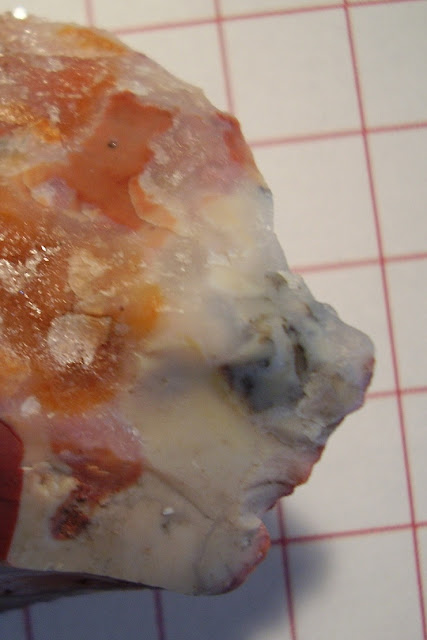 The tip of the bear's face may also depict the face of a man in right profile so this could be taken as a "synthesis of man's face with a bears head."  The man and bear share the same mouth. If one pays visual attention to the front of the faces like shown in this photo, the human depiction becomes more clear.  It looks like the face has a mournful frown. 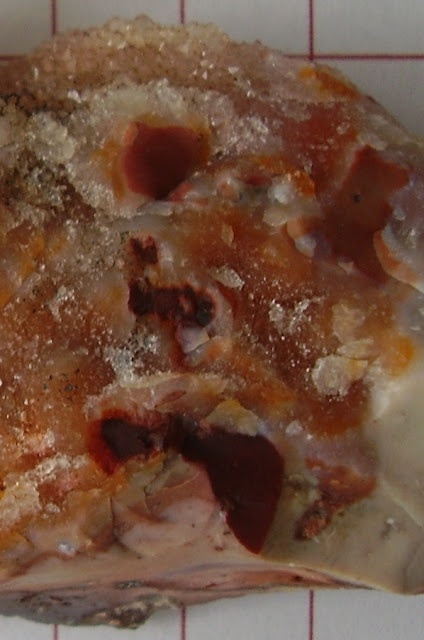 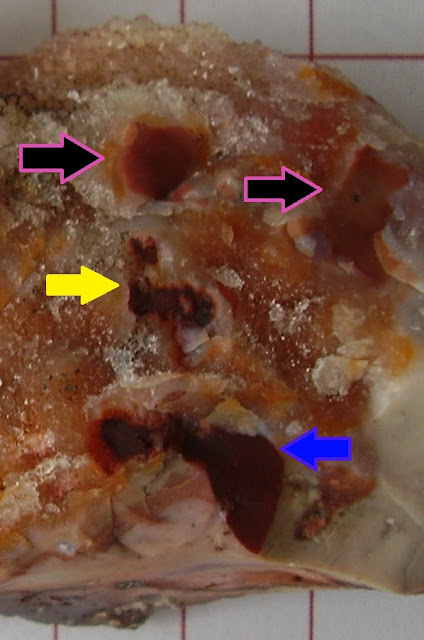 Pink and black are lion's eyes, yellow is the nose.  The nose also looks like a caprid (deer?) icon with its head turned as if looking behind it.  It appears there is a chunk or "bite" out of the hind quarter of the deer.  The deer is squarely in the eyes of the lion, being its nose.  Blue is the snarling mouth of the lion. 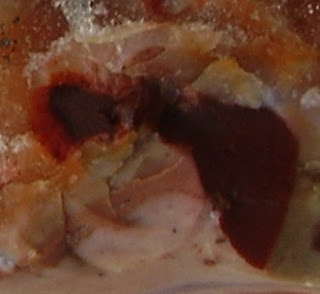 The maroon band of flint which is the face-on lion's snarling mouth, also seems to serve as red hairdo, or a turban style wrap, atop a grinning woman's face.  There appears to be an ear decoration on the woman, like an earring.  Maybe the woman is being consumed by the lion, the lion's red lips grasping her head to begin a meal? 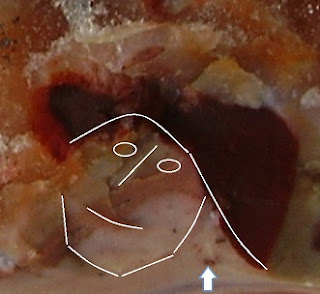 Arrow points to earring looking stone feature.  I hypothesize the frowning man's face (fourth photo above) is mourning the loss of his partner, shown here at the lion's mouth, to predation.  Based on the paleo-anthropological record of skeletal remains, it is estimated 6% to 10% of early humans died at the jaws, paws and claws of carnivores.  So, humans were more in the food chain than solely at the top of the food chain in pre-modern times.

In final, the interpretations of images here are of two lion faces, a bear head, a man's face, a woman's face, one deer and one two-sided rabbit.  A third lion image, with paw extended toward the viewer and a tooth showing, has not been marked up in the photos.  Can you find it?

Photo looking down on artifact as it stands on its base.  Without recognition, art pieces like this are being overlooked, forsaken by archaeologists, passed off as debitage or other debris, suitable for the pile of "burden stones." 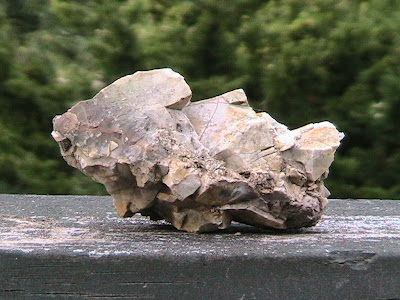 A similar looking sculpture with animals on two sides.  This side looks like the artifact featured in this post.  Also from Licking County, Ohio. 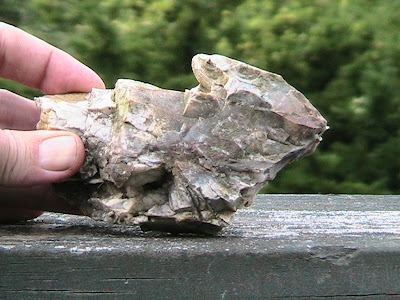 This side looks like a rabbit with a crystal inclusion perhaps representing the "magic womb" of the reproductive proclivity of this animal.  This is one of seven sculptures found in immediate proximity (a hoard) in Licking County Ohio and featured at the web site: http://subtleartifacts.com 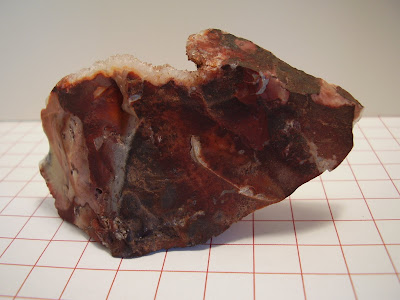 Side two of the featured figure stone (on CM grid) 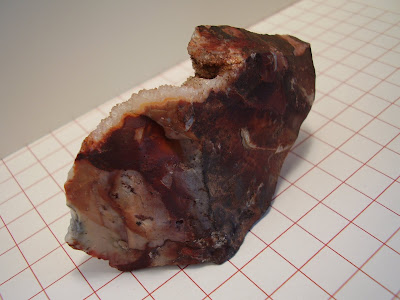 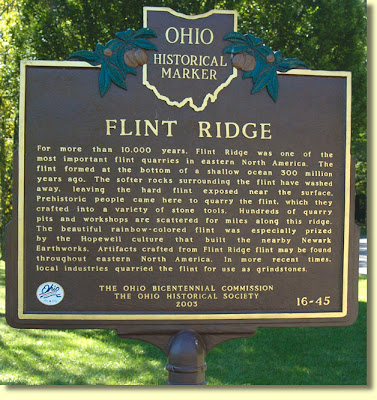 Flint Ridge is the source for the raw material in this post.
Click photo to expand size