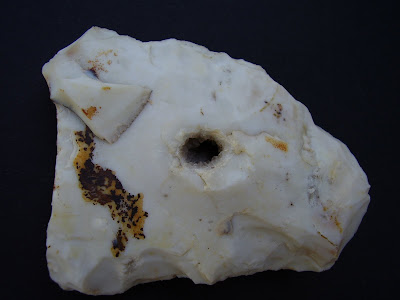 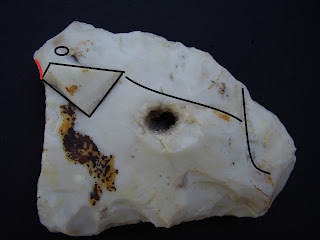 Also in above photo, a feline (presumably lion or scimitar) lieing on its stomach with head resting on left leg/paw (which also serves as the bison horn) may be seen in left profile with the lion's head in utmost upper left.  The bottom point of the buffalo horn triangle shape is the elbow of the lion's bent front left leg.  The lion's neck and back profile stretches along most of the top of the artifact as pictured here.  The feline's tail is fully expressed, hanging down from the cat to create the muzzle line of the buffalo. 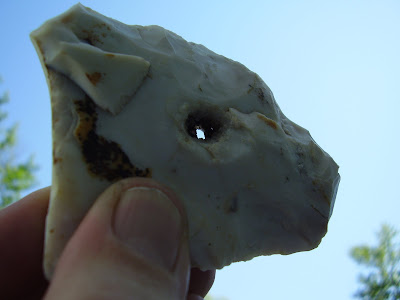 Eye penetrates the stone, allowing light to pass through crystals 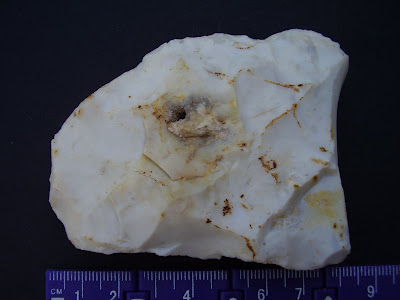 Pam was ridiculed for suggesting the white buffalo head iconography, knowing she had multiple other examples of people and animals, on a site sometimes known as arrowheadism.com.  A kind reader in another state suggested she contact me.  Ironically, via the internet, Pam lives 2 miles from my home in Hebron, Ohio, and sells me my favorite potato salad at the corner market!  Artifacts are Flint Ridge material, Licking County, Ohio, found at Jacksontown.

The feline in top/first photo is one of the repeated motif of "lion perched above, ready to pounce" which is seen in other artifacts as well. 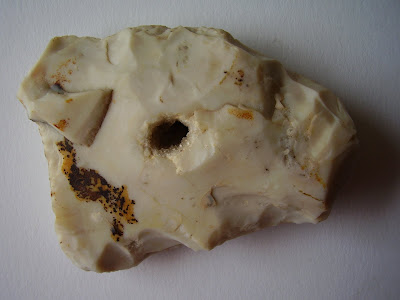 This piece may indicate a similar expression of an ideological value of a predator/prey depiction of "bison in the eye of the cat" as described by Allen V. Deibel in the above posting.  Both Allen's and Pam's artifacts are from east Ohio.