A combination of bird, egg and human imagery in a sculpture from The Old Route 66 Zoo 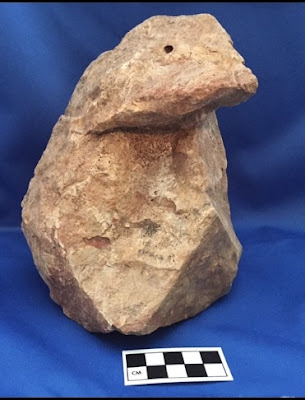 One of many bird form sculptures found at this Paleolithic portable rock art mega site. The bird has been given an eye perforation in the stone at the more or less correct artistic position. I also interpret cosmic egg imagery here where the bird is depicted as emerging beak first from the top of an egg, and where the egg depicts a human face on its side.

Bird head figures were described in the mid-19th century by the French amateur archaeologist Jacques Boucher de Perthes in Acheulean (Homo erectus) contexts. Boucher de Perthes himself said "The placement of the eye is a sure sign of intent." 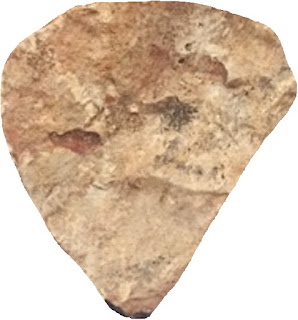 Interpreted faint remnants of a human face depiction on the egg/breast of the bird sculpture. The eyes are more clear but there are also traces of a nose and mouth. This is seen in several other examples on this blog. These images were certainly more visually clear at the time of their use.

The apparent working traces seem ripe for investigation by rock art professionals to confirm them and begin to understand the age of these enigmatic artifacts. They simply are not yet accounted for by current North American anthropological science.
Posted by Ken Johnston at 12:00 AM