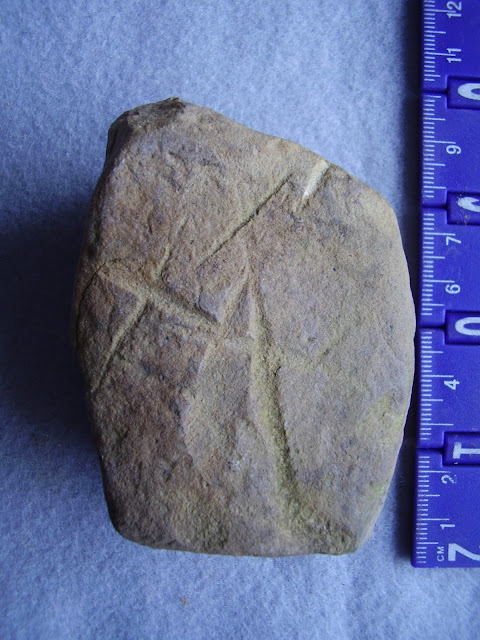 Another suspected art piece found in immediate proximity to the horse and lion figure found by Lyn Niday.  This is a Licking County, Ohio, surface find in an agriculture field by Ken Johnston. The intersecting marks are not plow marks. There are 5 "Xs" within the frame of the artifact, none on the opposite side.  A plow blade cannot be this selective and precise within a concentrated area such as this this artifact surface.  The patina of the X marks matches the overall stone so the marks were probably created before metal plow blade times which typically leave a fresher mark on the stone (as in circle). 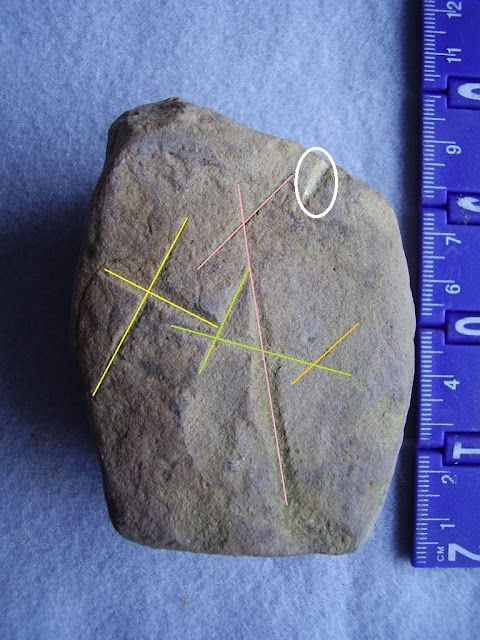 I suspect this could have been a visually narrowed Columbian Mammoth figure due to the overall mammoth shape of the stone and the treatment of a "bump" on the top of the head as seen on the upper left side of the artifact as pictured here. It is quite similar to the suspected "mammoth figure cupule stone" featured in a prior posting.

There may be more to graphics found on artifacts than first appears, as demonstrated by the work of John Feliks' "The Graphics of Bilzingsleben"

Columbian Mammoth reconstruction below.. Notice bump on head, slope of back, overall profile in line with the figure stone with X marks seen above and below.

Link to prior posting of artifact including similar mammoth shaped "cupule" artifact
-kbj
Posted by Ken Johnston at 6:45 PM