Newly discovered tool from Belgium may include a pierre-figuresrepresentation of a human face in profile, dated 450,000 to 300,000 BP 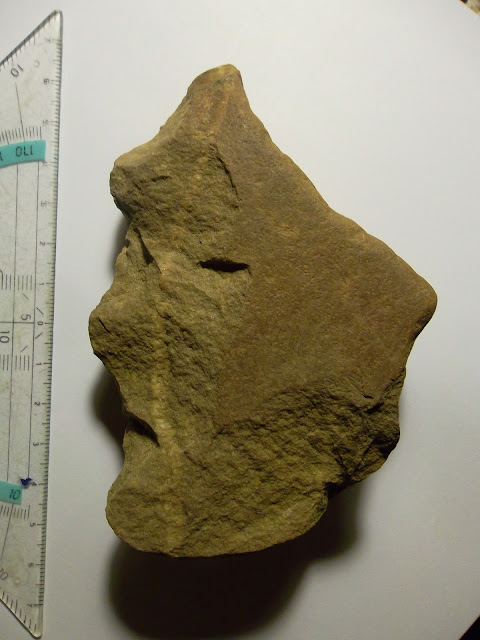 Newly discovered Belgian tool may include an intended pierre-figures representation of a human face in profile, and is contextually dated 450,000 to 300,000 BP 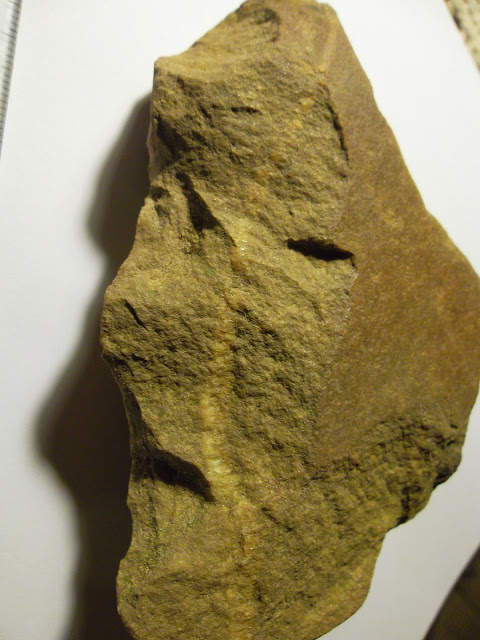 This artifact with possible intended human facial imagery was recovered in situ at Kempen, Belgium, in August, 2011.

Archaeologist L. Jimmy Groen of The Netherlands writes, "The artifact with a human face en profile probably had a double function, as it seems to be a side scraper as well. Three large notches were produced by flaking the rock under low angle in bipolar technique. The site circumstances are described at my website, but to make it easier here is some information.

Artifact was found in a large pebble tool assemblage in the gravels of the upper terrace ( + 85m /+90 m. a.s.l.) of the Maas/ Meuse river in the sandy region of the Belgian Kempen. The large numbers of artifacts were found in a local context of gravel and coarse sands, deposited by the river during late Elsterian periods ( Paulissen 1973). The artifacts do not show signs of transportation (such as rounded edges) so it is assumed they were locally produced, used and discarded. Such environmental setting could best be compared with a river "beach", where unsorted gravels were available, in changing dimensions.

Artifacts, found in situ at the site showed a position between the reworked early Saalian gravels/ eolian cover sands, while others were found integrated in the red oxidated horizons, locally known as "As paleosol", of Holsteinian date. This would place the artifacts roughly between 300.000 BP and 450.000 BP. For further information on the context see the article MA 4-project" (photos and comments at portablerockart.com courtesy of L. Jimmy Groen).

I note a feature of the artifact is an inclusion, a quartz vein, which traverses the height of the entire "human face" from the peak of the head, running between the "eyes" and exiting at the bottom of the jaw. The presence and location of this vein with respect to the facial features may be one element which speaks to the intent of the tool maker to also include imagery of a human face in the "tool." I am in the process of documenting a theory that during routine tool production fossils and inclusions such as this were encountered by the tool-maker, recognized and given some culturally mediated signification which motivated them to create visual imagery which was not necessary for the function of the tool, but may be thought of as a "decoration" (see work of James B. Harrod, OriginsNet link at side bar and at bottom of this post). 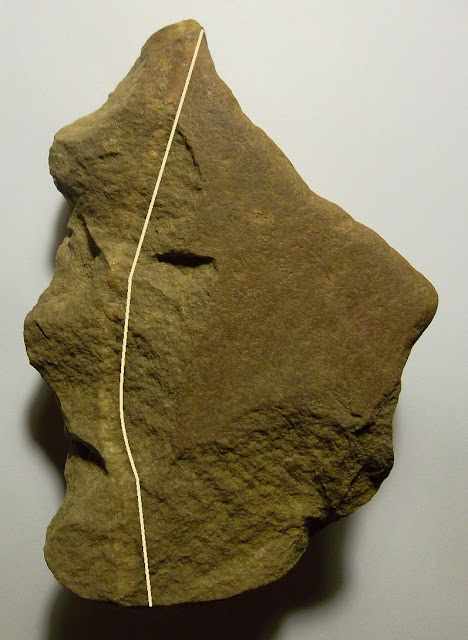 Original photo by L. Jimmy Groen has been modified by Ken Johnston to illustrate the quartz vein which runs through the artifact. The vein  may be seen just to the left of the white line.

The vein could have been recognized on the cortex of the stone exposed at the top of the piece and then stone material was very carefully removed to follow the vein all the way to the end of the pebble while making it the "center" of the face.