Altar from house No. 45, Lepenski Vir Ib, (Serbia), carved in the likeness of a fish, has several similarities with suspected Ohio mammoth "cupule" 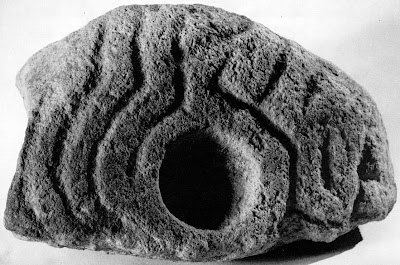 "Altar from house No. 45, Lepenski Vir Ib, Serbia, carved in the likeness of a fish, possibly a carp." -Don's Maps 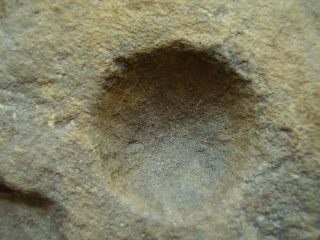 Close-up of "cupule" or hemispherical pit from the Ohio artifact
Don Hitchcock, Australia, writes at his excellent web site "Don's Maps": "Like the house foundations and the settlement as a whole, the sanctuary was organized according to a definite plan. The most complete manifestation of this appears in the arrangement of the above-mentioned sanctuary of the central house. There, in an area of 7.5 sq. m., the hearth has an axial position and the real centre is represented by the stone receptacle with a decoration in relief. Since the width and height of the entrance are approximately equal to the width and length of the sanctuary, the whole sacral area at the moment of sunrise could be revealed in a cone of first morning light as far as the sculptures which are placed at its end. A characteristic feature is that the sculptures, being the only verticals in the sanctuary area, are never subjected to the axial symmetry which the hearth and the stone receptacle suggest. They are never placed along the axis of the hearth, but always asymmetrically behind the stone 'tables'. Such a position stresses their privileged function, and their independence in the plan of the sanctuary."

Don's maps link to Lepenski Vir Ib site, Serbia. Don's Maps has another excellent photo of the above altar stone in situ. 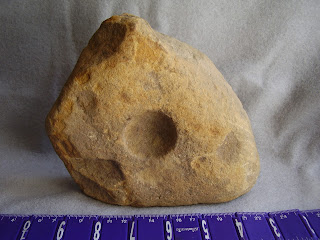 Ohio example with scale to compare to Serbian Mesolithic example
Link to prior posting of Ohio cupule stone suspected by Ken Johnston of incorporating Columbian mammoth imagery.  The Serbian example supports this idea by being a single hemispherical cupule on a relatively small, portable stone, with suspected zoomorphic symbolism (Serbia a fish, Ohio a mammoth) presented in a vertical display standing on a base in "correct" orientation.