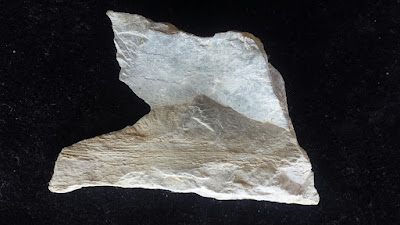 This sculpted piece of limestone may be interpreted as having at least two figurative bird possibilities. Much of the portable rock art featured on this blog incorporates two or more creatures, often exploiting the visual ambiguity of the stone or involving shared body elements or optical illusions.

Here a bird with tail at left may be interpreted as like a raptor while a second bird with head at left may be taken as like a goose. This could be a predator-prey pairing as is seen in other examples on this blog.
Posted by Ken Johnston at 10:50 AM