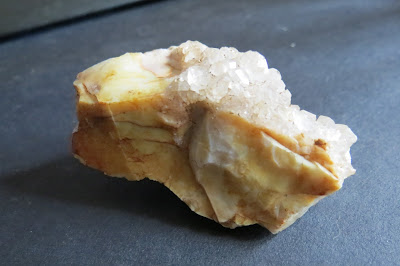 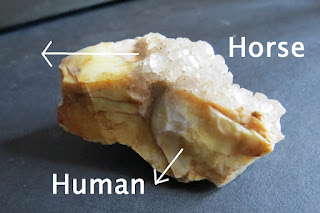 Animal 1 is interpreted as a 'horse head looking left' where the crystals serve as the horse's mane. The arrows illustrate the interpreted 'sight lines' of the horse and human head profile figures. 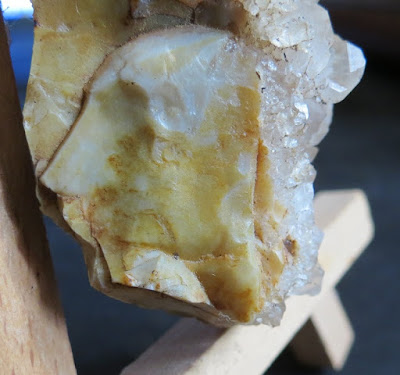 Detail of the human head 1 in left profile at within the 'neck' of the horse head figure. 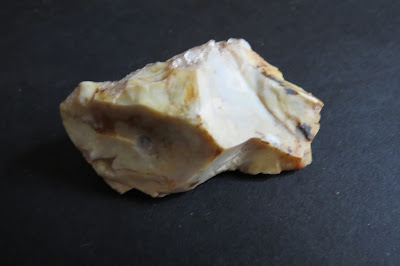 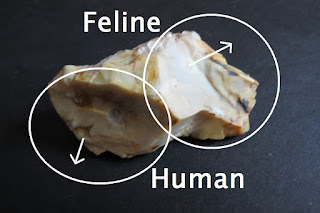 Side 2 interpreted 'feline head looking right' with, again, the human head as its 'neck.' The arrows illustrate the interpreted 'sight lines' of the creatures. 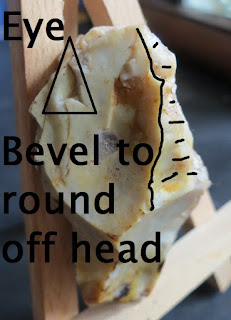 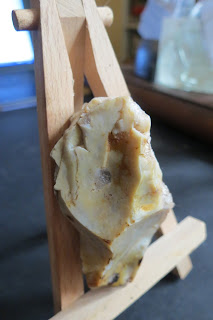 Side 2 human head left profile detail. It has a deliberate removal in the place for an 'eye' and the back of the head is beveled to round it off. 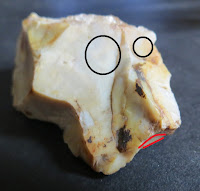 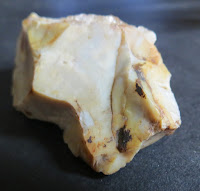 View of the interpreted feline head with illustration showing approximate locations of eyes and mouth on the figure. 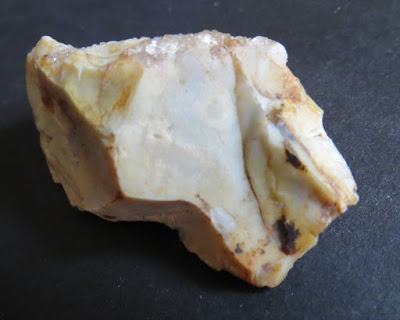 Feline head in another perspective 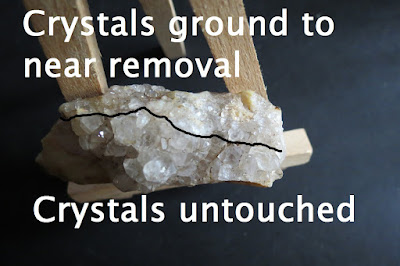 View from TOP. The 'feline' is on the ground crystals side and the horse is on the side with the crystals untouched. The crystals seem to have been removed from the view of the feline's head but retained to serve as the 'mane' of the horse figure. 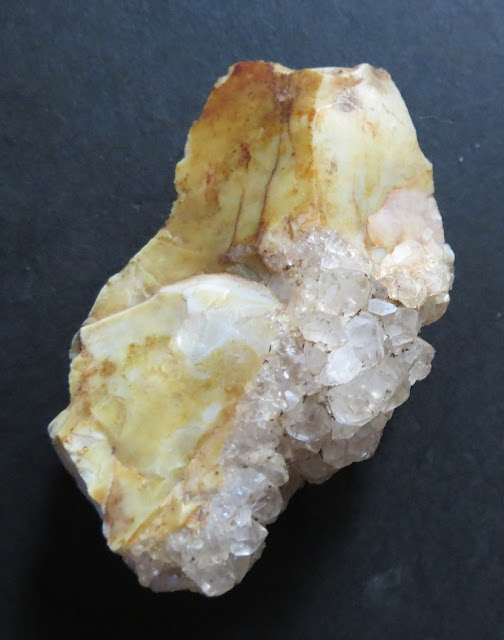 When the horse head figure is rotated 90 degrees left a bird figure with faint eyes and resembling an owl may be seen. The human is seen as looking skyward to the left at the bottom of the stone in this perspective. 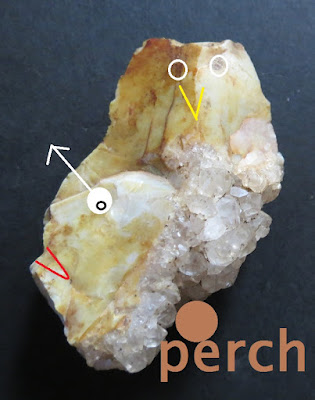 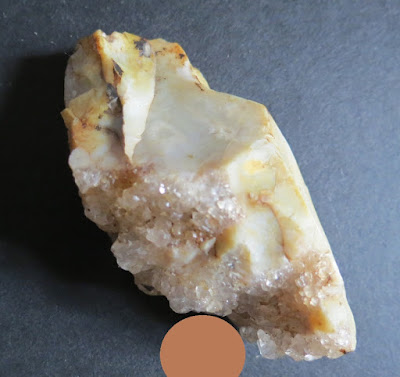 Bird number 2 becomes visible when the feline head is rotated 180 degrees. It has a long beak and hunched back like a vulture's.

The piece is an artifact with evidence of focused human retouch action all over it.

It was found in strong context of other figurative pieces seen on this blog which incorporate natural quartz crystal formations in the stone.

It has no apparent use wear as a tool and no tool attributes I can detect.

It has quartz crystals attached to the flint which would have made the raw material attractive for an object designed for visual properties.

There are two zoomorphic forms on opposite sides of the stone. The animals share 'mouths' along a bi-facial edge on the sculpture.

There are two anthropomorphic head forms on opposite sides of the stone. Like the animals, the humans share 'mouths' along a bi-facial edge on the sculpture.

The piece includes the known Paleolithic art motif of combining the heads of humans and animals- and does so twice.

In a third visage of the stone in a vertical position is a likely intended long-beaked bird figure.

In a fourth visage of the stone of the opposite side in a vertical position is a second bird figure.

This makes a total of six creatures represented on this one extraordinary flint figure stone. The artist's pairing of a feline with a horse could be a recognition of their predator-prey relationship or even an appreciation for the feline's work at delivering horse kills to scavenge.

Perhaps horses were desired for felines so felines would be less likely to predate on humans. We can only speculate with futility on the specifics but we can indeed recognize what must have been visual patterns of meaning in portable rock art from the past. 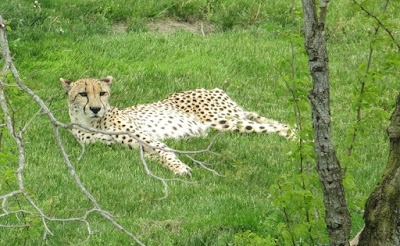 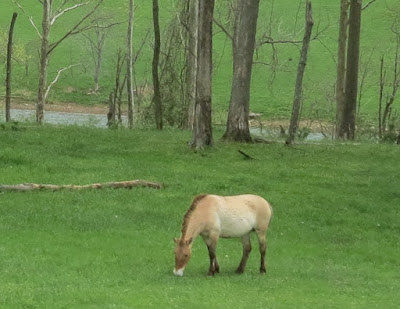 An African Cheetah and a Przewalski's wild Asian horse lounging at The Wilds conservation preserve in south east Ohio may be as close to the 'lion/horse drama' of the Ohio Ice Age which we can observe here today. Ken Johnston photos, Cumberland, Ohio, May 7, 2016. 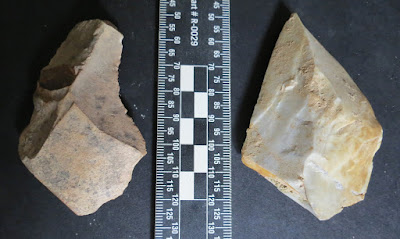 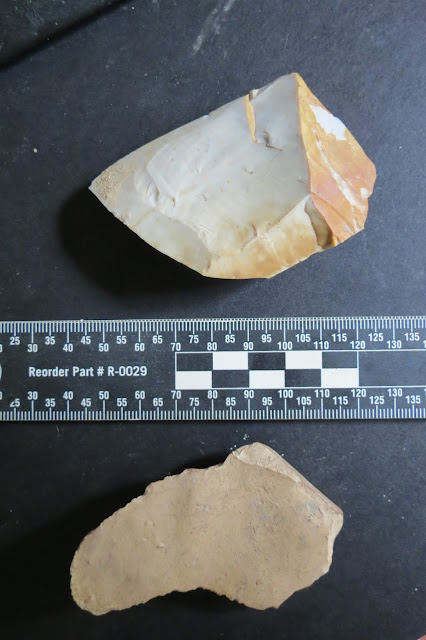 A Levallois-like blade and pointed scraper found at the Flint Ridge location of portable rock art finds supports the idea of the presence of a Middle Paleolithic-based art and tool complex. The pointed scraper has evidence of use wear consistent with animal hide or soft tissue processing.
Posted by Ken Johnston at 1:04 PM