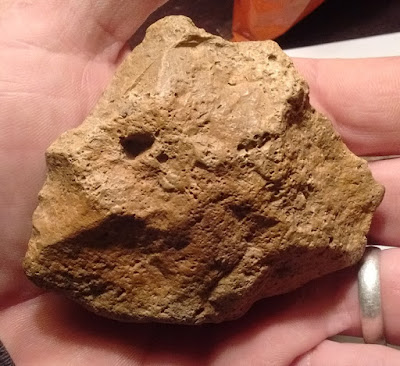 'Two hominin heads joined together at the back and facing in opposite directions'
Jason Lamont find, Hardin County, Tennessee, from his property along the Tennessee River at a confluence with a creek

In a portable rock art context Jason identified this as a rock with two faces on it, one looking right and one looking left. Paleolithic sculpture author Pietro Gaietto of Italy has described sculptures like this, sometimes with juxtapositions of anatomically modern humans with more archaic human forms. 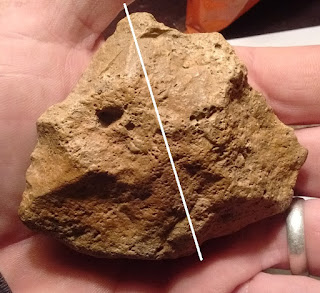 As Pietro Gaietto has described, I propose this Tennessee sculpture depicts a modern human face looking left and an archaic, or more robust, human type looking right with depiction of a brow ridge and more of a sloping forehead. 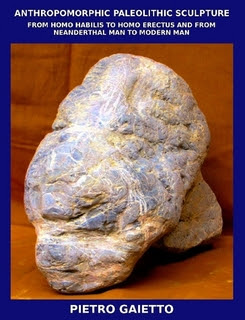 The number of Late Pleistocene hominin species and the timing of their extinction are issues receiving renewed attention following genomic evidence for interbreeding between the ancestors of some living humans and archaic taxa. Yet, major gaps in the fossil record and uncertainties surrounding the age of key fossils have meant that these questions remain poorly understood. Here we describe and compare a highly unusual femur from Late Pleistocene sediments at Maludong (Yunnan), Southwest China, recovered along with cranial remains that exhibit a mixture of anatomically modern human and archaic traits. Our studies show that the Maludong femur has affinities to archaic hominins, especially Lower Pleistocene femora. However, the scarcity of later Middle and Late Pleistocene archaic remains in East Asia makes an assessment of systematically relevant character states difficult, warranting caution in assigning the specimen to a species at this time. The Maludong fossil probably samples an archaic population that survived until around 14,000 years ago in the biogeographically complex region of Southwest China.
Posted by Ken Johnston at 2:44 AM