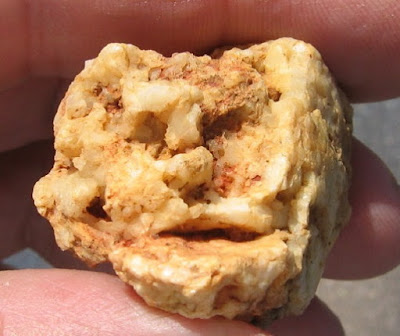 Thought you might like to see these rocks from the Doe River Valley of Carter County Tennessee. I was searching and trying to find out more about them when I found your site. You had several objects from Sherry Hill in Rittertown which is a couple miles upriver from me, here in Valley Forge. The stuff I find is similar. I interpret many of these as being turtle heads. I have humans, bears, birds etc. but more "shouting turtle heads" than anything. There must have been many people living in this valley over the years based on the stuff they left behind...  I think some of them were for entertainment, like stone age TV. I've had a lot of time to study these, been finding them for years. Some of them are remarkable feats of workmanship. -Chris Blumenstock 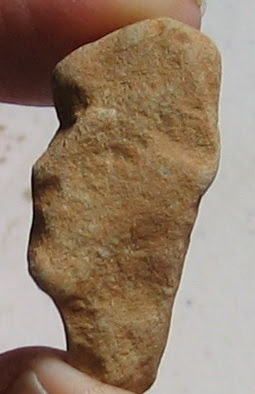 Human head in left 3/4 profile on a pebble identified by Chris. The face details have faded over thousands of years but are still detectable to careful observers like Chris. Nose, mouth, chin, eye, eyebrow and hairline may have been elements of this human portrayal. 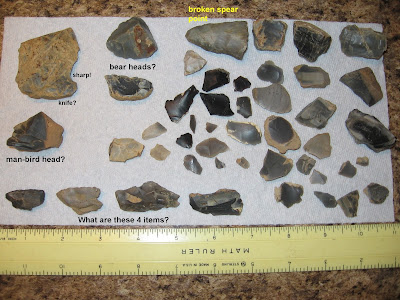 The "knife", upper left in the flint photo, looks like a snapping turtle head profile on the right edge and a hominid face profile on the left edge. -Chris 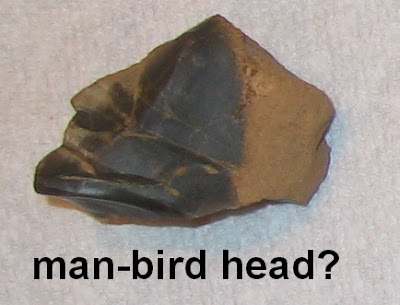 Chris identified this as a possible human-bird combination but I can identify this piece as demonstrating a Paleolithic stone sculpture motif of a combination of a human head profile looking left split with an animal (bovine, likely a woodland musk ox) head in right profile. This 'joining of heads' motif is seen in many examples on this blog and has been described by Paleolithic sculpture researcher Pietro Gaietto of Italy. 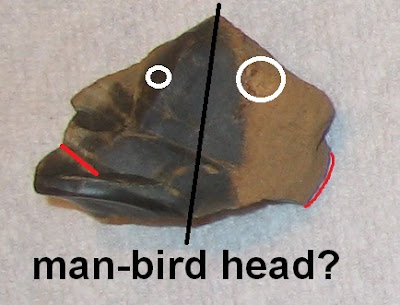 Ken Johnston illustration of the human head facing left and the animal head facing right. The animal's eye and mouth area are highlighted. This is consistent with Chris's observation about a knife in a photo above: The "knife", upper left in the flint photo, looks like a snapping turtle head profile on the right edge and a hominid face profile on the left edge. 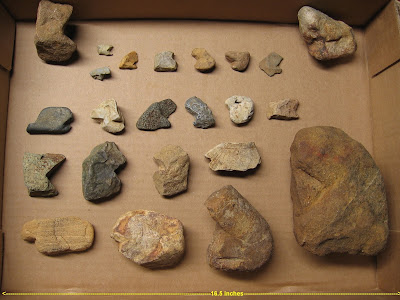 Frame illustrating a Doe River Valley pattern of notched pebbles described by Chris as 'shouting turtle heads.' These forms have also been identified by some other amateur archaeologists in North American portable rock art contexts. 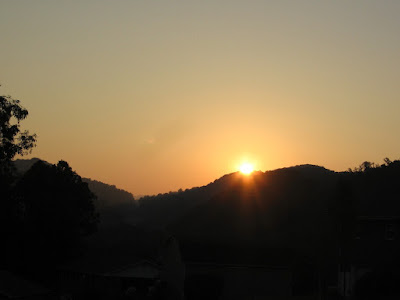 Valley Forge, Tennessee, photo by Chris Blumenstock
Posted by Ken Johnston at 9:59 AM