"In, On and Infinity:" Incised lines may represent ideas and concept modeling rather than evidence of tool function 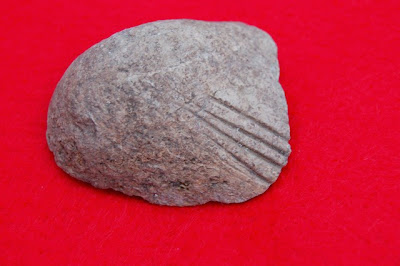 This find in Texas was interpreted as a tool but may be an example of straight edge use in a European Paleolithic marking tradition as seen in Germany and described by John Feliks in his paper "The Graphics of Bilzingsleben." Lower Paleolithic art and language traditions may have persisted for tens of thousands of years or people in North America could have independently developed their own marking schemes.

Amateurs find incised stones frequently but there is little or no consideration of potential symbolic meaning for the engavings. My hope is that the symbolic possibilities of stone markings will eventually be included in the hypotheses developed for objects like this in North America. 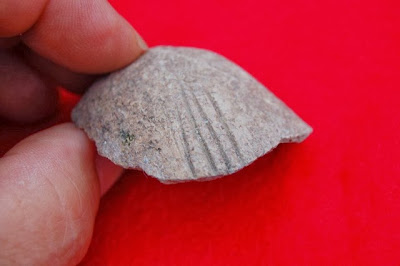 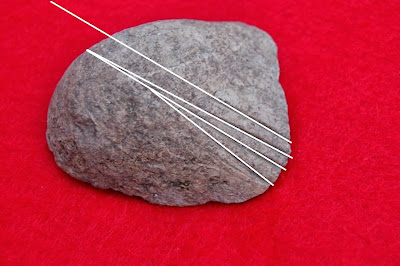 "In, On and Infinity," a geometric interpretation of convergent and divergent incised lines by Ken Johnston

As illustrated above these concepts could be described as: In (lines converge inside the stone perimeter), On (lines converge near the edge of the stone) and Infinity (lines never converge). These kinds of concepts are introduced in Feliks' work and it seemed I could develop a potential symbolic meaning for this Texas stone based on those concepts. It was quite strange when I saw the stone and it had this meaning, I felt as if I was intuitively reading a complex idea in a language Feliks had enabled me to recognize. Maybe more objects like this will come to light and show this possible 4 line pattern is more than a one-time chance occurrence.

Amateur and professional archaeologists in North America should avail themselves of the information available from other parts of the world and other temporal periods in order to have a broader range of possibilities in interpreting the meaning of incised portable rocks here.
Posted by Ken Johnston at 1:44 PM