Ohio Paleolithic biface has "pair of beaks," suggesting long hypothesized symbolic meaning of Clovis fluted points is as a stylized owl's head where the flute came to replace the specific eyes and beaks of the earliest forms

Ken Johnston surface find near Buckeye Lake, Licking County, Ohio. The base of the bifacial artifact resembles an owl head with carved beaks on both sides when turned point end toward ground.
(click photos to expand)

This broken Paleolithic biface with stylistic pre-Clovis characteristics was recognized a few years ago as being "owl-like" and as having seemingly manufactured, "beak-like," features on both sides in more or less correct anatomical placement. This 2nd Ohio Paleolithic "owl" point has a "pair of beaks," suggesting, along with the two-eyed example (see June 24 posting prior to this one), the long hypothesized symbolic meaning of Clovis fluted points is now further describable as a stylized owl where the flute came to replace the specific eyes and beaks of the earliest forms. The Clovis "base" became more concave in order to exaggerate the depiction of "owl ears" in order to remove any visual ambiguity about its form being of an owl. The eyes and beak of the owl came to be represented by the thinning fluting actions, perhaps as indicators/symbols of both individual stone working skill and the predatory stealth of the bird.

Maybe to artistically handle a cultural move away from shorter points, they were then expressed in the most beautifully extreme examples such as the Cumberland tradition with the "owl body" having a more fully exaggerated and stylized form and the flute continuing toward the tip of the point, as if "eyes and beak" are physically penetrating the flesh of prey. Cumberland may have been the original, "very sophisticated, stylized owl" form, from which less flamboyant Clovis "owl" points followed.

The suspected intended owl beaks are carved into the flint using a number of starts and stops which are evident in the "ziz-zag" nature of the compositions when viewed closely. One points to the right, the other points to the left. There may be some environmental matrix material adhering to the artifact inside the cracks created by the carve marks. 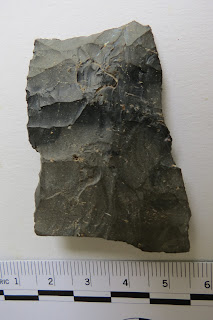 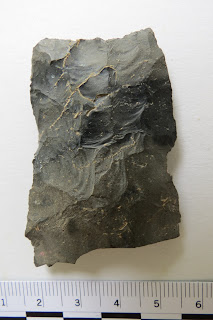 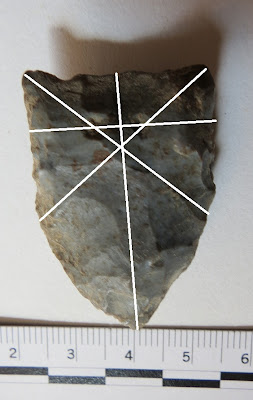 This markup on the owl-eyed Ohio Paleolithic biface from the prior blog posting suggests the placement of the indents is the function of the human mind that created the point rather than some freak of nature. There are no indents on the reverse side. These two indents seem guided and placed by an aesthetic sense of symmetry. What are the statistical probabilities of them being natural, having formed after the point was made, in these positions? Seem slim to me.