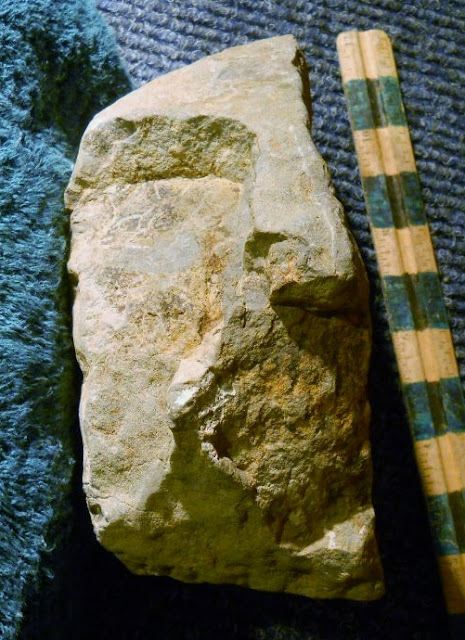 Avocational archaeologist Jim May finds at Washougal, Washington, at the mouth of the Columbia River Gorge. Half a face seen here, left eye missing. (scale in this posting is in inches)

These worked anthropomorphic stones fit a known pattern in paleoart. Jim May has also identified many small carved faces on other rocks from the area, some of which are available at his "Small faces" Facebook album here. Jim has been investigating this phenomena he detected six years ago without any encouragement until he started seeing similar finds identified by others on the internet. Despite many dozens of examples from a concentrated geographic area (the site Jim identified which has these stone fingures and two related sub-sites), his observations have been dismissed by the "pareidolia accusation" by archaeologists he contacted. Jim has now relocated himself and his collection to Arizona. 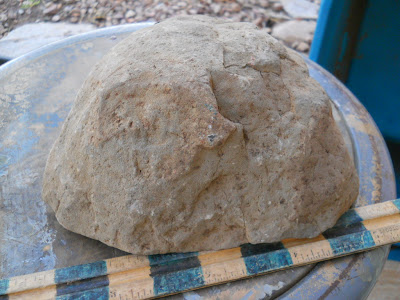 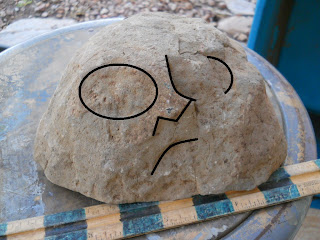 This subtle, simple face, with differentiation between left and right eyes and a "moaning" mouth, is a known world paleoart motif and has been seen on this Ohio boulder alredy posted on this blog among many others. It has also been seen on this blog as petroglyphic art identified by rock art investigator Luigi Ciapparoli in northern Italy.