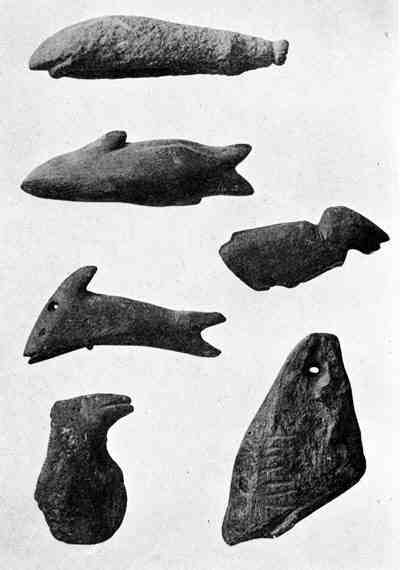 A photographic plate of zoomorphic sculptures from Warren K. Moorehead's Archaeology of Maine, published in 1922

Bob Doyle, an avocational archaeologist and accomplished flintknapper living in Maine, indicated he thought these types of figures are likely from the "Red paint people," a Middle Archaic maritime culture centered in Maine.

Maine state museum archaeologist Bruce Bourqe has studied the Red Paint People. "Dr. Bourque will present an illustrated talk focusing on his decades-long research about the Red Paint People, a group of Native Americans who lived 4,000 to 5,000 years ago in the area between Maine’s St. John and Androscoggin Rivers. “I have been fascinated by the Red Paint People and their unusual culture throughout my career,” says Dr. Bourque. “They lived by the sea and hunted swordfish. They buried their dead in large, orderly cemeteries that included graves filled with a red powder, known as ocher, along with stone tools and bone ornaments of exquisite beauty and craftsmanship. After about 500 years, these people mysteriously vanished. Studying the Red Paint People’s artifacts provides an important, though still inconclusive view of an intriguing early American culture, centered exclusively in Maine.” 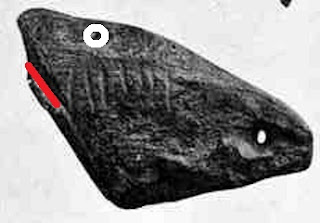 The artifact in lower right of the photo appears to be a shark head pendant, with a series of short, parallel incised lines serving as gill slits.