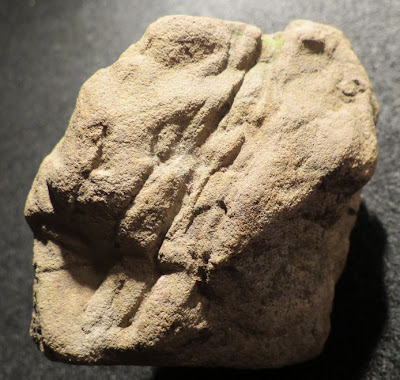 This figure stone was found on the surface in disturbed soil at a light construction area. Crude tools and lithic debris supporting a former cultural site were also identified. The same site produced a couple of other suspected sculpted stones last year which were subjects of postings on this blog and worth reference here because of their contextual support for the prehistoric intent of an artist to create the imagery I am describing here in this piece. Several other pieces from this site were identified this Spring and will be seen here in the future.

This piece demonstrates a combination of proboscidean imagery with human head and human facial profile imagery as is similarly seen in the posting just prior of the find of Jim May, at Wahougal, Washington. The Ohio find and the Washington find are separated by 2,200 miles, including the Rocky Mountains. 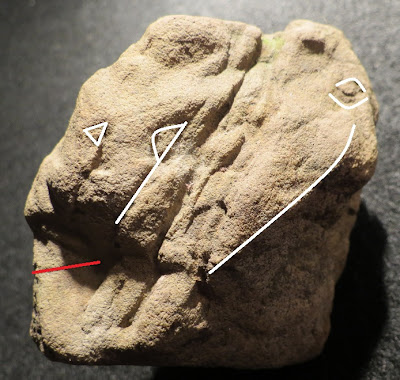 The human mouth line, eye and ear, along with the proboscidean's eye are marked up in this photo. The elephant's tail is also the nose of human face. The sloping trunk profile is seen in the contrast of light and shadow seen in the diagonal line in lower right. (click photos to expand and compare) 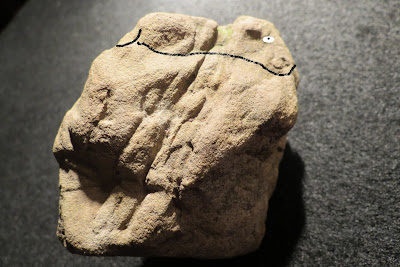 I identified what appears to be an expression of a further describable motif I detected on two prior figure stones posted on this blog. It could be named "lion atop prey animal." I highlighted the visual line of the bottom of the feline and its tail in this photo and added an eye for orientation to the animal. The ear and the nose and mouth of the cat are worked features in the stone. The nose and mouth of the lion is also the eye of the elephant. The material is sandstone and it is weathered by time in the elements. 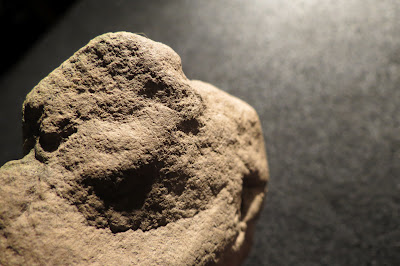 The lion figure head resting on paw as viewed from the reverse side of the stone, like the "Spinx" position. 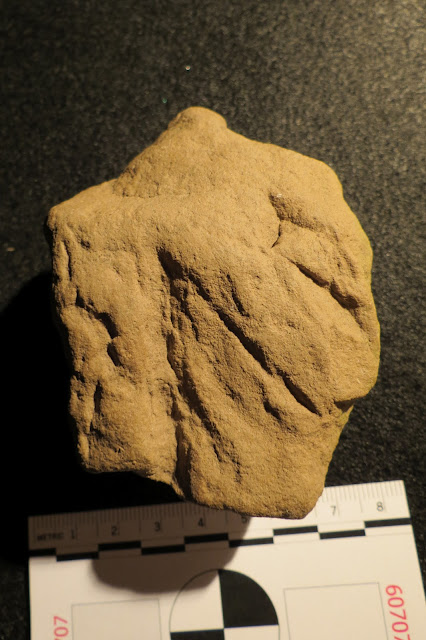 Side two of the figure stone has two deeply incised lines intersecting and terminating at their intersection to create a distinct "v" form. These markings support the artificiality of this piece. 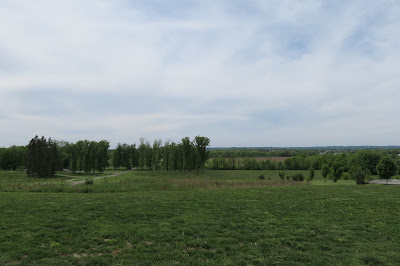 View from the hilltop site which produced this figure stone. Looking west across the Licking Valley from the western edge of the Appalacian plateau.