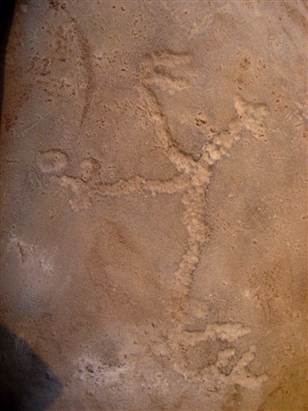 Can these archaeologists really claim with any degree of certainty this image repersents a human being? On what basis? It has some vague similarity to a possible human interpretation but it could also represent a lizard, more than one creature or a map of a body of water, or nothing but insignificant "doodling." A large phallus? Pun intended, that seems like a stretch.  I don't see all this so clearly and if I rely on archaeological investigators to tell me what it is or what I should be seeing, I expect to be able to find it plausible. 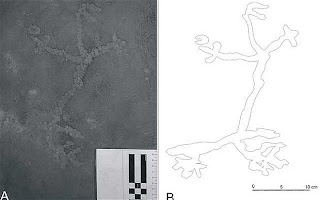 Just because an image is proclaimed to represent a particular form by professional archaeologists does not mean they haven't been subject to the pitfalls of pareidolia, accusations which they readily hurl at amateurs who have also identified visually ambiguous objects. A case in point is this just identified rock art from a cave in Brazil, which is believed to be the oldest rock art yet discovered in the Americas at around 9,000 to 12,000 years old. It is not a portable piece, it is parietal, or wall art. However, its early date and rough association with an Australian Aboriginal type skull in Brazil makes it interesting and relevant to issues of portable rock art.

A generalized point I'd like to make is that the same image could be discovered by professional archaeologists who can make authoritative interpretations of the images and even claim "probable" uses of the images based on no ethnographic or scientific data whatsoever. Amateurs who bring images and objects like this to the attention of archaeologists are most often dismissed as "just seeing things."

Robert G. Bednarik has written an article about Creating Futile Iconographic Meanings. Here is a quote from the article:
"By far the most common interpretation of meaning in rock art is the iconographic interpretation of motifs by the observer. We are told what the beholder of the art thinks it depicts. In many cases, the motif has such outstanding diagnostic features that these identifications do sound convincing, but in many other cases the picture is not at all clear-cut. Moreover, many researchers define various aspects of the motif in an entirely subjective fashion: they tell us that the subject is running, falling, swimming, pregnant, praying, dead or whatever else they happen to perceive in the art."

More appropriately, this cave art should be characterized more so like "A suspected zoomorphic or anthrpomorphic form with possible phallus." According to Bednarik, ascribing prehistoric meanings after so much time is not generally possible, so the statement "probably linked to some kind of fertility ritual" must be dropped.

The significance of a man-made image dated this old in South America should not be lost in all the bad information from archaeologists which accompanies the big news.

(2/26/12 post publication note: I have made a comment received and my reply a part of the posting so they are not missed)

You are right, but the original paper has no such interpretation ("fertility ritual"). The figure is anthopomorphic because it is standing and has no tail. Moreover, you have to know the context: there are several "C-shaped" head anthropomorphs in other portions of Brazil , they are holding clubs, having sex, etc. So, the intepretation of the figure being a man with a hard dick is very sound given the general context. Of course you can express your opinion, but it would be helpful if you had more knowledge on the topic. About the nickname, I believe scientists can show a bit of sense of humour once in a while...

I agree, it would be helpful if I had more knowledge on the topic, and it was not provided by these archaeologists. In archaeology, context is king. There was no information like this presented in the articles I read, thank you for clarifying. If you read the hundreds of comments left by newsreaders of several publications which released this news, the overwhelming majority have had the same reaction as I did, including several self-admitted archaeologists. Why include the information if you cant support it with the context background? A petroglyph of that age is significant itself. Archaeologists may think calling something a "little horny man" will help publicize their find but from the reaction of readers, they think this entire story is BS. So the great significance is missed because the archaeologists included questionable information with no context information. I question interpretations of "holding clubs, having sex" etc. This is an anthropomorph because it has no tail? Big jump there. You say the figure is standing, the archaeologists say he is sitting or squatting. Which is it? This is the problem trying to interpret meanings in this old material. In this image, it appears the creature may be holding a "C head" as you describe in his right hand. How is this explained? I say don't worry about it, it is human-made and dated, and is significant regardless of various differing interpretations made.

More comments I am including in the body of the post so they are not missed:

Samuel Feb 28, 2012 02:27 PM
Yes, I agree. It is man made and dated. All the rest is about primate (= humans doing science) behaviour. Some context, if anyone is interested:
(En Portuguese)

Ken Johnston Feb 28, 2012 03:06 PM
Thanks Samuel. With the context information you have provided, this concept is growing on me. Additionally, my theory after having thought about this, is that the "c-headed" figures you describe from Brazil may actually be representations of the human hand as we see today in "shadow puppets." The artist would possibly have fire in the cave for light and simply by holding up the arm and hand between the fire and the cave wall to make a talking puppet. Rather than real humans, these images may depict "spirits" emerging from hand puppetry. It allows the artist to transform himself into another being, then that being was committed to the permanence of the cave wall.

I may have already identified a North American similarity to the c-heads in an artifact from Tennessee, titled "Kermit..." as in Kermit the frog hand puppet. My thinking was this object represented a human hand in the basic hand puppet shape.