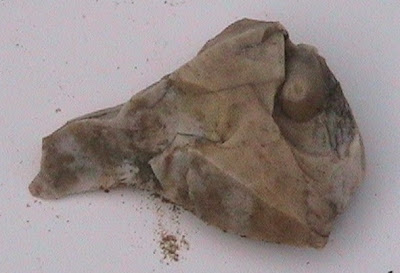 This artifact was found among other figure stones at a site near Buckeye Lake, Ohio, which has produced more than a dozen suspected flint bird heads and other mostly bird sculpture forms. The site is mostly covered now by a paved rest area along Interstate-70. If this creation is accepted as a "bird in flight" as I think was intended by its maker, it may have been inspired by the bulb of percussion and ripple found in the piece of flint. It is as if the bird is taking off into flight and leaving an egg in the nest. (Click photo to expand detail.) 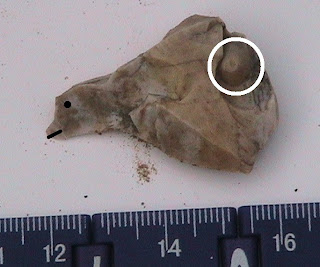 The bulb of percussion (symbolically perhaps an egg in the nest or sun in the sky) in the flint is circled in white, eye and mouth illustration added to the suspected flying bird for visual orientation 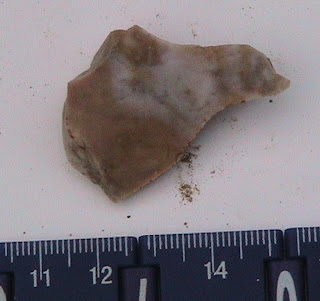 There is a remarkable similarity shared here with the head of the suspected flying bird in the prior posting which seems to reinforce the possibility they are both intended depictions of flying birds, perhaps made in "the same tradition." This artifact was found about 15km from the Flint Ridge site of the prior posting, but is made of Flint Ridge material as well.