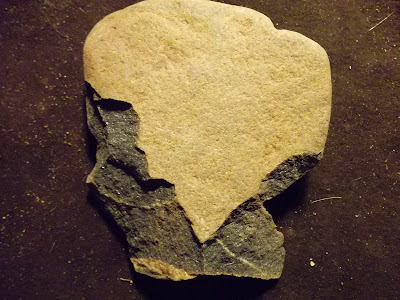 This artifact was found directly associated with flaked coarse tools at an archaeological excavation site in the Belgian Kempen and stood out for archaeologist Jimmy Groen because of its anthropomorphic visual qualities. Questions remain to be answered: were artifacts like this intended or recognized simple images in the past? Only with detection and documentation of such possible/suspected art at archaeological sites can patterns which may help confirm artifactuality begin to emerge. This stone could be interpreted as a human left facial profile where the cortext (lighter colored, smooth, original, natural rind) of the rock has been left in place to represent its likeness to hair on the head.

Groen writes: "As far as I can understand it, decortification of quartzite pebbles has been commonly applied in the tool technology of controlled flaking in the Belgian Kempen area. In fact, instead of real "flaking" this technique is based on slightly, carefully, trimming the pebble's surface, to remove both the cortex as well as parts of the inner structures, to get the desired shape of the pebble. I've noticed this on several unifacial and bifacial flaked pebble cores. Most usual this has been done to achieve a chopping tool, but trimmed edges occur also in unifaces.... So it is clear the making of such a shape, like the profile of a human face with this typical 'hairdressing' is a deliberate process."

Richard Wilson, a figure stone scholar from the U.K. and publisher of http//palaeoart.com, writes: "He (Patterson, 1983) places value on recognising the patterns that characterise artefactuality including frequency: Even if nature can produce lithic objects resembling simple man-made items, nature is not likely to do this often. Therefore, the frequency of occurrence at a given location of specimens with similar morphologies is important in demonstrating probable manufacturing patterns. Production of numerous lithic specimens with consistent morphology is certainly not a habit of nature.”

Please see Jimmy Groen's web site, Arbannig, for more details on the archaeological context of this find. Mr. Groen discovered and identified the Kempen Stone Face nearby, which also represents a human face in left profile. 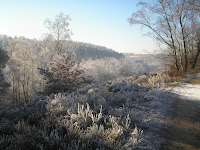 The Belgian Kempen region is home to the archaeological work of Groen and was home to some of the earliest peoples in this part of Northern Europe.  Groen continues to work the Kempen area which produced this artifact and it will be interesting to see what other visually ambiguous artifacts he may find. If he does, they will be reported here. Thanks to Jimmy for so generously sharing his artifacts and observations with portablerockart.com.