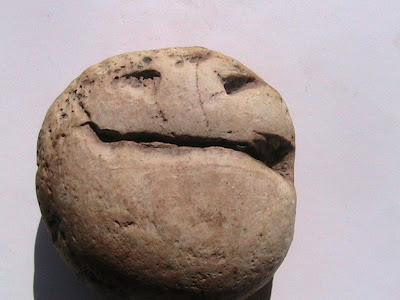 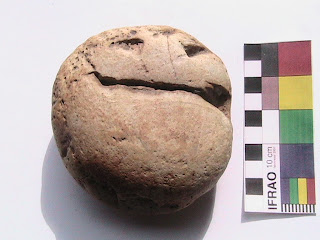 Mr. Dennis Boggs of Irrigon, Oregon, has been collecting suspected crude tools and figure stones for fifty years on the valley floor above the Columbia River and below desired locations on mountain terraces to camp, observe migrating animals, etc.

This example was examined under 10x lighted magnification and there appears to be intended work on both eyes and the mouth.  The stone was likely pre-historically found to be suggestive (the crack itself of the mouth looks natural) and then was “rectified” to complete it to the desired end form of the artist.  The entire length of the lower “lip” has been worked to turn the harsh edge of the crack into a more a more smooth, natural one.  This gives the upper lip an appearance of projecting slightly beyond the lower lip.  The smoothing of the lower lip cut another angled surface, like taking a 90 degree edge from face into mouth crack and topping it off with a 45 degree slope.  This slope has been worked but it has also been heavilly rolled (weathered, tumbled in abrasive soils, worn away somewhat) so it looks more rounded today than a 45 degree angle upon rectification.

Both corners of the mouth were expanded with stone modification to represent 'smirks.' The eye on screen left looks to be human-expanded  from a smaller natural indent. The eye on screen right may be wholly manufactured by a chisel type instrument.  Perhaps a couple of small pebbles may have been inserted in mouth crack to represent teeth but they could have been naturally stuck in the crack due to erosive wear.  What could be interpreted as a small “tear” is leaving the inside corner of the eye on screen left. He looks to be laughing ‘till he cries. 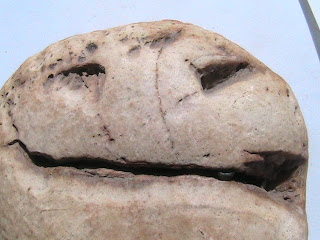 In the photo at left, a lighter band of stone along the lower lip area shows where material was removed to alter the natural crack.  There are two vertical lines between the eyes perhaps etched to represent a nose.  The visual "flow" of the nose matches the "flow" of the face toward the larger grinning side.

In the Boggs Collection, there are also items I might not find in Ohio or from my mostly eastern U.S.A. contacts.  Sperm whale, grey whale, killer whale and porpoise are represented in the Boggs collection.  One anthromorphic and one zoomorphic figure stone artifact will be posted in coming months where in addition to photos, there will also be demonstration of these amazing "joke" or "entertainment" figures in moving video on YouTube.
Thank you Dennis Boggs for submitting such an emotive human face figure stone and for making your collection of thousands of suspected artifacts available for close examination and study to us in Ohio and elsewhere.  We will be busy for a very long time.  More of the Boggs collection will be seen here, as it demonstrates themes and artifact types similar to finds at sites in the mid-west and eastern U.S.A., Europe and Asia. 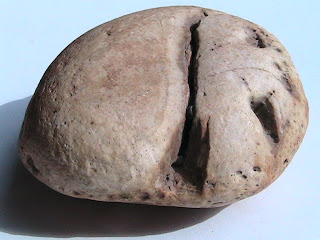 The view here is along the  mouth crack from left side of face (photo bottom) to right side (photo top).  The light stone band along the lower lip is where stone was removed to open the mouth up a bit.  A good shot of the dimple area modifiction here, or an expansion of the left end of the mouth (photo bottom). 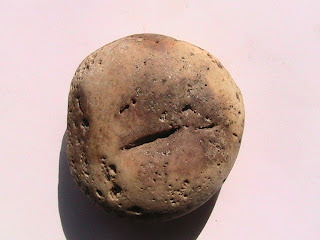 Back side of the artifact.  Although it appears it could  present a second face, examination did not reveal any clear human work.  A face on the reverse of a relatively explicit face image should be considered for artifactuality.  However, without evidence of human modification here, it remains an unanswered question. It may be that analysis using magnification beyond the 10x I commonly use, along with the interpretive expertise to use that technology on stone, could shed more light on this.  -kbj
Posted by Ken Johnston at 3:48 PM

Email ThisBlogThis!Share to TwitterShare to FacebookShare to Pinterest
Labels: Boggs, OR, smile