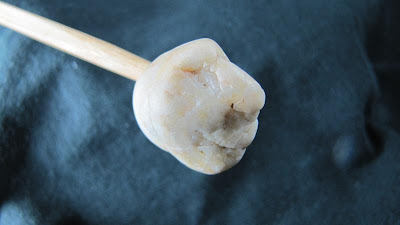 Human head facing right, with a grin and a dimple

Allen Deibel of Canfield, Ohio, U.S.A., identifies this worked pebble as "almost comical."  The artifact seems foretelling of the illustrations of early-mid 20th century humorist, illustrator and cartoonist James Thurber of The New Yorker and The Saturday Evening Post.  It is known that prehistoric peoples used cartoon-like exaggeration to convey more meaning than otherwise possible in the often small and rounded medium of stone.  For cave art examples, please see figure 4.24 in Barbara Olins Alpert's book The Creative Ice Age Brain, including the Roc Saint Cirq caricature head and more. 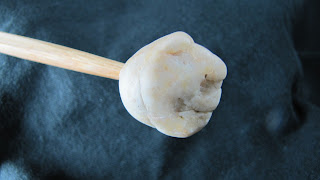 If one moves viewing angle slightly and shifts visual attention from the cartoon face to translate the "dimple" and the "base of nose circle" as eyes, a feline-like visage emerges where the feline and the human are sharing the same mouth and chin, feline facing straight on toward viewer on a vertical pole orientation of 5 and 11 o'clock.  Allen has identified significant use of feline motifs, in particular, in the Mahoning River valley and surrounds and has amassed a collection of hundreds of pierre-figures from north-east Ohio.

Deibel has composed a fine collection of line drawings of his artifact interpretations.  These line drawings will be of great assistance to anyone new to the portable rock art subject. If you are looking at artifacts here and thinking "I don't see it," the drawings will illustrate how the visages are interpreted by Allen and others.  The images are often comprised of combinations of color and relief in the stone material and are sometimes difficult to capture and communicate in photos.

He has also perfected the technique of figure stone presentation using chopsticks, a fine example of this innovation seen above.  Work of James Thurber below. 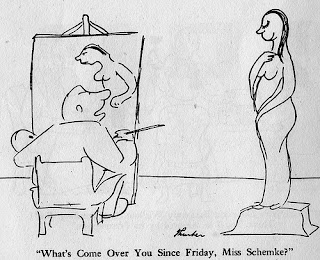 "What's Come Over You Since Friday, Miss Schemke?"