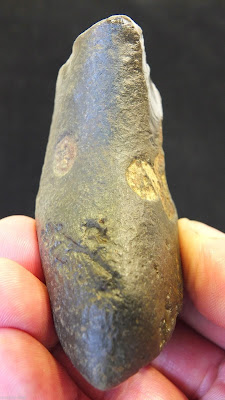 "Circa: 600,000 - 400,000 years B.P Made by Homo heidelbergensis. Found at Northfleet, near Swanscombe, Kent. The tool is partially bifaced and worked with a curved distal point, most of the tool remains cortical for grasping. This tool probably belongs to the Clactonian phase of the Lower Palaeolithic. It is in superb condition with clear working detail and even patination. Length cm: 8.5, Width cm: 3.5, Thickness cm: 4, Weight grams: 128" 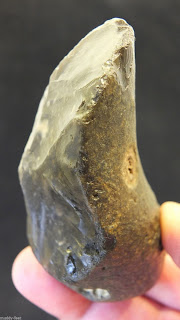 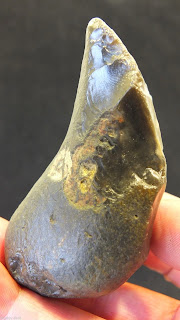 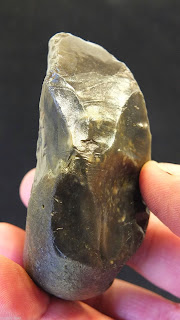 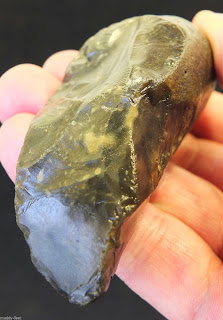 I propose the human face icon in the top photo is created and included in this tool by the maker to add an enhanced visual dimension or animation to the stone. The nose and mouth features have been deliberately created to make a simple face on the edge of the tool where the two fossil inclusions become the 'eyes.' It appears the same crinoid stem is exposed on the two sides of the stone. It could be described as the known motif "decorated handaxe in the Acheulean tradition." Other examples also exploit fossils as facial features. The face is located on the functional handle of the tool which would come into contact with the fingers while the tool was in normal use.

The nose in this example is a regular circle which required focused directed stonework. The mouth is rectangular with a 90 degree intersection of lines.

Cultural imperatives may have suggested the tool maker select this stone for a tool because of the unique fossil exposure which could make for easy decoration of the tool edge with a simple facial likeness.

The November 2014 discovery of a shell from Java which had been engraved by Homo erectus has changed some mainstream attitudes regarding the possibility of art behaviors by early humans who in some circles are still characterized as ape-like. Just like the shell in the British Museum, we can look to current collections of "tools" to explore the possibility of the artistic inclusion of images and icons in these very old artifacts.
Posted by Ken Johnston at 12:17 PM