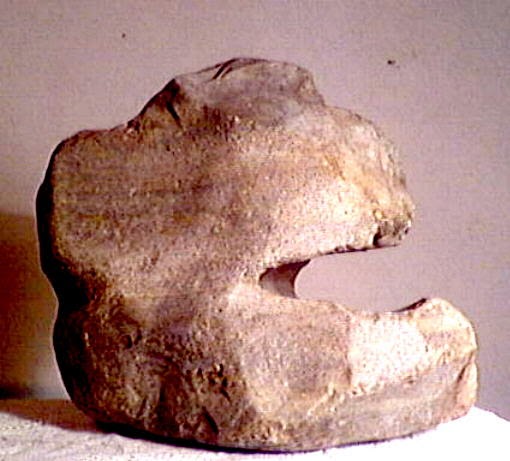 Gaietto writes: "Fig. 4.9) Lithic Sculpture. It represents the head of a hominid with great opened wide mouth.
Size: Height cm. 23.5, width cm. 29, width cm. 18.5. The mouth is wide cm. 17 in the inside and cm. 7 in the tip of the jaw, and is deep cm. 11. Obtained from a large nodule of silex. Weight kg. 11.5.
Place of originrigin: Torrent Romandato, Rodi Garganico, Foggia, Italy.
Material culture: Acheulean or middle Clactonian, or perhaps more recent.
The sculpture has been obtained from a nodule of silex, in which the cavity that constitutes the open mouth is part of the shape original of the nodule.
The strong expression has been interpreted in the typology like " scream ". The stylistic deformation is based, exactly, on the scream.
A study on this sculpture and others two similar, by Pietro Gaietto, (Fig. 4.7 and 4.10) entitled " The shout of Homo erectus " is published on " Paleolithic Art Magazine ",(2000).

Collection Museum of the Origins of Man. 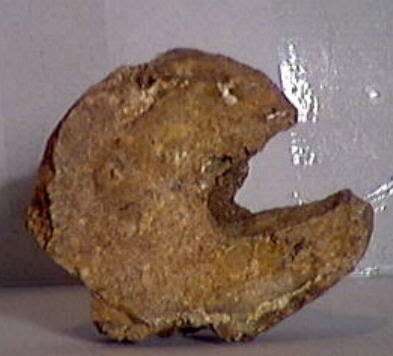 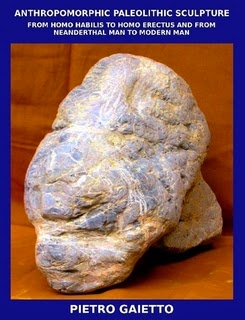 Last week I received a note from a Texas ranch owner which included the following. I added the emphasis in bold type.

"There is a huge limestone rock approx 75 lb with a big centipede fossil stretching across the entire rock. Near that rock are massive metates weighing over 200 lb. I found a Metate/mortar weighing approx 30 lb that had a lot of wear and in the middle of the bowl are two perfectly drilled holes about 4 inches apart that go all the way thru the rock. I'm guessing it's for drainage which is interesting as I've never seen a Metate with holes. Near that Metate I found a large piece or nodular flint with the bottom being completely flat to where it can stand up perfectly. After examining the rock I noticed that it was one large owl statue with a lot of smaller owl faces that look almost subliminal. Every single rock I pick up in this area, no matter if it's limestone, flint or quartz, has some kind of art on it. Every single one. Mostly owls, buffaloes and weird faces.

You're going to think this is weird but I have found a couple of these faces that look exactly like pac-man. It's the damnedest thing I've ever seen.

I think this was a worship or ceremony site as it's unlike anything I've ever seen. I think it's possible they were worshiping that centipede fossil. Anyways, I just want to thank you because I thought I was losing my mind until I ran across your site. There's not much online that covers this subject except for you. Just wanted to say thanks and see if you might have any insight or if you've ever heard of anything like this?" -Texas ranch owner