Minnesota artifact exhibits classic mammoth profile iconography, the Golden Ratio and is a probable palaeoart sculpture in light of a human face figure 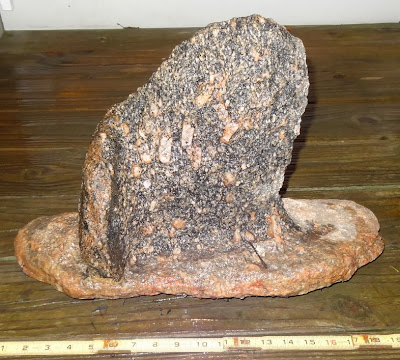 "Minnesota mammoth standing on the ground with a human face on its posterior"
photos by Mark Jones, artifact from Gibbon, Minnestota
6.8kg, 53cm wide to 33cm tall = ratio of 1.606

This ratio of measurement of width to height in the sculpture approximates The Golden Ratio of Phi, 1.618. This object was sculpted to Golden Ratio proportions (1.606) demonstrated by John Feliks to be visually desirable to humans for hundreds of thousands of years.

Mark Jones of Glen Burnie, Maryland, is a fossil hunter and artifact collector whose figure stone find and interpretation "Kissy Birds" was featured in my first article on this blog. Several other of Mark's finds from Piney Point near the convergence of the Potomac River and Chesapeake Bay have also been featured. Mark contacted me today regarding a friend's anomalous artifact find from Minnesota. They could see the object had been worked but did not know if it could be a tool, some kind of art, a trail marker, etc. and asked for my opinion on it. 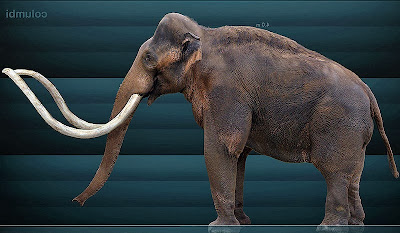 The artifact struck me as having the classic mammoth icon shape seen in other portable rock art sculptures seen on this blog and elsewhere. It appeared to have been chipped along its edge to produce the shape of the rough outline a mammoth. The mammoth is depicted as standing on the ground which is a flat, elongated surface acting as a base for the vertical mammoth figure. 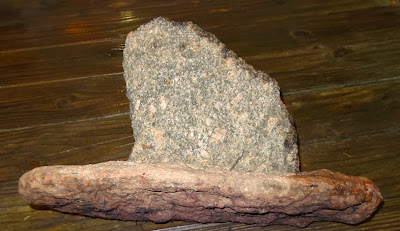 To support the idea that this is a Paleolithic mammoth sculpture, I interpret a worked human face figure on the posterior of the overall mammoth shape of the stone. This is in line with this same motif seen on other examples and in sum they are not attributable to coincidence. They are attributable to a robust North American palaeoart tradition which produced identifiable patterns of symbols and symbol arrangements on stone. 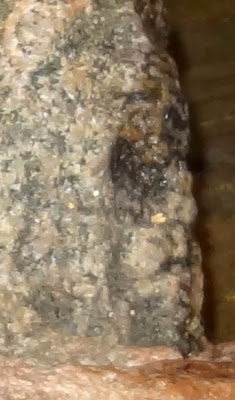 "Human face right profile on posterior of mammoth icon."
Close up of worked human face on lower right edge of the sculpture as if on the mammoth's "leg"

To quote Jan van Es from a posting made about an Italian mammoth sculpture from Montarsolo on 8 October:  "In many sculptures of animals (bear, elephant, bison, etc..) is a portrait by the legs visible. Here I see a man's face by the hind legs." This mammoth also exhibits a face in the place of the mammoth's rear leg and supports van Es' interpretation of the Italian artifact and others.

Objects like this can have value to us even as surface finds with what would normally be considered weak archaeological context. Portable rock art can have what I call "self-supporting context," where there is more than one element of the same piece which have "art" attributes and each these elements should be considered as supporting the veracity of the interpretation of the piece as a whole. The mammoth profile and the human face I interpret here would have more limited value if they were the sole potential art elements of a piece. But combined together on the one piece, with physical placement in "correct" position compared to other known forms, they make a most compelling case in support of an art interpretation.

View of the bottom of the "base" of the sculpture.

Amateurs will continue to serve up examples on silver platters like this until some good scientist determines it is time to be looking for these kinds of objects in situ. If they do not look, they will not find. I am confident if they do look more closely for art attributes in all stone material at archaeological sites they will find a world of symbolic information left in stone by our ancestors- an art world that can inform us more about our human past than the technological tool sets which are the basis of our current archaeology.

"Although incised cobbles are common at the Gault site, portable art is otherwise rare at early New World localities, and, in either case, this art emphasizes simple geometric patterns rather than the naturalistic portrait style that characterizes much (though not all) of the portable art in the European Upper Paleolithic. Given the difference in the nature of the early portable arts of these hemispheres, there is no reason to expect parallels between their rock art corpora, and good reason to doubt that similarities would exist. Even though there may be occasional examples, early New World art apparently simply did not emphasize (now extinct) megafaunal species, but most likely for cultural reasons rather than due to chronology alone."

The above statement, which also reflects the current consensus of Archaeology regarding figurative portable rock art in America, now stands refuted. -Ken Johnston
Posted by Ken Johnston at 6:52 AM