Acheulean handaxe from the Sahara, west Africa, interpreted as including a facial profile of a monkey-like creature like other examples noted by Ken Johnston on this blog.

These kinds of Acheulean "decorated handaxes" have been documented by scholars and amateur archaeologists in Europe for several decades and are predicted to be found in existing archaeological and museum collections if time and care is made to inspect for them. Some of the facial profiles are human and some are animals. 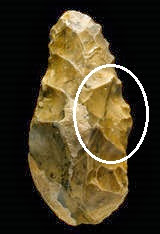 Face profile on middle right edge on this handaxe from Dunbridge, Hampshire, was featured in an earlier posting on this blog. The handaxe is centered on stone cortex (light feature) which was intentionally retained by the artifact's creator. This face is similar to the new identification from north Africa above. 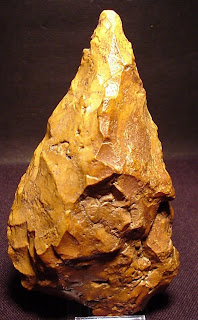 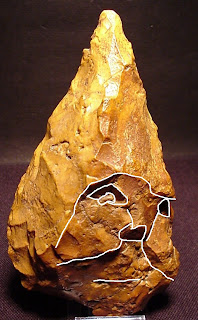 Another Sahara desert Acheulean handaxe which appears to have an area worked out to present a face of a creature, perhaps a human or feline. 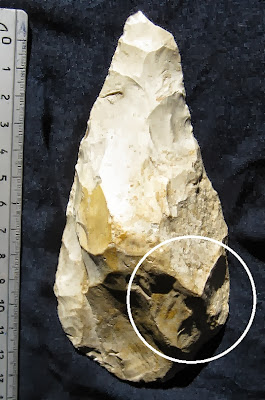 A European handaxe identified in an earlier posting compares favorably to the new handaxe from Africa above it. Both have anthropomorphic/zoomorphic faces on the lower right edge.

The "fish mouths" interpreted on two artifacts a couple of postings ago were also in this approximate position, hinting that these so-called tools also served as a kind of display frame for expression of symbolic zoomorphic forms.

John Feliks, a co-founder of the Pleistocene Coalition, has demonstrated in a series of falsifiable proofs that homo erectus was highly intelligent and creative:

"Hence, the following advanced cognitive qualities may be quite easily assumed for the species Homo erectus by way of geometric analogy: interrelationship sensitivity and complex organizational skill; language; use of metaphor and hidden meaning; philosophy; mysticism or other “spiritual” perspectives; and a general ability to discern, appreciate, and create the most subtle nuance within any area of intellectual endeavor." 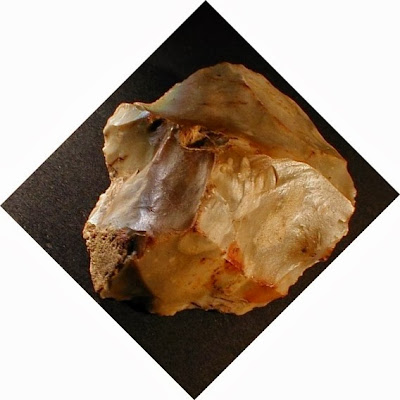 Baboon head depiction on a handaxe. Part of the stone's cortex was retained to depict the animal's nose and mouth.

Here is an example of a baboon head depiction I discovered on an Acheulean handaxe from the Île-de-France, along with a human head depiction on the obverse, which was featured in an earlier posting.
Posted by Ken Johnston at 9:44 AM