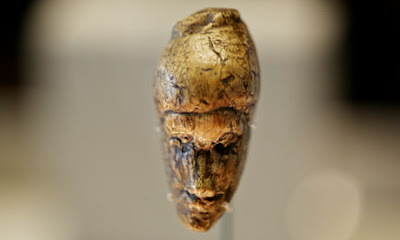 "It's smaller than your thumb: a little piece of mammoth ivory delicately carved into the shape of a woman's head. But this miniature sculpture, with one wonky eye and rather elongated, slightly Modigliani-esque proportions, is the oldest known portrait in the world, and is about to go on show to the public for the first time in Britain in a new exhibition at the British Museum, Ice Age Art: Arrival of the Modern Mind.

Some 26,000 years ago, in a valley teeming with game in what is now Moravia, a man or woman carved this little head with skill and not a little persistence, using stone tools to smooth away the recalcitrant, hard ivory.

According to the British Museum's curator Jill Cook, "The reason we say it is a portrait is because she has absolutely individual characteristics. She has one beautifully engraved eye; on the other, the lid comes over and there's just a slit. Perhaps she had a stroke, or a palsy, or was injured in some way. In any case, she had a dodgy eye. And she has a little dimple in her chin: this is an image of a real, living woman."

With all due respect, the museum is mistaken because they describe here an example of a trans-Atlantic Middle Paleolithic start motif, known to astute figure stone investigators in Europe and America as "one eye open, one eye closed or missing."

As an aside, Karon Schwab, an amateur archaeologist from Idyllwild, California, contacted me a while back. She had found so many one eye open, one eye closed, figures she had concluded the prehistoric peoples who lived in her locale had a genetic condition creating the disfigurement. Dozens of other amateurs have made similar observations, all to be ignored by mainstream archaeology orthodoxy.

The "dodgy eye" statement will cause a chuckle for all familiar with this motif, with many examples seen on this blog (search "one eye") and described by others, including James Harrod, Ph. D., at originsnet.org. The eye may be more than dodgy, it may be symbolic and embedded with cultural meaning.

Dr. Harrod writes (pers. comm.) 'One day I had the opportunity to hand the 'one eye' sculpture, that Ursel Benekendorff sent me, to the late Roy Scheider, a skilled actor in TV, movies and Shakespearean stage. I said nothing other than: "what do you feel this stone is saying". He said (paraphrase) that it felt like the tragic vision of King Lear, one eye open is witness to all human doings and human suffering, one eye is closed in pain and and anguish over the human condition; also one eye looks inward, one outward. Also as the head is like that of a child, it also speaks of maintaining spiritual innocence facing the human predicament. I am reminded of the proverb of Jesus: 'Be wise as serpents, innocent as doves.'"

This culturally mediated carved ivory item is an example of a meme which was repeated for thousands of years. So many more examples survive in stone. Have all the wooden ones perished?

To make an extraordinary archaeological claim of "the oldest known portrait of a woman," hopefully not to sell more exhibition tickets, the museum sees it upon itself to determine, "absolutely" no less, the features on the figure represent a unique individual. I have read at one time an account that said this carving was found in proximity to the skeletal remains of a woman with a matching facial disfigurement. If this was correct, it is much more likely the woman "matched" the art motif, maybe as a kind of living embodiment, than the art was created as a portrait of the woman.

Museum curators and archaeologists who claim special knowledge and who are not aware of the most common observations among amateurs in their field jeopardize their own credibility and risk misinforming the public. 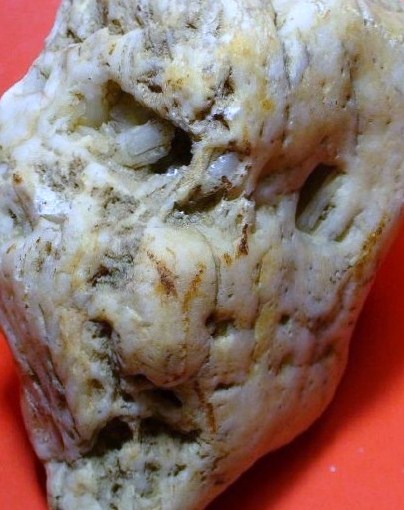