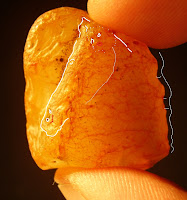 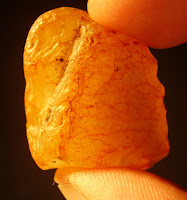 Archaeologist Jan van Es of the Netherlands discovered the type site at Boukoul and defined the “Boukoulian” micro industry (most under 2cm) of tools and art. I consider him a mentor and he has been very generous with his time and knowledge with me over the past couple of years. I had detected a mammoth icon on each side of the piece and a vague human face profile on one edge which I was not confident enough to mention in the prior posting. Jan took a look at my photos and detected a horse head image nested in the mammoth form. He also described the human face profile on the posterior edge of the mammoth. He has illustrated these forms with markups on the photo above, left.

This is significant to me because I have already described a human face profile on the posterior an Ohio mammoth form (and other animals and birds) which was found in an art and tool context.

Also, I just recently described a mammoth form “framing” a rocking horse head sculpture (with galloping horse soundtrack) which has been masterfully interpreted and documented on YouTube by portable rock investigator Dennis Argaut of France. So mammoth combined with human head and or horse may be a describable pattern in portable rock art in Europe and America.

This kind of art is “almost invisible” (Alan Day, Ohio) to our minds today, even when looking for it. I was encouraged by a recent visit to the National Gallery of Art where I saw examples of art in the most minute forms, with focus and execution of detail on wonderful micro scales.  It helps me to understand a possible human desire to recognize, or rectify, imagery on something as difficult for us to detect as a small, seemly meaningless, stone flake.