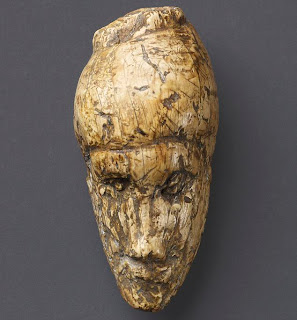 The British Museum is promoting an exhibition of Ice Age art and released information which the Daily Mail and other news outlets have carried:

Face of the 26,000-year-old woman! FIRST EVER portrait of a woman was carved into a tusk of a woolly mammoth (and it's smaller than a thumb)
-New Ice Age art show will include the earliest yet found representation of a woman's face
-4.8cm tall carving is so detailed experts believe the subject may have suffered a stroke

In the prior posting I demonstrated how the features observed and described on this carving are not unique to it and are probably not an actual portrait of a real woman as the British Museum claims. It is probably not related to the disfigured woman triple burial found at the Dolni Věstonice site, seen in photo below. 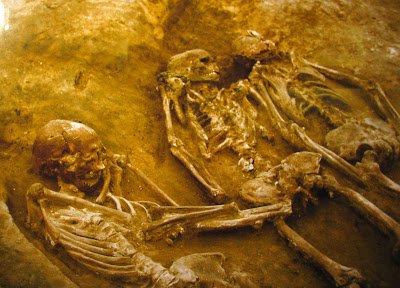 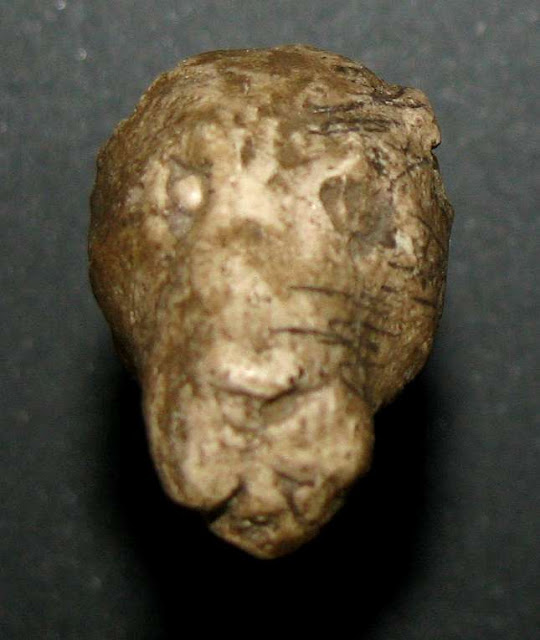 This ceramic feline head from the Dolni Věstonice site (photo by Don Hitchcock) also exhibits differences in the expression of the eyes, matching the ivory carving of the human head and face which also shows the known portable rock art motif of "one eye open, one eye closed or missing." It is almost always the left eye.

This ceramic artifact, from the same site, calls into question the British Museum's claim of having identified the first known portrait based on its "absolutely individual characteristics." The facial characteristics the British Museum described as "a dodgy eye" are not unique to the ivory carving in any way, and are not even unique to the site which produced the artifact they plan to display as "a real woman's portrait."  My personal opinion is that this claim should be publicly corrected and withdrawn. Or, might the British Museum suggest this lion may have suffered a stroke? 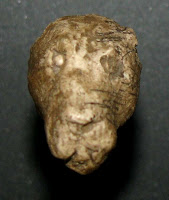 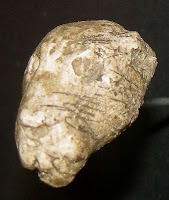 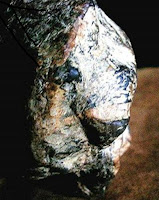 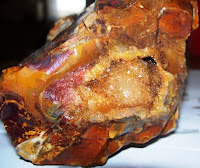 Compare these two suspected rock feline heads to the two ceramic feline images directly above them, respectively. To my eye, they compare favorably as "visages" of the feline form seen in ceramics. The one on the left is documented by portable rock art investigator Denis Argaut, France. The flint and crystal feline head at right was found by an anonymous rock collector at Flint Ridge, in Ohio, USA. It is thought to be a representation of the American Lion as seen in an earlier post.

Ceramics may be used to inform other finds- from ivory artifacts to suspected portable rock art pieces.